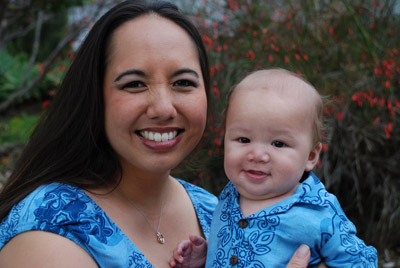 As Executive Director, I am in charge of all operations to keep this non-profit running. This includes directly communicating and working with the Board of Directors, writing and administering grants, organizing fundraisers, overseeing the day-to-day finances of the operation, giving educational presentations to school and community groups, overseeing volunteers, working with partners, maintaining our organization’s website and regular administrative duties.

While I was a UH-HIP intern (1997), I was stationed at the Hawaiian Islands Humpback Whale National Marine Sanctuary. The fishpond site for our non-profit is located just in front of the Sanctuary office and I’d stare at it each day. I worked closely with the volunteers as they began forming the non-profit to restore the fishpond and I was naturally pulled into the project. Since 1997, I have always had a desire to work with the restoration project and have done just that. I was vice president of the non-profit for about four years and now have a lead role with it. I also think that it was a calling for me because when I look back at past Hawaiian families who shared ownership rights to the pond, my ‘ohana name, Näkoa, is listed. Coincidence? I don’t think so…..

How did you get there?

I took advantage of each and every opportunity that I could. While working for various organizations, I made numerous contacts and have used that rapport to my advantage and have created a very good working reputation for myself in the environmental field here on Maui. I also kept an open mind and did volunteer work without expecting anything in return. By offering my services to others, that helped me meet new and exciting people, introduced me to different fields that I didn’t think much about in the past, and has allowed me to feel that I have accomplished a lot in my life. Money isn’t always everything (but it helps :).

Since this is the first time that ‘Ao‘ao O Nä Loko I‘a O Maui has had an executive director, it is new grounds for all of us. However, my qualifications came from years of volunteering my time toward the project and taking a leadership role during a majority of those years. In essence, I had been in the role of executive director for years but had done it on a volunteer basis and without the title. Today, I have the title and am able to be paid for my services. Volunteering really paid off for me in the long run!

One of the best rewards that I gain from doing my work is knowing that I am making one of my dreams come true. Being involved with the restoration of the fishpond for almost a decade, it was difficult to see that there was so much to do, yet very little help/know-how to get it done. That’s part of the reason why I spent thousands of hours writing grants, reports, performing educational presentations, etc. There just wasn’t anyone else available to do it regularly. Therefore, my position allows me to take care of all the work that I’ve hoped to have had completed in the past.

I’m also fortunate enough to be able to work at home since we do not have a formal office space at the site. It’s great to know that I don’t have to fight traffic in the morning to get to my job.

Finally, the best reward for me is that I am able to share this experience with my family especially my young son who will grow up along the shores of Kö‘ie‘ie Fishpond as his mommy “goes to work”.

I start around 8:00 in the morning by checking and responding to my e-mails. Then, I review the very long list of “things to do”. Usually, it involves continuing to write a grant, reading our environmental assessment and other documents to be sure that we’re adhering to our duties for fishpond restoration, calling government agencies or banks to work out our insurance, contacting teachers in regard to upcoming school visits, etc.

By noon, it’s time for a quick break and lunch. Usually my son and I will take a quick walk to the mailbox to mail things from the morning. Then in the afternoon, it’s back to checking e-mails and doing the “to do” things. I usually finish work by 5 p.m. or take a break during the day and return to my computer to finish off my hours later in the evening when the baby is put to sleep. Those times are dangerous because my brain works best after 8 p.m. and if I’m not careful, I can easily work till 2 a.m.!!!

The world is made of many different types of people who have many different types of opinions and lifestyles and come from different backgrounds. Being a Kamehameha graduate, I unconsciously grew up thinking that I’d always be surrounded by Hawaiians. When I hit the real world, that definitely was not the case and I recall being amazed as I entered my UH-HIP internship project on the first day, and I was the only local person around. I felt out of place and shy but realized that it was a new challenge and I took it head on. I found that by being open to new attitudes, cultures, and lifestyles, I could take the good things that I learned and incorporate it into my life. This has made me a better person a very versatile in the type of people that I can communicate with and befriend. I can be extremely professional and speak good English to the head of the US Dept. of Commerce, then I can meet a braddah at the fishpond that same afternoon and rap some good ol’ fashioned local pidgin!

I think that Sharon bestowed all her wisdom upon me when I first began my lifelong friendship with her in 1997 that so much of my success is due to her perseverance and belief in me! Piece of advice – listen to Sharon and her great staff!!! I did and it worked for me : )

Take every opportunity you can while you have the chance. You’ll never know that you don’t like it if you don’t try it. Be open to new experiences and new people. You never know when that person will give you your career job or become your husband/wife!!