Visit Hawaiian Volcano Observatory for details about this earthquake, and information about earthquakes in general.

This seismogram is provided courtesy of USGS Hawaiian Volcano Observatory.

The Hawaiian Volcano Observatory (HVO) has over 50 seismometers located across Hawaiʻi island. The seismometers detect earthquakes, and send the signals back to HVO where they are recorded either on paper or electronically. The paper record above is a copy of a seismogram from a station located in the Kaʻū Desert, and it represents the time period from just before 9:00 am Saturday morning through 8:58 am Sunday morning.

The Saturday part of the record is very quiet; there are a few small earthquakes of low magnitude (M 1.3). Then at 7:07 on Sunday morning, the M 6.7 earthquake occurred. The quake was so large it produced a “clipped” record - where the pen is not allowed to swing to the full amplitude of the quake, lest it break; hence, the first several minutes produce a uniform-width record, and then the amplitude decreases. Seven minutes later, a second large quake occurred. This one is also “clipped”. 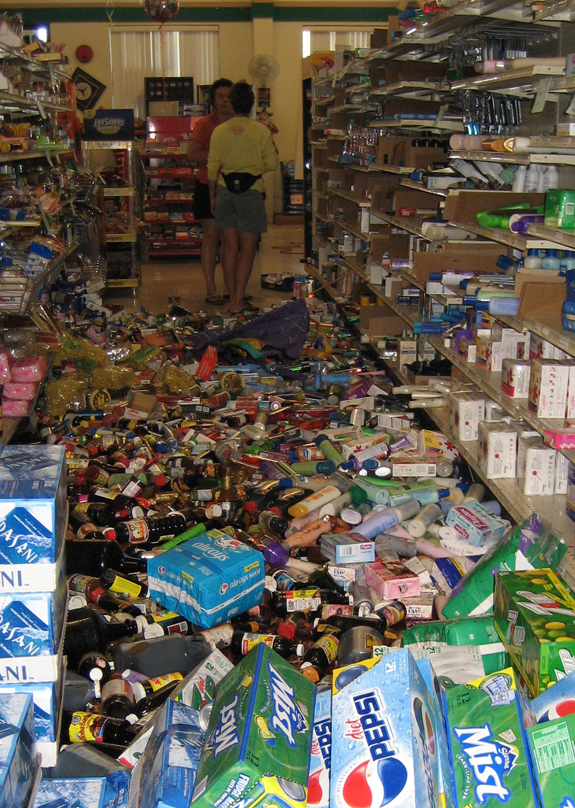 Shortly after these two large quakes, there were many smaller aftershocks. These are seen on the paper record overlying the traces of the M 6.7 and M 6.0, because as the drum rotates, new earthquakes leave their mark on top of old ones, producing a layered effect.

The M 6.7 was felt for 60 seconds by people near the epicenter, and for 20 seconds by people in Volcano Village. But the quake actually lasted 45 minutes, as seen in the DES record - the “tail” of the M 6.7 earthquake is visible across three lines, or three drum revolutions of 15 minutes each.

The island of Hawaiʻi experiences many earthquakes that are volcanic. Most of these earthquakes are detectable by seismometers, but are too small to be felt. Volcanic earthquakes are related to magma moving around underground, which may erupt on the surface as a lava flow, or may intrude between cracks in the rock underground. In both cases, the island gets bigger.

Digital seismic records contain much more information than those from seismic drums.

However, the M 6.7 earthquake occurred 38 kilometers below ground, and was felt across the State. This was a lithospheric earthquake because it occurred near the base of the tectonic plate that Hawaiʻi is built on. Because the Big Island is getting bigger every day, the plate underneath flexes beneath the island's weight, just as a trampoline flexes under the weight of a gymnast.

The location of this earthquake surprised many people, since large magnitude quakes occur more frequently on the southern half of the island. But if you push your fist into a pillow, you will see lines of deformation that radiate out in all directions. Although the weight of your fist is greatest in the center, the “earthquakes” you have produced on your pillow have formed in several locations around the edges. Likewise, earthquakes can occur anywhere on Hawaiʻi island, so residents always need to be prepared for earthquakes.

The Big Island will experience more earthquakes in the future, and some of these will be larger than M 6.7. In 1868, the island was rocked by an earthquake estimated at M 7.9. The Richter Scale is logarithmic - each whole numerical increment represents a ten-fold increase; a M 7.9 earthquake would be over ten times as strong as the one experienced on October 15.

It is not possible to stop an earthquake, and there is no way of predicting one. This means that people have to prepare in advance. This web site describes how to prepare: how to keep things from falling off shelves, how to strengthen your home's foundation, how to make an emergency supply kit. And of course, an emergency supply kit will also be useful after other natural disasters (hurricane, tsunami), as well as power outages. Once an earthquake starts, it's too late to brace your bookshelves or secure your home's foundation; you have to make these improvements in advance. Act now!