Secure Free-Standing Bookshelves to the Wall

If your bookshelves are free-standing, they could easily fall over during a large earthquake, injuring anyone who happened to be adjacent, especially a small child. Don't take that chance! Inexpensive metal L-shaped brackets are available at your local hardware store, and they're easy to install. One side attaches to the bookshelves, and the other side attaches to a stud in your wall. 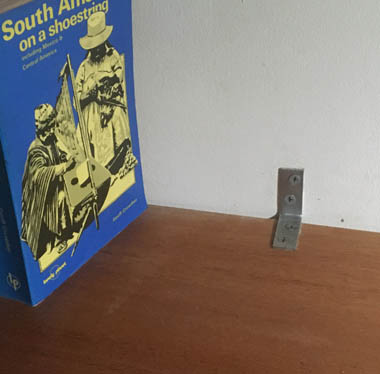 The L-shaped bracket secures your bookshelf to the wall. 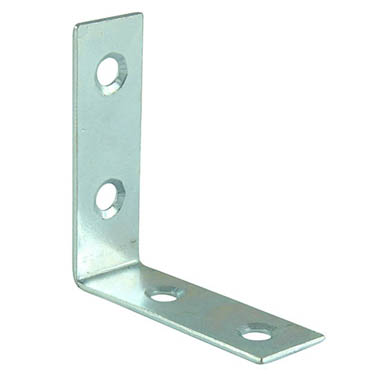 A corner brace, or L-shaped bracket, is inexpensive.

Even if your bookshelves are securely attached to the wall so they couldn't possibly fall over, what do you store on them? Are you storing anything heavy that might fall off and injure someone standing nearby? If so, it might be a good idea to remove those items and keep them somewhere else. 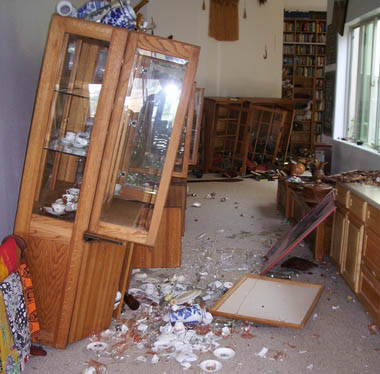 China dishware crashed onto the floor in the 2006 Kiholo earthquake, since the cabinet was not secured to the wall. 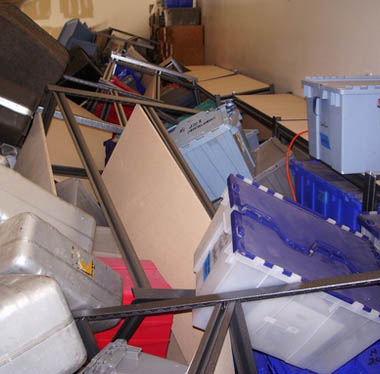 In the 2006 Kiholo earthquake, the shelves and their contents fell over.

If kitchen shelves are open and exposed, all of the items stored there might fall off during a large quake, including dishes and glassware. To help alleviate this problem, you could create a "lip" on the shelves, such as a thin strip of wood on or near the edge of each shelf, that would make it more difficult for things to fall off.

In the case of kitchen cabinets, you might also consider installing latches on certain cupboards. During a large earthquake, it is possible that the items inside the cupboard could be sent flying with enough force to knock open the cupboard door.

Also attach large top-heavy objects (such as televisions and computer monitors) to the desks or tables on which they are standing.

Watch the video! Auntie Lita explains how to brace up your bookshelves.

The earthquakes of 10/15/2006 caused extensive damage on the Big Island. Houses shifted off their foundations, rock walls collapsed, and items on shelves (sometimes the shelves, too) were sent crashing to the floor. Don and Kerrill Kephart, Kohala area residents, provide this advice:

We noticed a few trends that might be of interest:

At the end of the day, however, it is just stuff. We would rather see the whole house reduced to a pile of rubble than see something happen to each other or one of the grandkids.

Damage to the Kephart Home

In the Kephart's kitchen pantry, many items fell from shelves during the large earthquakes.

Kitchen shelves that were not secure fell to the floor.

It's easy to install a lip across the front of shelves. Even a lip that is only an inch tall can keep wineglasses from sliding off.

Place silly putty, velcro, or surfboard wax under breakables, to keep them from falling off shelves. Add a thin strip of wood as an additional barrier.