Hurricane Season is from June to November, so be prepared. In August of 2016, we had a close call with Madeline. Steve Businger of UH Mānoa has a great description of Hurricanes in Hawaiʻi, including an explanation of the fortuitous shearing effect of winds aloft vs trade winds that occurs adjacent to the island chain.

New! IVHHN Vog Dashboard has all the information you need about vog.

The Center for the Study of Active Volcanoes is a training and outreach program located at the University of Hawaiʻi at Hilo. Our emphasis has always been to provide information on volcanic hazards that occur in Hawaiʻi and worldwide, but we have expanded our program to include other natural hazards as well: earthquakes, hurricanes, floods, tsunamis, and brush fires. There are many web pages that describe the science of natural hazards, and we provide links to these pages. Our hazards web pages emphasize natural hazards in Hawaiʻi and the mitigation steps you can take to protect your property, home and family. You can't stop a natural disaster, but by preparing now, you can lessen its impact on you.

Our thoughts and prayers go out to the residents of Puna who lost their homes in the eruption of 2018.

The Geology Department at the University of Hawaii at Hilo is proud to have played a small role assisting the USGS Hawaiian Volcano Observatory indirectly, with monitoring the eruption. Because of the extraordinary timing of the events, final exams had just been completed on campus, as the HVO building at the summit of Kilauea was beginning to crack. With school finished, the Geology Department had several empty classrooms, labs and offices available, which HVO staff were happy to move into temporarily, so that they could continue monitoring the volcano without a pause.

Lava samples were analyzed in the Geology Lab as each fissure opened up.

Towards the end of summer, CSAV International scientists were allowed to visit the eruption in Puna, to learn how the USGS monitors volcanic activity using drones.

Angie showed the CSAV group how drones collect images and data of the lava flows.

As Kilauea Caldera collapsed in response to the magma draining out and erupting in Puna, many cracks appeared in the adjacent ground, including Crater Rim Drive, where the underlying road material was shaken loose.

The large cracks associated with the summit collapse around Halemaumau were obvious. But HVO staff wondered, might there be smaller cracks, just outside of Kilauea Caldera, that would indicate possible widening of the caldera, which could threaten adjacent roads and buildings? In forested areas, such cracks would not be visible to drones, helicopters or satellites. Our first mission was to hike the trails, assisted by UH Hilo Geology students, and document these small and concealed cracks.

Cracks developed on the asphalt path near Kilauea Overlook, as underlying fill shook loose into the pre-existing graben.

A sinkhole opened up on the Kilauea Iki Trail, as repeated earthquakes caused the underlying material to drop.

Between Steaming Bluffs and KMC, narrow cracks appeared on the trail, parallel to the caldera wall.

Downwind of Halemaumau, large cracks opened up, and the area was coated by layers of fine gray ash produced during the earthquakes.

Here, the team only did work following a heavy rain, so that the ash would be moist, and unable to become an airborne hazard; boot print shows ash thickness.

In contrast, very little ash fell upwind of Halemaumau, so that the deformation of Crater Rim Drive near Keanakakoi could be seen in detail.

After the initial documentation of cracks was underway, the next step was to take careful measurements, to see if any cracks were enlarging; here, a kinematic GPS instrument is precisely centered over a benchmark near Keanakakoi.

Steel tape measurements were made at select locations, between Jaggar Museum and the highway, where micro cracks were abundant.

The distance between two points is recorded, then compared with future measurements to see if the cracks are widening.

The kinematic GPS survey was useful, because baseline data already existed, and thus areas of movement could be pinpointed.

Side by side photos showing a grassy area at Richardson's Beach Park at low tide and King Tide.
A boy is surfing on the grass during the King tide.

Luckily for Hilo, the King Tide of May 2017 did not coincide with high surf in Keaukaha. The side-by-side images above show the difference in low and King tide at Richardson's Beach Park, where brackish fish ponds are just inland of the ocean. If a King tide occurs during conditions of high surf, tropical storm, tsunami, or hurricane, the impacts of these natural disasters will be amplified. Be ready for all natural disasters by planning ahead, and avoiding the areas of impact. Stay safe!

Visit our CSAV channel on YouTube for dozens of outstanding mini videos! 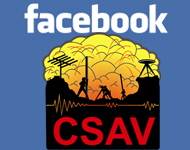 Back to the CSAV home page for details about our volcano programs!

← University of Hawaiʻi at Hilo