CSAV's cooperative research program enables us to work with and provide specialized support to the US Geological Survey's Hawaiian Volcano Observatory, and includes seismologic, geodetic, and geochemical monitoring and analysis. This program, established in 1998 through Senator Daniel Inouye, helps HVO to better fulfill its mission to monitor Hawaiʻi's volcanoes and to manage their potential hazards. The program also helps CSAV in its mission to provide state-of-the-art training in volcano hazards monitoring and to improve public awareness of volcano hazards in Hawaiʻi. And UH Hilo Geology majors get valuable experience assisting HVO scientists in research projects. Here are some examples, both past and present, of work done under the Coop Grant. 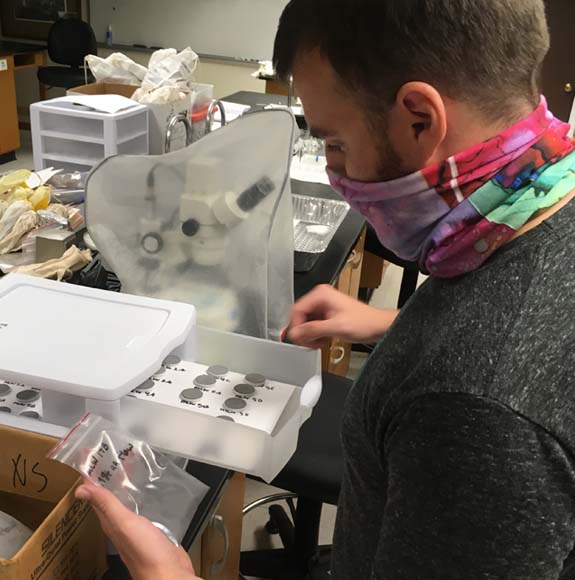 UH Hilo Geology major Will Wooten double-checks pellets made of pulverized rock samples, ready for analysis in the EDXRF.

CSAV’s student internship program allows UH Hilo majors in Geology and Computer Science the opportunity to work at HVO on research projects. Stephanie Dinkins, who has a BS degree in Geology and is working towards a degree in Computer Science, spent the summer of 2008 under the guidance of HVO geophysicists Dave Wilson and Paul Okubo. One project added new functionality to several multi-threaded Earthworm programs (a real-time seismic processing system), including the ability to collect and output statistical information. Dinkins wrote scripts to process and store large data sets. This script parsed both text and streaming Earthworm data that could be compared and then stored in a MySQL database. One such script automated the process of parsing historical data that had been stored on many external hard drives, so that it could be relocated to a master database. Centralizing the storage of the data makes it more readily available for comparison and analysis by HVO scientists. Another project involved system Administration. Dinkins assisted in the installation and configuration of Big Brother network monitoring software for computers running Windows and Linux operating systems within the same network. The network monitoring software aids in identifying real-time network issues for attention and repair. 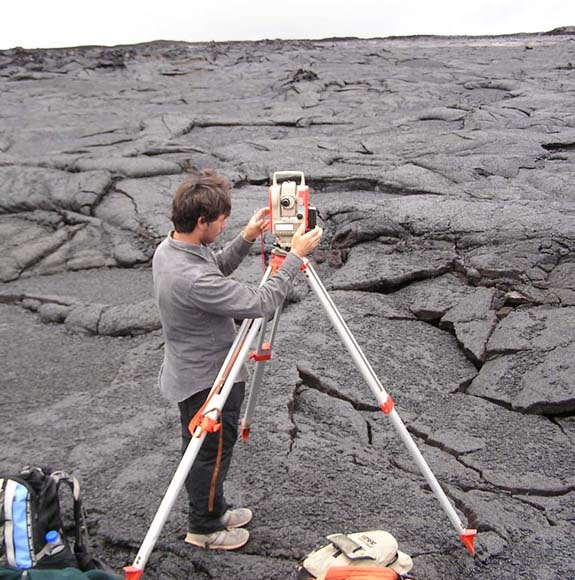 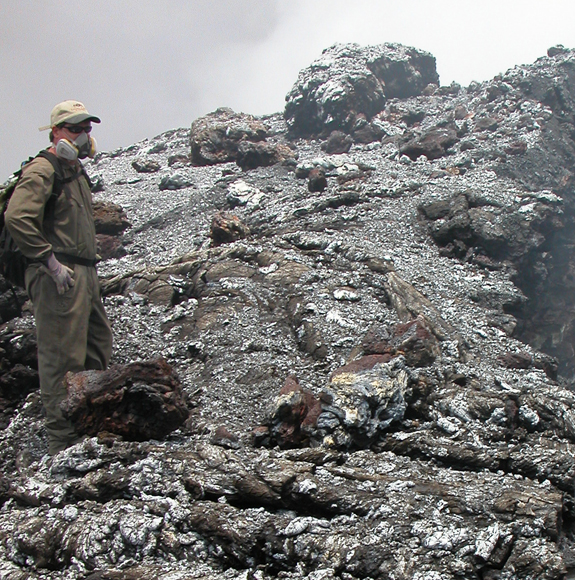 In 2004, Sean O’Neill led a precise survey of Mokuaweoweo. For this mapping project, the elevations across nearly the entire caldera were determined using a Total Field Station. In the event of a future summit eruption, this detailed information will be invaluable in calculating the volume of new flows within the caldera.

Find out how to apply for this internship. 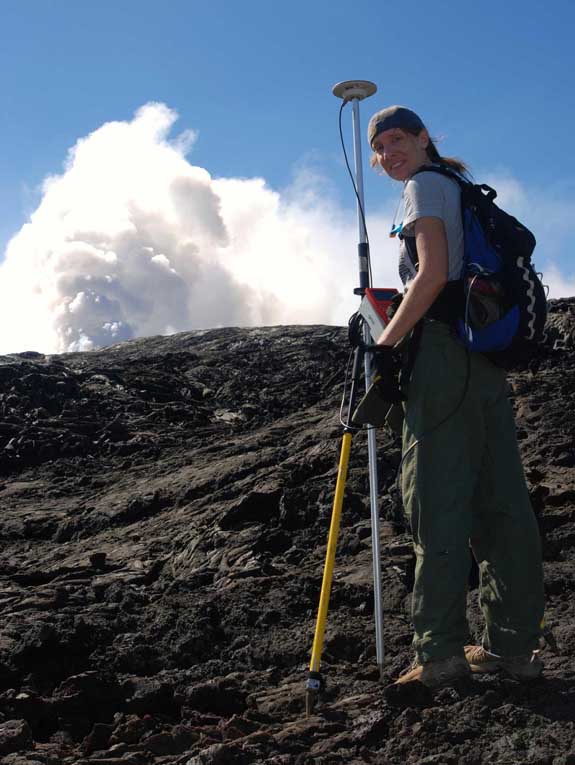 In 2001, Ralf Krug developed an integrated data management platform that was the predecessor of VALVE, an innovative archival and real-time database that allows HVO staff to compare seismic amplitude, tilt, and gas emissions on a common time base. Past data can be easily retrieved.

This computer network requires dedicated administration, which for years was provided by Loren Antolik. He designed programs that automatically ingest new HVO data sets, and he created routines for plotting the data to allow interactive visualization through VALVE. Antolik also assisted in data collection and the maintenance and installation of continuously recording instruments.

Ingrid Johanson worked under the Coop as a post-doc, and then eventually was hired by the USGS Hawaiian Volcano Observatory. She assists with new ways to review INSAR data. She designed a computer system whereby images can be viewed as a time series, allowing scientists to analyze how Hawaiian volcanoes are deforming.

Two decades ago, UH Hilo graduate Jason Meyer installed broadband seismometers inside Kilauea's summit caldera, allowing scientists to collect detailed information over a much larger range of bandwidth than is provided by standard seismometers. In 2020, Kass Ulmer joined the Coop team as a seismic analyst, and by this time, the 2018 caldera collapse had occurred. This collapse left sections of Crater Rim Drive severely damaged. To monitor future events in the area, new seismometers are being installed in strategic locations, to protect health and safety.

Jason Meyer installs a seismic station on Kilauea, in 2003, on the floor of Kilauea Caldera. 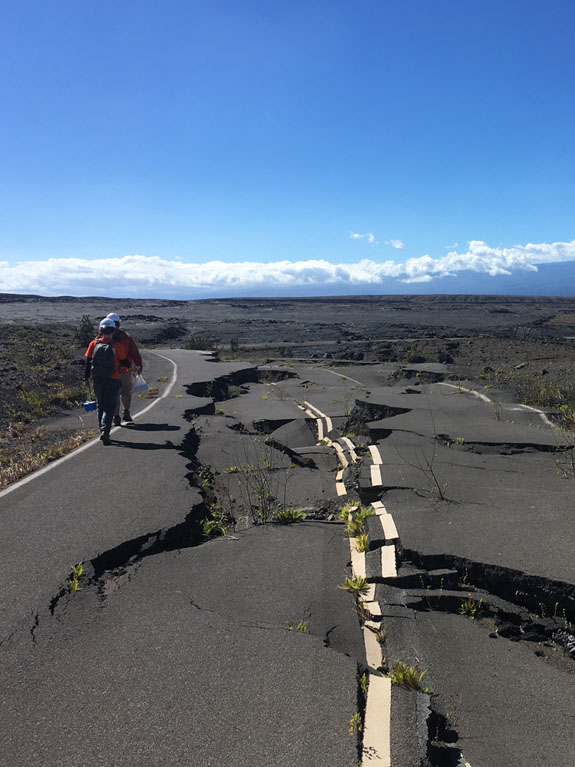 Kass Ulmer, seismic analyst, hikes out with the HVO team to install a seismometer. This section of Crater Rim Drive was heavily damaged during the 2018 caldera collapse. Photo courtesy HVO.

The Cooperative Research program partial support for research involving volcanology and social science in order to understand 1) the societal factors that influence risk from volcanic hazards in Hawaiʻi and 2) public attitudes toward the mitigation of lava flows with controversial and politically sensitive measures such as earthen barriers. University of Hawaiʻi at Mānoa graduate student Chris Gregg analyzed previously lost and forgotten survey data collected during the 1960 eruption of Kilauea volcano in Kapoho in order to understand public attitudes toward lava flow hazard mitigation strategies. Gregg also conducted a study of public perceptions regarding the hazards posed by future eruptions of Mauna Loa. This effort involved a detailed sequence of surveys conducted on the island both before and after dissemination of volcano hazards information on the island. This work formed a portion of Gregg’s Ph.D. dissertation.

CSAV has supported the gas geochemistry group in the ongoing development of a new generation of miniaturized correlation spectrometers that have replaced the now-obsolete Barringer Research COSPEC. CSAV provided equipment and supplies for fabrication of calibration cells for the new instruments, developed by SOEST colleagues Drs. Keith Horton and Harold Garbiel, and CSAV staff developed a simplified process for filling the calibration cells that substantially reduced the cost of building a complete system. The Coop program has also contributed major equipment to the Hawaiian Volcano Observatory's geochemical monitoring program: an OP-FTIR (Open-Path Fourier Transform Infrared Spectroscopy), used to analyze the composition of volcanic gas in the field.

Read more about the OP-FTIR.

Miki Warren, UH Hilo Geology graduate, was hired under the Coop to assist the HVO Gas Geochemistry team beginning in 2019. Miki had spent years as a volunteer for HVO, while simultaneously earning her college degree. She also had volunteered with UH Hilo Professor Ryan Perroy's drone research (collecting aerial video of the 2018 Puna lava flows), and assisting Professor Steve Lundblad in documenting cracks around Kilauea Caldera following the 2018 collapse. This wealth of experience made Miki a prime candidate for the Coop job. What was it like for Miki, to be on the front line, monitoring a new eruption at Halemaumau that appeared with very few precursors, on the night of 20 December 2021? Miki explains, "I got a call from Tamar at 10:30 pm Sunday night. I was on standby until I got the official word about half an hour later to head to the USGS-HVO warehouse in Kea’au and pick up the gas team’s FTIR (Fourier-transform infrared spectrometer) to bring to the summit. I went out with the gas team that night and collected geochemical spectral data using the light emitted from the new lava fountain in Halema’uma’u. The next morning I came home and slept for two hours, grabbed new sulfur dioxide sensors, and headed back to meet the other gas gals for another full day of volcanic gas measurements." 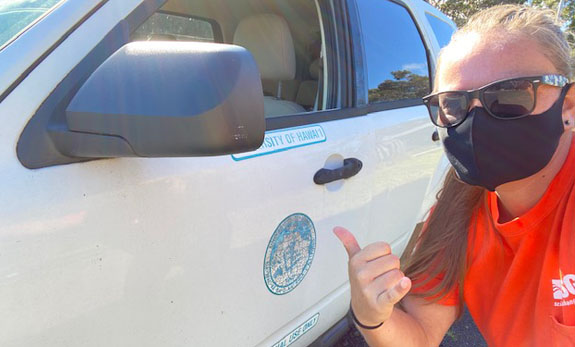 Miki Warren uses a research vehicle, with a COSPEC attached, to drive beneath the volcanic plume and determine gas composition. 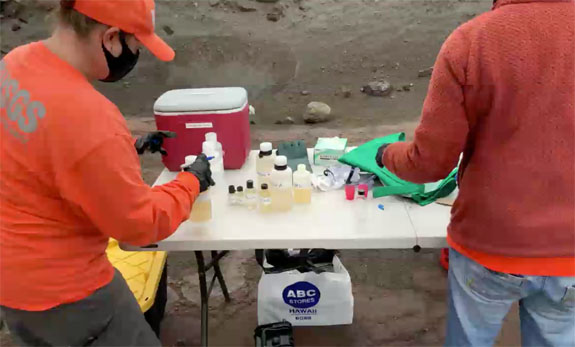 Back when Halaemaumau had a water lake, scientists collected samples of the water for analysis; here, Miki assists in carefully labeling each sample. 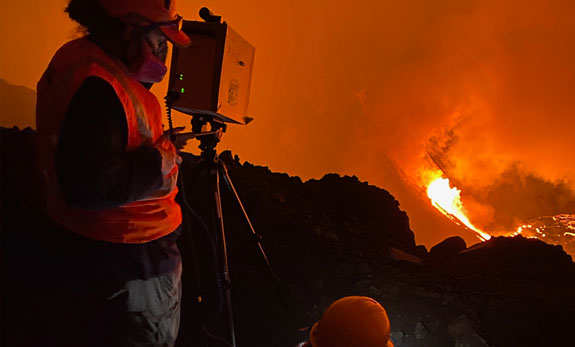 The Cooperative Research grant allows geologists to assist researchers at HVO. Past assistants have monitored the eruption of Kilauea and maintained the GIS data base, and developed lava flow risk maps for Mauna Loa. Current projects range from monitoring eruptions, to analyzing tephra and lava samples in the UH Hilo Geology Lab. Read details about geology projects!

Katie Mulliken works at HVO under the Coop Grant as a geologist. She assists HVO with field work. Katie Mulliken and Liliana Desmither work as a team in keeping the public and officials informed about current volcanic activity. 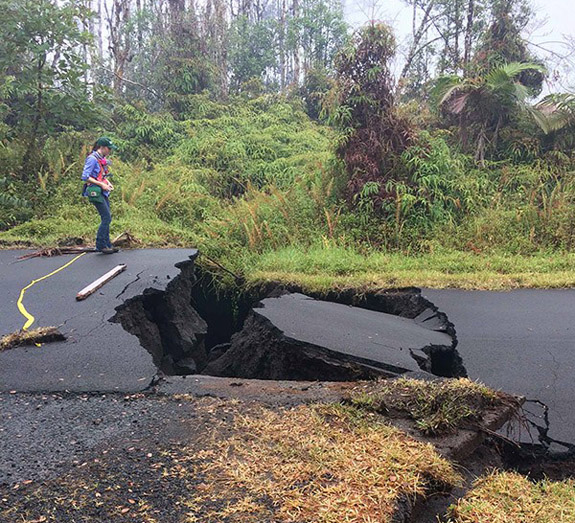 Katie Mulliken documents cracks in the road at Leilani Estates in 2018. 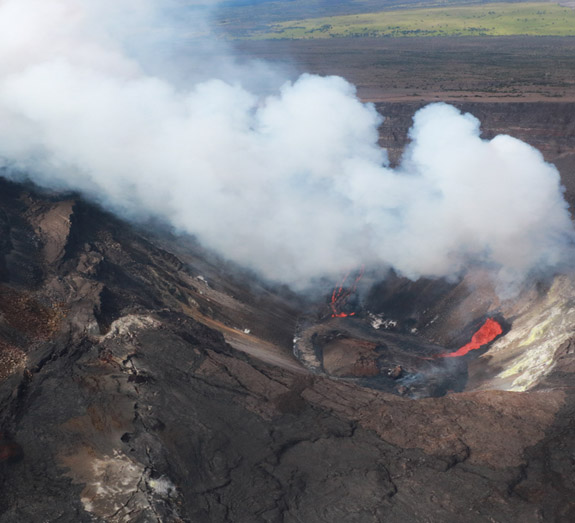 This photo by Katie Mulliken, courtesy HVO, shows the eruption of Halemaumau that began in December 2020. 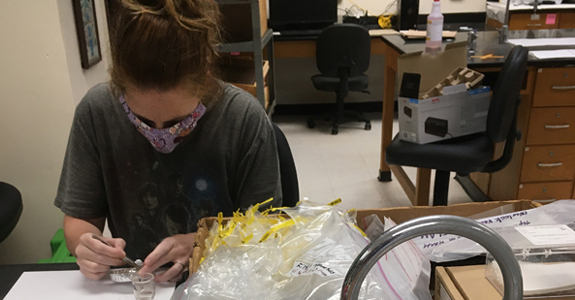 Post-doc Julie Chang picks roots out of a volcanic ash sample prior to analysis. 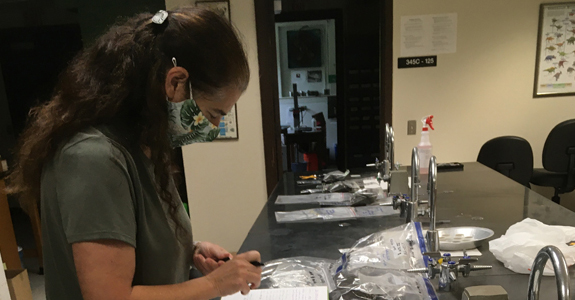 Cheryl Gansecki sorts through zip-loc bags of tephra samples collected from the eruption of Halemaumu. 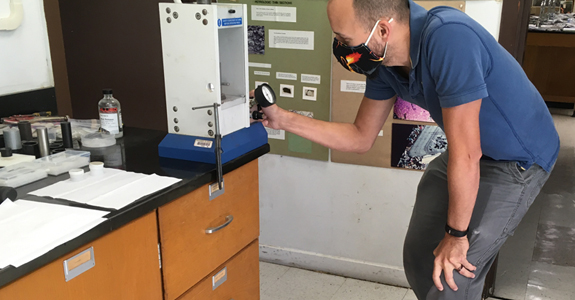 Student assistant David Quinones carefully adjusts an instrument used to turn pulverized rock into pellets for analysis by the EDXRF.

Although the Coop Program's primary focus is on research, a percentage of the funding is used for educating the public about the hazards resulting from volcanic eruptions. As the HVO web site states:

“The best defense against any natural hazard is education. Residents and public officials should be aware of the hazards in a given area so that they can make rational decisions regarding where to build homes, develop property for commercial use, and locate public facilities. A well-informed public will neither overreact to the hazards nor ignore them.”