Katia adjacent to a river of lava during the 1984 eruption. Photo: Maurice Krafft.

"Pele Dancing" was captured by Katia Krafft while she was photographing the lava streams flowing down Mauna Loa Volcano during its 1984 eruption. Pele is the Hawaiian Goddess of Volcanoes, and this dramatic photograph shows Pele exulting in her awesome volcanic power.

How to order the poster

To obtain an 18 X 24 inch (46 X 61 cm) poster of Pele Dancing, please send a donation of $25 to the Maurice and Katia Krafft Memorial Fund at the address below. The poster will be airmailed to you in a sturdy mailing tube. Larger donations are most welcome; the fund has already received individual pledges in amounts up to $600. If you are making a larger contribution, please indicate the number of posters you would like to receive.

You may send donations to:

Please include your name and complete address with your donation, and indicate whether you would like a receipt for tax purposes. 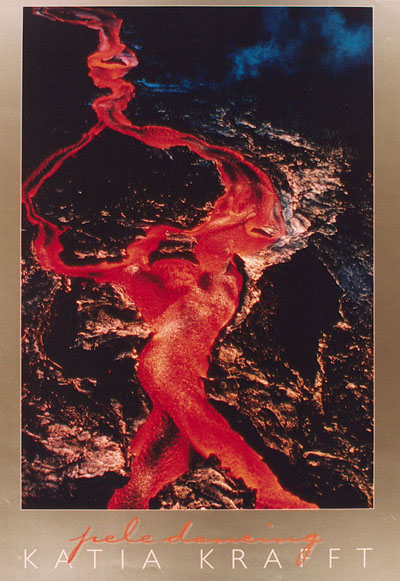 Maurice and Katia Krafft studied and photographed erupting volcanoes all over the world, witnessing and documenting more active volcanoes than any other investigators. Their popular books, lectures, and videotapes -- all done in their exuberant style -- greatly increased public awareness of the nature and dangers of volcanic eruptions. Ironically, they were killed by a hot ash flow while photographing an eruption in Japan in 1991. The French Conservatoire Régional de l'Image provides details about the Kraffts, and showcases an extensive collection of their photographs and videos.

A recurring theme in much of the Kraffts' work was the importance of educating people in countries of high volcanic risk about the hazards that potentially active volcanoes pose. Shortly before their deaths the Kraffts completed a videotape called "Understanding Volcanic Hazards" that has been translated into many languages for just such use. The goal of reducing volcanic risk was also the motivation for establishing the Center for the Study of Active Volcanoes (CSAV).

The Maurice and Katia Krafft Memorial Fund has been established to help foreign students who need financial assistance to attend the CSAV training courses. Profits from the Pele Dancing poster go to the fund, and any extra donations to the fund will be fully used to support foreign students at CSAV.

Beginning in 1997, The Krafft Memorial Fund has enabled dozens of scientists to attend the CSAV International Training Program in Volcano Hazards Monitoring. Funds have been used to provide airfare, housing, and/or course fees for scientists from a variety of countries, in certain cases where the home observatory or institution was not able to provide assistance. The US Geological Survey's Volcano Disaster Assistance Program (VDAP) also contributes generously to funding participants from select countries. Pictured below are scientists who have been able to attend the CSAV International Course thanks to assistance from the Krafft Fund. Your continued support of this fund will allow future scientists to attend, as well!