During his tenure as Scientist-in-Charge at the U.S. Geological Survey’s Hawaiian Volcano Observatory (HVO), Dr. Robert Decker became aware of the urgent need for an ongoing program of training in modern techniques of volcano hazards monitoring for staff and scientists from volcano observatories in developing nations. In response to the many requests that he received for training at HVO, Decker undertook a pilot program in which HVO and University of Hawaiʻi scientists provided field and laboratory training in state-of-the-art technology for monitoring active volcanic systems. The success of this early effort inspired Decker to formally propose that the State of Hawaiʻi establish a Center for the Study of Active Volcanoes as a cooperative effort among the Hawaiian Volcano Observatory, the Hawaiʻi Institute of Geophysics and Planetology, and the Department of Geology at the University of Hawaiʻi at Hilo.

In 1990 he wrote, “Research on how volcanoes work and how to monitor their changing habits has made some major advances during the past 30 years…. Now it is time to apply that knowledge toward reducing the risk from volcanic activity in other parts of the world.” Decker cited the eruption of Nevado del Ruiz, that killed more than 20,000 residents of Armero City, noting that the citizens there could have been saved with “better education, better monitoring, and improved communications,” the goals of CSAV. Upon establishment of CSAV at UH Hilo, Chancellor Kormondy noted, “This is a unique opportunity for the University and the USGS to work collaboratively on a program aimed both to help third-world developing countries as well as provide opportunities for undergraduate students.” 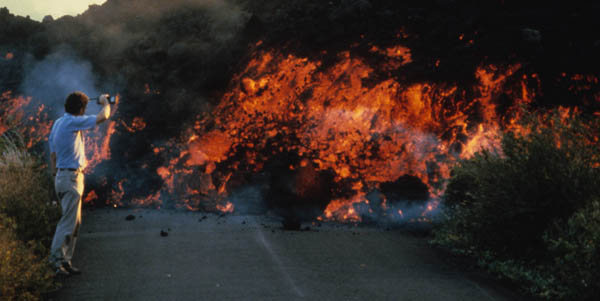 The cooperative training program was initiated in 1989 and, after CSAV-trained scientists from Papua New Guinea and the Philippines participated in monitoring and evacuation during eruptions at Rabaul and Mount Pinatubo, Decker wrote, “CSAV has gained international recognition in the field of volcanological education…CSAV is a joint effort of UH Hilo, UH Mānoa, and the U.S. Geological Survey’s Hawaiian Volcano Observatory. It has brought these institutions closer together and fostered mutual respect and cooperation. It is an old saying, but the whole impact of these groups working together has definitely been greater than the sum of their individual contributions.”

Decker served as a Distinguished Visiting Professor of Volcanology and Chair of CSAV’s Board of Advisors for CSAV’s first decade, and provided leadership and guidance throughout his affiliation with the program. Working with the CSAV faculty, he developed a variety of volcano-related public symposia and programs for both the general public and Hawaiʻi’s primary and secondary school teachers. These outreach efforts now include web pages, hazards-related video production, and school visits. CSAV currently receives research grants used to provide equipment and personnel for HVO monitoring programs, hazards-related public outreach, and internship opportunities for UH Hilo students.

By now, CSAV has trained over 200 scientists and technicians from 31 countries with support from the U.S. Geological Survey’s Volcano Disaster Assistance Program and a Cooperative Research and Training Agreement that has been established with the Hawaiian Volcano Observatory.

In recognition of Dr. Decker’s many fundamental contributions to the Center, CSAV has established an endowed training program in his honor with the University of Hawaiʻi Foundation. The endowment will provide funding for scientists from developing countries with active volcanoes to attend CSAV International programs. For information on contributing to the Robert Decker Memorial Endowment, please contact Darcy Bevens at her email address: bevens@hawaii.edu or write to us at:

Make a Gift to the Robert Decker Memorial Endowment!

Above: Elizabeth Gaunt (Ecuador) enjoys field work during the CSAV International Course in 2017. Liz was able to attend the course because with help from the Decker Fund; she explains:

"Volcanic hazards are a big problem in Ecuador and in Latin America in general, so courses like CSAV are an invaluable resource to enable scientists to gain a comprehensive understanding of monitoring and volcanic hazards. However, funding is often very difficult to come by. I am extremely grateful to the Decker fund for providing a means for me to attend; without this funding I would not have been able to attend the course or learn from some of the best scientists in the world and take back a wealth of knowledge that will help with future volcanic crises and keeping people safe from the active volcanoes that they live with day to day."

In 1993, a photographer named Fred Rackle wrote to Bob Decker, offering him the astonishing footage of the 1959 & 1960 eruptions, Kilauea Iki and Kapoho, respectively. Read details about this exchange, and watch Rackle's videos, now on YouTube!

← Center for the Study of Active Volcanoes