Maunakea holds major spiritual significance to Native Hawaiians. Rock pilings which appear natural may be man-made markers or cultural altars and are protected by law. During your visit, please demonstrate respect and leave the mountain as you found it. Do not leave items behind, or move or remove anything.

In addition to the cultural resources, Maunakea is home to unique species and habitats, and contains the world’s most sophisticated collection of astronomical facilities. Use only marked trails and roads and be mindful of your impacts on the sensitive natural and scientific resources.

Maunakea: Though simply translated as “White Mountain” since at least 1823, the name Maunakea is also known in native traditions and prayers as Mauna a Wākea (Kea), “The Mountain of Wākea.” It is the first-born mountain son of Wākea and Papa, who were also progenitors of the Hawaiian race. Maunakea is symbolic of the piko (umbilical cord) of the island-child, Hawaiʻi, and that which connects the land to the heavens. (Kepa Maly and Onaona Maly. 2005. Mauna Kea-Ka Piko Kaulana o Ka ʻĀina, Mauna Kea - The Famous Summit of the Land).

Maunakea or Mauna Kea? The University of Hawaiʻi at Hilo College of Hawaiian Language, Ka Haka ʻUla o Keʻelikōlani, recommends one word, "Maunakea" as the proper Hawaiian usage. Ka Wai Ola (Vol. 25 No. 11) also identifies "Maunakea" as the traditional Hawaiian spelling. Maunakea is a proper noun—the name of the mountain on the Island of Hawaiʻi. This spelling is found in original Hawaiian language newspapers dating back to the late 1800s when the Hawaiian language was the medium of communication. "Mauna Kea" spelled as two words really refers to any white mountain — it is a common noun (vs. the proper noun). The “Mauna Kea” spelling is only used in this document where "Mauna Kea" is used in published or legal documents, such as the “Mauna Kea Science Reserve.” Civil Beat has a nice article on the topic.

The Deities of Maunakea 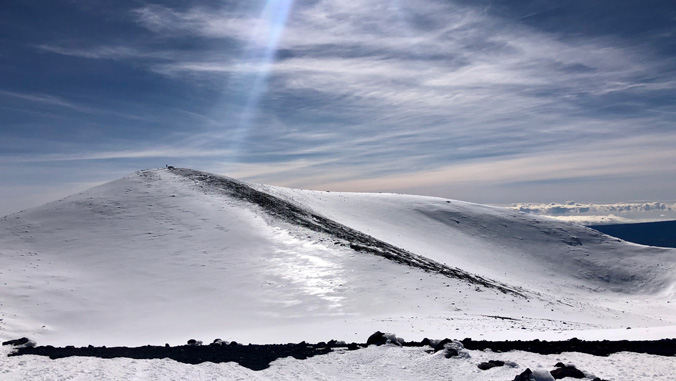 Poliʻahu, covered in a mantle of snow and ice, is the snow goddess of Maunakea. Poliʻahu's rival, Pele, goddess of volcanoes, stays restlessly away on Mauna Loa. Read more about Deities of Maunakea and Hawaiian Mythology .

Cultural and Historical Sites on Maunakea

The cultural significance of Maunakea is evident in its historic properties, which include traditional cultural properties, archaeological sites, trail systems, and buildings. The summit region of Maunakea is considered a traditional cultural property. Numerous archeological sites, including an adze quarry, shrines, burials, ahu, lele, and other features are significant in Hawaiian culture. Please respect the sites and do not alter them, bearing in mind that some of these may take the form of rock stackings or other formations that can in some cases appear natural.

Maly and Maly (2005:454) assert that ancient trail systems across all the mountain lands afforded travel to burial sites and for the collection of resources including adze stone, canoe koa, and bird feathers.

In the 1930s, the first stone cabins on Maunakea were built by the Civilian Conservation Corps (CCC). The cabins served as a base camp for hunters, hikers, and explorers. The name of the mid-elevation area, Halepōhaku, or “house of stone”, is derived from these cabins. An architectural survey completed in 2010 provides additional detail on these buildings: Halepōhaku Rest House 1, Halepōhaku Rest House 2, Halepōhaku Comfort Station.

Further Reading about the cultural and historical significance of Maunakea

Additional information on the cultural resources of Maunakea is presented in the detailed video "A Sacred Summit."