Geology Department in the phone directory

is a member of College of Natural and Health Sciences (CNHS) 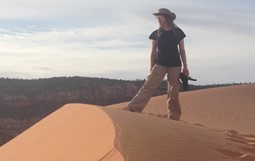 Jene Michaud, Hydrology, explains why she chose Geology: "As a teenager, I was interested in becoming a veterinarian, an engineer, or a scientist. I was fortunate that my father was both an engineer and a scientist so I was encouraged in that direction. I started college as a civil engineering major, but at the end of my sophomore year I took a geology course. I was hooked. While sitting on an outcrop during sophomore field camp, I decided to change my major. What I like about geology is that it combines nature, outdoors, and hard science. It is intellectually satisfying and I never stop learning. Unfortunately, I graduated from my undergraduate program just as the petroleum industry was downsizing. That is why I broadened my career options by studying hydrology during graduate school. Geology is a very diverse field and you never know where you will end up. In my case, I ended up on a young basaltic volcano that soaks up huge amounts of rain." 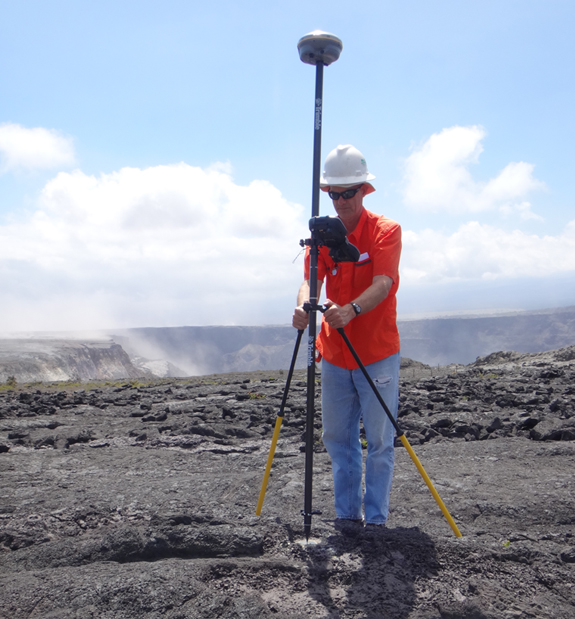 Steve Lundblad, Volcano Geodesy, talks about his background: "Growing up in Washington state, I enjoyed hiking and camping around the Cascade volcanoes. I became interested in geology, in retrospect, after witnessing first-hand the eruption of Mount St. Helens during high school. My hometown was blanketed by over an inch of ash and we spent a great deal of time learning about the volcano and cleaning up after it! When I went to college in New England, I thought about becoming a physician or a chemist. But as soon as I took a seminar on glacial geology, with many cool field trips, and an introductory class as a general education requirement, I was hooked on geology. It was a perfect match of my interest in the outdoors and studying the processes involved in shaping it. Getting outside and exploring is one of my favorite things to do.

"Consequently, I take my classes out in the field as often as possible. Some trips are just show-and-tell, but most field work includes authentic learning experiences about how to observe, how to measure changes, and how to map geologic features. Geology majors at UH Hilo obtain great experience as research assistants; they joined me in deformation measurement during the 2018 Kilauea eruption in lower Puna, where we obtained detailed data about the movement of the underground magma system along the Lower East Rift Zone. The students and I are currently learning about fault movement associated with the 2018 Kilauea caldera collapse and its impact for several miles around the summit. All of the geology majors are invited to join in these field research activities, so everyone can get some experience and learn about our fascinating volcanoes.

"Back in the Lab at UH Hilo, I help manage the geoarchaeology lab, where we analyze rocks using an EDXRF instrument to determine their precise chemical composition. In collaboration with Dr. Peter Mills (UH Hilo anthropology department), we work to determine the source pre-contact Hawaiian stone tool artifacts and how they were exchanged in the islands. Geology and anthropology majors gain experience with the instrument and have the opportunity to work on individual research projects. In collaboration with the USGS Hawaiian Volcano Observatory, we use the EDXRF to examine the products of eruptions such as occurred in 2018. From these analyses, we can help determine details about the underground magma storage system--did the lava flow come from fresh magma, or from a stored pod of older lava that was left behind by an earlier eruption? From these projects our students get valuable research experience that helps them in graduate school or employment after graduation." 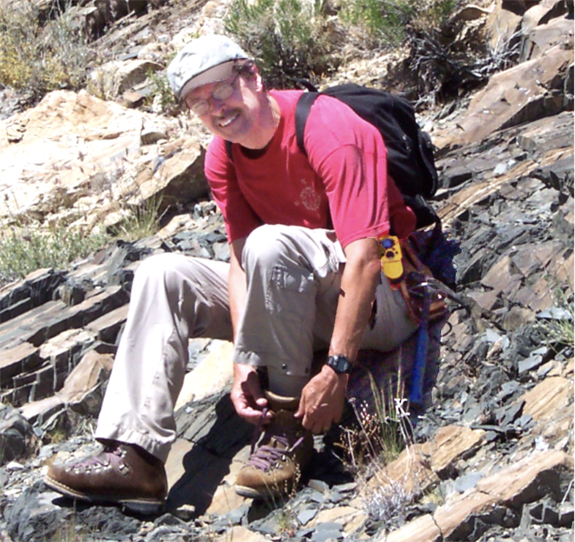 Jim Anderson, Flood Basalt Volcanism, describes how his interest in geology began: "Most people get hooked on geology after they enter college, and that was true for me too. I took a course in geography where the focus was on the processes that have shaped the surface of the Earth. At first, I didn’t realize this was rooted in geology, a subject that I had not encountered previous to college. (They didn’t teach Earth and Space Science in intermediate school back then.) I was very surprised at how well I did in that class without even trying that hard. I soon realized this was because I loved the subject, and quickly changed my major to geology.

"So why did I love this subject? I suspect it was the imprint of all the time I spent in the mountains during childhood. This included camping, hiking, fishing, rock climbing, and general childhood fun and frolic, in some incredibly beautiful places in the Pacific Northwest and Canada. A life-long love of the outdoors resulted from those experiences and explains, in large part, why I love doing geological field research. There have been many times, during my career, when I have paused in a breathtakingly beautiful setting and thought, “Wow, I can hardly believe that I am actually being paid to be here.” My career has taken me to four of the seven continents of the world including, notably, field research projects on Mount Vesuvius, Italy and in the Zagros Mountains of Iran. So, if you like to travel, this is the field for you.

"Apart from teaching, my favorite job was doing two years of full-time regional mapping with the U.S. Geological Survey. This led to being admitted to doctoral studies at the University of Southern California and, ultimately, to a faculty appointment at UH Hilo. Over the years since then, research projects have included structural mapping of part of the Santa Monica Mountains, California, geodetic studies in Kilauea’s lower east rift zone, and geological mapping of the eastern part of the Columbia River Gorge National Scenic area, Washington and Oregon." 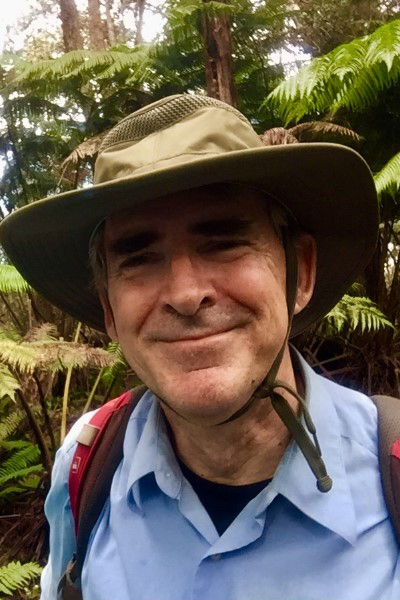 Rick Hazlett was working as a Ranger for Hawaii Volcanoes National Park in 1974 when the fissure eruption that flowed into Keanakakoi Crater broke out, allowing him to see activity first-hand. One of his colleagues suggested he pursue a Ph.D, and that began Rick's careeer as a geologist. Rick was a professor at Pomona College for decades, and is Emeritus Professor of Environmental Analysis there.

When he retired, Rick moved back to the Big Island, and volunteered with the USGS Hawaiian Volcano Observatory. At HVO, Rick enjoyed research projects collaborating with Tim Orr in studying the SW Rift Zone, and was invaluable during the 2018 eruption in Puna, as an observer on the HVO team. He enjoys working with UH Hilo students on geology projects.

He is busy revising new additions of several books, including 'Roadside Geology of Hawaii' and 'Volcanoes, Global Perspectives' and is the Senior Editor of the (2020) Oxford University Press Research Encyclopedia of Agriculture and the Environment. Rick explains, What got me interested in geology was a passion to grasp, somehow, the Big Picture when I was growing up. This is encapsulated in the quote, from a song by Rush: "Living in the pools we soon forget about the sea." 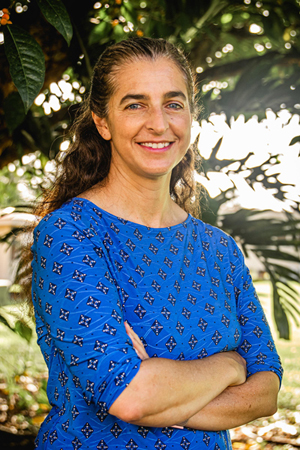 She has produced numerous videos - and a card game - about volcanoes, and volunteers with the Hawaiian Volcano Observatory to monitor Hawaii’s active volcanoes.

“I’ve been fascinated by volcanoes since I was a kid, but two opportunities really cemented that: a grant to do undergraduate research on a volcano in Greece and a summer internship with the Hawaiian Volcano Observatory. This inspired me to try and make opportunities for our majors to be involved in research projects, gain real-world lab, field, and computer skills, and to make connections with outside researchers. I’ve also discovered that I really enjoy teaching at all levels, and have gotten to know some fantastic UH Hilo students over the years.”

During the 2018 eruption of Kilauea in lower Puna, Cheryl was instrumental in assisting the Hawaiian Volcano Observatory. Her decades of prior experience as a volcano videographer, producing videos that explained the science behind the eruptions, meant that she was an ideal observer. Since HVO was extremely short-handed during the 2018 eruption, in which monitoring was done 24/7, Cheryl's contributions were significant. Perhaps more importantly, as a petrologist, Cheryl was interested in the evolving chemistry of the eruption, since the lava impacted homes and infrastructure. She began systematically collecting samples of fresh lava, and analyzing these through the EDXRF. This meant hiring UH Hilo Geology majors to prepare the samples, in order to have a rapid turnaround. The students gained research experience in the Lab, and Cheryl's analyses proved extremely important. She and her team recognized that the initial viscous lava, which flowed slowly, was trending towards more fluid fresh lava, which would quickly overrun a huge swath of homes and infrastructure. These observations allowed Civil Defense to evacuate residents safely, well in advance of the molten lava. An article about Cheryl's research was published in Science.

Cheryl notes, "We are always looking for new Geology majors at UH Hilo. Although the 2018 eruption is over, we are still processing data, and we need students to help out on projects, both field and lab, for research on old lava as well as new eruptions." 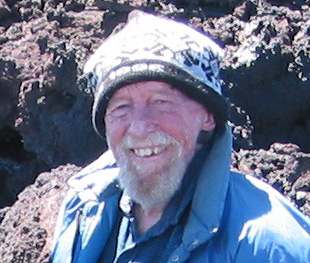 Jack Lockwood grew up in Connecticut, but when his family moved to Southern California, he was hooked on geology and rocks, especially in the desert. Jack attended the University of California and earned a Ph.D. from Princeton, with his dissertation about northern Colombia. Early work included a post-doc with Russian volcanoes (Kamchatka).

He has spent most of his career with the USGS, first in mapping the Sierra Nevada, and then at the Hawaiian Volcano Observatory. At HVO, he spent much of his time working on Mauna Loa. Jack has a special interest, not just in the science of volcanoes, but in keeping populations safe from eruption hazards.

Now that he is retired, he enjoys writing, including the book he authored with Rick Hazlett, "Volcanoes--Global Perspectives." Jack now looks forward to mentoring Geology majors at UH Hilo.

Darcy Bevens has been working at UH Hilo for three decades. The best part of her job?

"Working with students, finding research opportunities for them, and then watching them succeed in grad school and careers!" 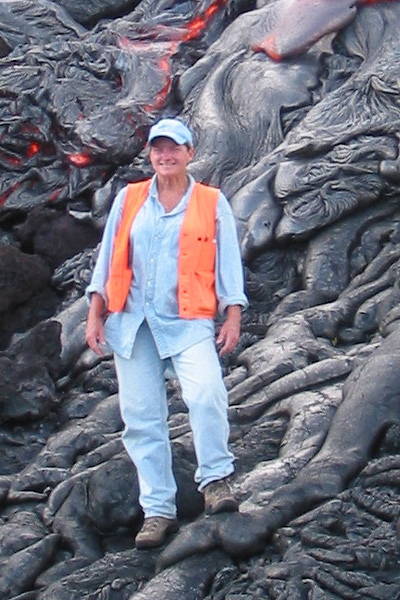