“Campus Security Authority (CSA)” is a Clery Act-specific term that encompasses four groups of individuals and organizations associated with an institution. An official is defined as any person who has the authority and the duty to take action or respond to particular issues on behalf of the institution.1

Because official responsibilities and job titles vary significantly on campuses, the law does not state a list of specific job titles. To determine specifically which individuals or organizations are campus security authorities for your institution, consider the function of that individual or office. Look for officials (i.e., not support staff) whose functions involve relationships with students. If someone has significant responsibility for student and campus activities, he or she is a campus security authority. Note that whether or not your institution pays an individual is not a factor in determining whether that individual is a CSA. Be sure to keep your CSA list current so that you do not omit any individual or organization that fits the definition of a CSA.

Institutions are advised to reevaluate the CSA status of all employees (including student employees) on at least an annual basis and document the rationale of the determinations. Please note that, while there may be some overlap, persons considered to be CSAs for Clery Act reporting are not necessarily the same as those defined as “responsible employees” for Title IX.

What Does a Campus Security Authority Do?

The function of a campus security authority is to report those allegations of Clery Act crimes to the official or office designated by the institution to collect crime report information, such as the campus security department or a designated CSA. CSAs are obligated by law to report to the Campus Security Office allegations of Clery Act crimes that are reported to them in their capacity as a CSA. CSAs must report third party allegations only if the reporting party is a reputable source such as an outside counseling agency, doctor, or anyone in a position of similar responsibility.

What Does a Campus Security Authority Not Do?

Exemption for Pastoral and Professional Counselors (Note: UH Hilo has no pastoral counselors)

The pastoral or professional counselor exemption is intended to ensure that these individuals can provide appropriate counseling services without an obligation to report crimes they may learn about. This exemption is intended to protect the counselor-client relationship. However, even the legally recognized privileges acknowledge some exemptions, and there may be situations in which counselors are in fact under a legal obligation to report a crime.

In most cases it is possible for a CSA to fulfill his or her responsibilities while still maintaining victim confidentiality. CSA reports are used by the institution to compile statistics for Clery Act reporting and to help determine if there is a serious or continuing threat to the safety of the campus community that would require an alert (i.e., a timely warning or emergency notification). Those responsibilities can usually be met without disclosing personally identifying information. A CSA report does not need to automatically result in the initiation of a police or disciplinary investigation if the victim does not want to pursue this action. 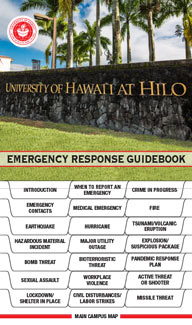 Refer a Student of Concern to the UH Hilo Care Team.

Report a potential crime anonymously via the Silent Witness system.