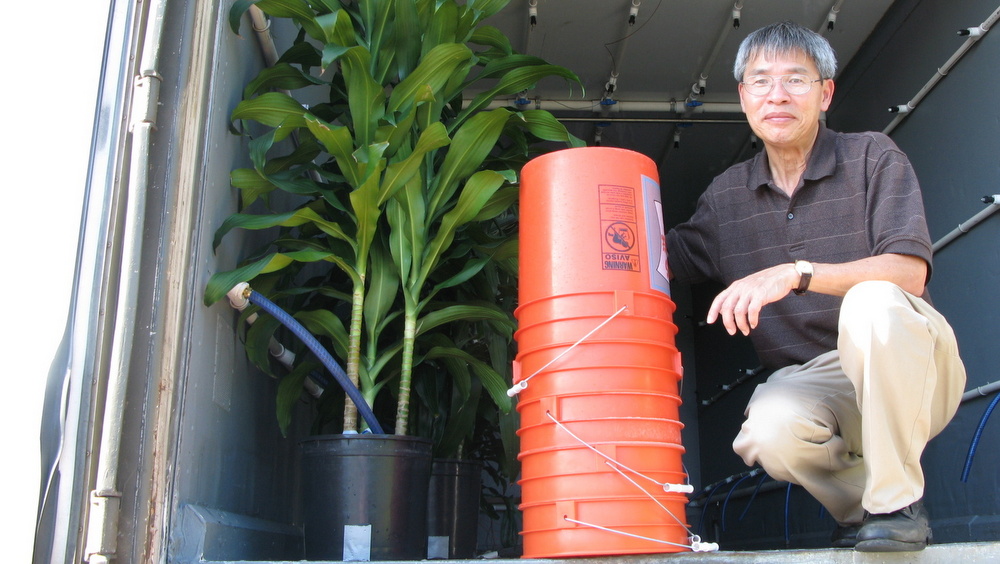 Professor Tsang helped save Hawai‘i export market with innovative, non-chemical pest and pathogen treatments. He was part of a research team that received the 2010 Governor’s Award as State Team of the Year for developing hot water systems for disinfesting exports.

Marcel Tsang is a professor of agricultural engineering and mechanization at the College of Agriculture, Forestry and Natural Resource Management, University of Hawai‘i at Hilo.

“Since joining UH Hilo [in 1985], I have worked on a variety of agricultural products in Hawai‘i,” Tsang says. “These include macadamia nuts, coffee, ginger root, papaya, cut flowers and foliage, potted plants, sweet potatoes and vegetables among others.”

For the last twenty years, Tsang has concentrated his research on heat treatments using hot water or heated air to disinfest agricultural commodities and potting media of insect pests and other pathogens. A large part of the research was devoted to nursery products.

“This work was crucial to find reliable alternative non-chemical disinfestation treatments for our floriculture products due to the phasing out by the EPA of ozone-depleting fumigants commonly used for disinfesting agricultural commodities of quarantine pests,” he explains. “As a result, the industry was in danger of losing access to their export markets.”

Most of this work has been done in collaboration with Arnold Hara, an entomologist at the Department of Plant and Environmental Protection Sciences at UH Mānoa College of Tropical Agriculture and Human Resources. The team developed a hot water dip system for disinfesting cut flowers and foliage of quarantine pests. Later, they also developed a hot water shower system using a Matson container as the treatment chamber to rid potted plants of coqui frogs.

“We were able to develop heat treatments that are lethal to targeted pests with no detrimental effects on the plants,” says Tsang. “Our effective and innovative treatments have been adopted by the local producers and exporters so that Hawai‘i’s growers are able to continue to ship their nursery products inter-island as well as export to markets on the mainland.”

For work on the hot water treatment, the research team received the Governor’s Award in 2010 as State Team of the Year.

The team was selected as the State Team of the Year honoree in the 2010 Governor’s Awards from among 52 exceptional group and individual nominees from the state’s executive branch departments who exemplify the highest caliber of public service and dedication to serving the people of Hawai‘i.

The Quarantine First Responders is led by Dr. Arnold Hara, a CTAHR entomologist, and is comprised of CTAHR’s Kris Aoki, Susan Cabral and Ruth Niino-DuPonte of the Komohana Research Extension Center in Hilo; Jon Katada of the Waiakea Research Station in Hilo; Charles Nelson of CTAHR’s Department of Molecular Biosciences and Bioengineering; and Dr. Marcel Tsang of UH Hilo’s College of Agriculture.

The team has been recognized for their extensive work on the coqui frog. When other agencies were uncertain about how to deal with an amphibian pest, the team organized the Coqui Frog Working Group and prompted each agency to contribute in their respective areas of expertise. The team knew initial control efforts using chemical sprays would only be a temporary solution so they conducted extensive literature searches, documented the frog’s life cycle in Hawai‘i, screened promising chemicals and delivery methods, and studied the frogs in their native habitat while continuing to look for a long term solution. They also developed frog traps and barriers to prevent the spread and establishment of the coqui in Hawai‘i’s certified nurseries.

To meet quarantine security requirements for floriculture crops, the team generated copious amounts of data to determine the thermal tolerance of various quarantine pests. They successfully designed and constructed a hot-water dip treatment that eliminated pests without killing the plant itself. They also discovered that the treatment extended the shelf life of certain flowers and foliages and had the added benefit of preventing geotrophism, which is a bending of flower stems in response to gravity and is problematic for shippers.

The Quarantine First Responders have visited elementary schools to educate children in recognizing the dangers of touching pests such as the stinging nettle caterpillar, little fire ant, and the dangers in handling slugs. They also educate frustrated homeowners who want to rid their property of the coqui, conduct workshops for commercial growers, make scientific presentations to academic colleagues, and have provided information to thousands of Hawai‘i residents through their publications and websites.

Hot water treatment continues to be one of the main weapons against invasive pests into Hawai‘i. Last year, the State Department of Agriculture used the hot water shower system to clean imported Christmas trees from hitchhiking pests.

“My hope is that this system can be incorporated into a sustainable greenhouse system for container grown vegetable crops where a zero-waste practice can be implemented,” he says.

He also would like to refine a hot water system to manage insect pests on the growing vegetable plants in lieu of using chemical spray.

His future research plans are to see an enhanced production during the winter period by extending the daily growing period through a solar assisted grow light system in the greenhouse.

Tsang received his master of science in agricultural engineering and his doctor of philosophy in engineering science from Louisiana State University.