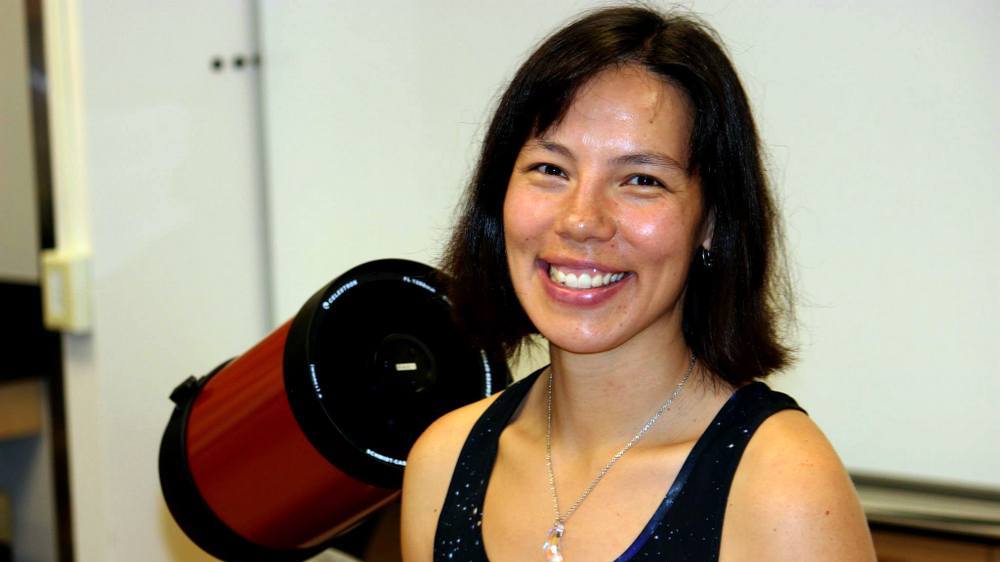 Associate Professor Cooksey is researching the large-scale gaseous structure in the universe. Her area of expertise is the intergalactic medium (IGM), the gas surrounding and between galaxies.

Kathy Cooksey arrived at the University of Hawai‘i at Hilo in early 2014 starting as an assistant professor of astronomy. She researches the large-scale gaseous structure in the universe to understand how various elements cycle in and out of galaxies over cosmic time. Her specific area of expertise is the intergalactic medium (IGM), the gas surrounding and between galaxies.

“As light from bright, distant objects traverse the universe, intervening gas clouds between, around, and in galaxies absorb the light at wavelengths characteristic, albeit redshifted, of the chemical elements in the clouds,” she says. “By identifying and modeling the elements associated with absorption-line systems, we learn about how gas is processed through and dispersed from galaxies.”

A redshift occurs whenever a light source moves away from an observer, an inherent occurrence in astronomical observation. Cooksey and colleagues have conducted the largest surveys for triply ionized carbon at low, intermediate, and high redshift (Cooksey et al. 2010, Cooksey et al. 2013, and Simcoe et al. 2011, respectively).

“This means we study the large-scale gaseous structure and its evolution from today to almost 13 billion years ago,” she explains. “Heavy elements in the large-scale gaseous structure provide top-level constraints on how stars and galaxies formed and evolve and how they are distributed in the universe. We discovered how the triply ionized carbon systems are increasing in number from the past to now. Though we have thousands of systems, they can all be attributed, statistically, to arising in the extended gaseous halos of galaxies.”

Cooksey says her most surprising find is about the gas surrounding galaxies, called the circum-galactic medium or CGM, a relatively new topic in astronomy. There is more and more evidence piling up that this gas is important to how galaxies form and evolve.

“I’m finding it curious what characteristics of the CGM evolve and what do not,” she says. “For example, the size of the CGM traced by triply ionized carbon absorption does not seem to change with time, though galaxies themselves change greatly, in size as well as other properties, over the same time period.”

She says it makes one think there is a “conspiracy” to fix some properties to not evolve though seemingly related properties do evolve.

For her dissertation (she received her doctor of philosophy in astronomy and astrophysics in 2009), Cooksey analyzed archival Hubble Space Telescope (HST) ultraviolet spectra to characterize how the intergalactic medium (IGM) and galaxies relate and how heavy elements like oxygen and carbon are moved from the sites of production in the stars of galaxies to the large-scale gaseous structure (the IGM).

This work led to her becoming a panelist for Hubble Space Telescope proposal reviews, where she served for cycles 19 (2011), 21 (2013), and 22 (2014), on one of two panels broadly classified as extragalactic. “Cycle” refers to each new call for proposals and roughly corresponds to the number of years HST has been operating. The panels do peer review and rank proposals for HST resources.

“Part of understanding (gas) systems is to take better data, which the High Dispersion Spectrograph on Subaru enables us to do,” she says. The Subaru Telescope on Maunakea is owned and operated by the National Astronomical Observatory of Japan.

Robert Ponga, a senior in astronomy and physics at UH Hilo has been working with Cooksey on this project since the beginning of summer 2014. Ponga is looking to characterize the highly enriched gas surrounding distant galaxies. In his project titled, “Analysis of Strong Triply Ionized Carbon Systems in Galaxy Halos,” he is using a suite of software programs to model spectral data from the Sloan Digital Sky Survey (SDSS), looking in particular for heavy-element enrichment of the gas.

Previously, Cooksey had done some observations at Las Campanas Observatory in Chile as a postdoc at MIT, and Ponga analyzed that over the summer as a junior specialist for Xavier Prochaska, an astronomy and astrophysics professor at the University of California at Santa Cruz, under the direct supervision of Cooksey. He’s continuing to analyze the old data as a Hawai‘i/NASA Space Grant Consortium Fellow at UH Hilo and also will incorporate the new Subaru observations.

“His work is confirming preliminary analysis which suggested these strong triply ionized carbon systems trace very heavy-element-enriched gas,” says Cooksey. “This might help solve an outstanding problem in astronomy where we know how many heavy elements there should be, based on star-formation rates, but we couldn’t find it. It seems like it may have been missing (from the data) because it’s in gaseous structure that’s somewhat tricky to observe. But since our group conducted such a large survey of SDSS, we identified thousands of such systems.”

Cooksey also proposed for time at the UH88 telescope to take spectra of low-redshift quasar candidates to see if they are quasars and to measure their redshifts.

“Quasars are the bright, energetic center of galaxies powered by their supermassive holes,” she explains. “Quasars are the background sources we use to detect foreground gas in absorption. Low-redshift quasars, which are closer to us, are rarer than at high redshift, but the low-redshift quasars enable us to probe the large-scale gaseous structure over the last eight-billion years, which is the majority of cosmic time.” For perspective, she notes the universe is 13.7 billion-years old.

The Hubble Space Telescope is the only ultraviolet satellite left with ability to study the low-redshift gaseous structure. Cooksey and her research team are searching for more low-redshift quasars so she can follow up with the HST observations before it dies. The team observed for half a night on Sept. 22 (the other half lost to technical difficulties).

“Without even processing the data, we could see we detected some quasars,” she says.