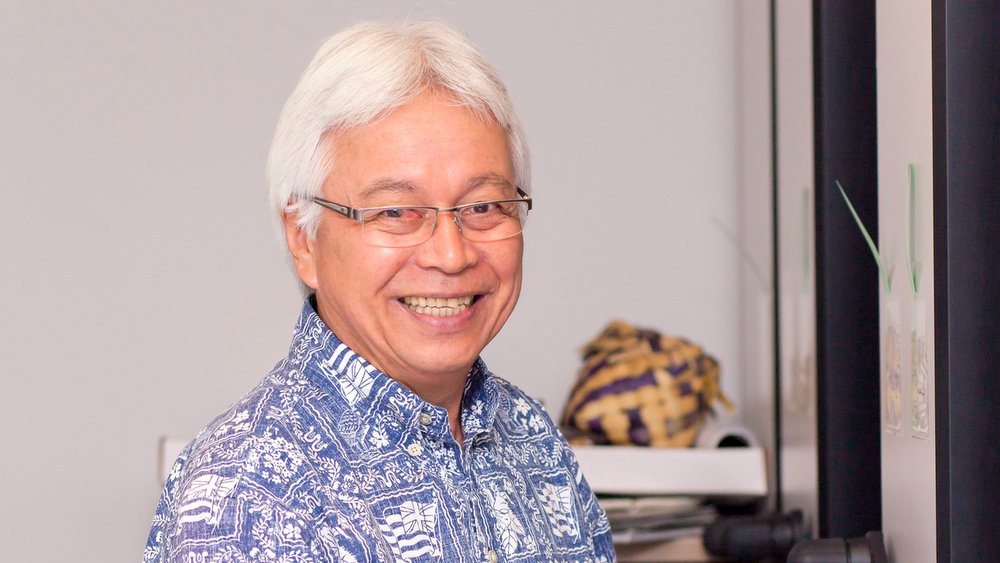 Associate Professor Kimura is the internationally renowned “grandfather” of Hawaiian language revitalization. His decades of work can be traced back to the conception of core foundational educational programs in the 1980s that launched the rebirth of the Hawaiian language.

Larry Kimura is an associate professor of Hawaiian language and Hawaiian studies at Ka Haka ʻUla O Keʻelikōlani College of Hawaiian Language, University of Hawaiʻi at Hilo. Often described as the “grandfather” of Hawaiian language revitalization in modern Hawai‘i, his work can be traced back to the conception of core foundational educational programs in the 1980s that launched the rebirth of the Hawaiian language.

Among Kimura’s most notable work, he was co-founder of the non-profit ʻAha Pūnana Leo that established the first Hawaiian medium preschools in the 1980s, a cornerstone in language revitalization efforts. He spent 20 years creating audio documentation of the last native Hawaiian language speakers, a vital connection for modern speakers. Kimura also helped conceive and now serves as chair of the Hawaiian Lexicon Committee to create new Hawaiian words.

“A people’s own language is their inherent and precious link to their cultural identity,” says Kimura. “It has evolved over thousands of years, encoding a way of being and understanding the world. Without it, the well being of a people is jeopardized. Yet this vital link is so subtle, hardly to be missed in today’s globalization, and is among the first aspects of a distinct people to vanish as their language is lost to another.”

Kimura says cultural features may linger, such as literature, food, crafts, songs and dances, giving the impression of a surviving culture, without the people realizing that its main artery, the language, was the very first cultural aspect to be severed.

“It is astonishing, but perhaps not so surprising, how something so precious is allowed to become extinct,” he says.

Kimura was co-founder of the ʻAha Pūnana Leo Hawaiian medium preschools in the 1980s that initiated the return of the Hawaiian language into the home through three- and four-year-old children and continues to do so until today. In tandem, he was instrumental in the establishment of UH Hilo’s Hale Kuamoʻo Hawaiian Language Center, a center he had proposed in testimony to the Native Hawaiian Study Commission, a commission created by Congress in 1980 to conduct a study of the culture, needs and concerns of native Hawaiians.

Kimura says the need for such a center became crucially evident in the 1988 legislative session to address the newly approved 1987 Department of Education Hawaiian Language Immersion Program, which lacked a program to provide qualified Hawaiian immersion teachers and curriculum.

Kimura served as the first director of Hale Kuamoʻo in 1989, and while the budget for that endeavor was being worked out, he secured a grant from the Funds for the Improvement of Post-Secondary Education (FIPSE) to carry out the initiation of Hawaiian immersion teacher support and curriculum development through the Leo Ola summer institutes.

“Creating new words is done one at a time,” Kimura says. “It is tedious, time consuming work. What keeps this work progressing is pure commitment for the survival of the language.”

The lists of new words created by the two committees contributed to the 6,500+ entries that are in the 2003 publication of the new Hawaiian words book, Māmaka Kaiao (The Lifting of a New Dawn). It is the second most popularly used Hawaiian dictionary, next to the major Hawaiian dictionary by Mary Pūkuʻi and Samuel Elbert. The committee’s current unpublished list of new words consists of approximately 1,200 entries and is made available as a pdf document online through the Ulukau electronic library.

From 1991 to 2003, the group has held annual conferences in New Zealand, Tahiti, Rapa Nui, and in 1993, at UH Hilo. The main subjects of the meetings are to share language programs initiated in each Polynesian country to address the concern for the wellbeing of each native Polynesian language.

“This helped to assure these tiny and scattered countries of the Pacific can be large and united as one for the welfare of our languages, no matter the differences in our government affiliations,” says Kimura.

Kimura says the goals of the Polynesian Languages Forum are currently more relevant to the College of Hawaiian Language since 1993 when the Department of Hawaiian Studies hosted the conference.

“Now that the Hawaiian program has attained the college status becoming the first UH Hilo program to offer a graduate program with a master of arts in Hawaiian and a doctor of philosophy in Hawaiian and Indigenous Language and Culture Revitalization, the continuation of the Office of the Secretary General of the Polynesian Languages Forum becomes more important,” Kimura explains. “Collaboration in publishing, teacher and student exchange programs and the establishment of a Polynesian words and terminology database are more relevant now for the college than in 1993.”

In other work, Kimura served as co-chair of the UH Committee for a new Mauna Kea Management Master Plan in 1998-2000. UH requested that the newly established College of Hawaiian Language at UH Hilo chair the Mauna Kea Advisory Committee, and so along with co-chair William “Pila” Wilson, head of the Hawaiian studies division at UH Hilo, Kimura led this work through controversy and criticism, working with UH Hilo, the UH Institute for Astronomy, environmental groups, the business community, native Hawaiian organizations, state agencies, county government, and the broader Hawaiʻi community.

“It was a prolonged and difficult task that would span nearly two controversial years conducting public hearings until the summer of 2000 when the UH Board of Regents approved the new Mauna Kea Science Reserve Master Plan,” Kimura says.

Kimura also served as Hawaiian culture planner and interpreter for the Maunakea Astronomy Education Center (later named ʻImiloa Astronomy Center). Over a five-year period starting in 2001, he and his assistant created all the Hawaiian exhibits at the center. Kimura offered the Hawaiian name for the center, ʻImiloa, based on a quotation by one of Hawaiʻi’s early Hawaiian scholars, Kepelino, of the mid-nineteenth century: Ahu kupanaha ka ʻike iā Hawaiʻi ʻimi loa! (Astonishing indeed is the knowledge of the Hawaiian people, acquired by seeking and delving deep and wide!)

In January 2014, Kimura served as co-chair with colleague William Wilson, to organize the 2014 Stabilizing Indigenous Languages Symposium hosted by UH Hilo College of Hawaiian Language. The conference brought 200-plus participants, mostly indigenous peoples, to UH Hilo where the newly completed College of Hawaiian Language building, Haleʻōlelo, was one of the conference venues.

Kimura’s plans for the future are as rich and important as any of his past work.

He will advance his collection of audio recordings that he has documented over some 45 years, as well as other sources of native Hawaiian sound recordings, into a digitized audio database.

He’ll continue to enrich and deepen the Hawaiian lexicon. He looks forward to developing more courses that give students an introduction to some aspect of the community for a more meaningful application of their classroom education.

He also hopes to organize and attend more symposiums or conferences on language revitalization. He’d like to refocus the Te Vaka Reo Polynesian Languages Forum to address changing needs. He says since the last meeting of this organization in 2003, changes diminishing the vitality of several of these Polynesian languages have surfaced and the reactivation of his office as the secretary general of Te Vaka Reo becomes more imminent.

“The Hawaiian language remains on the list of the world’s endangered languages and though there have been some major inroads accomplished for Hawaiian’s survival over the last 30 years, there is still much more to do,” he says.

For more in-depth information about Kimura’s work, see the extended written Q&A used as the primary source for this profile (PDF).

Kimura received his master of arts in Hawaiian language and literature and his doctor of philosophy in Hawaiian and indigenous language and culture revitalization from UH Hilo. He was a Mellon Hawaiʻi Fellows Doctoral Scholar, 2011-2012 (see story in The Leaflet Jan/Feb 2012 produced by The Kohala Center: “In Language There Is Life”).