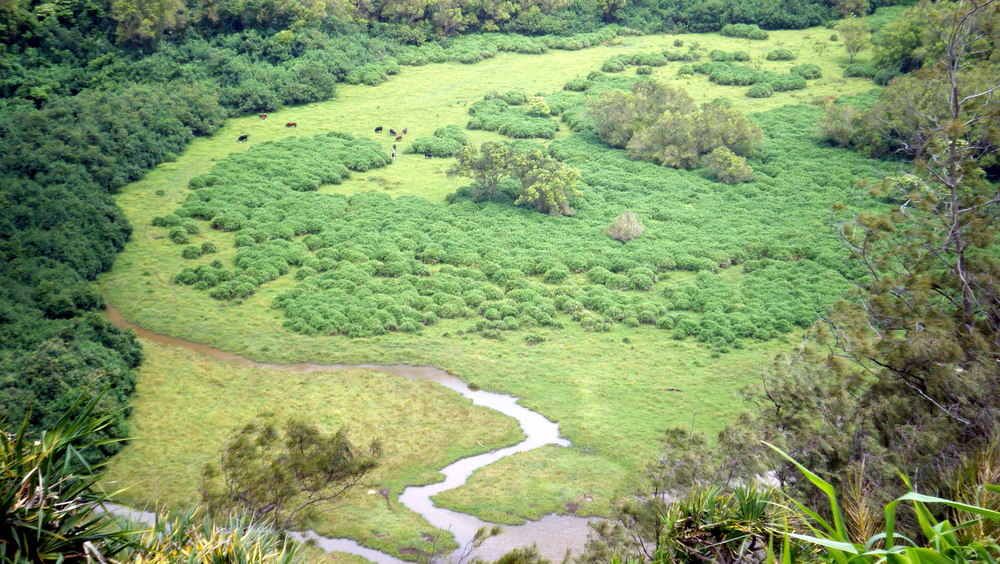 Bruce Mathews is a professor of soil science and agronomy at the University of Hawai‘i at Hilo. He currently serves as interim dean of the College of Agriculture, Forestry and Natural Resource Management.

Mathews’s areas of research are plant nutrient cycling and soil fertility as affected by environmental conditions and crop management; assessment of the impact of agricultural and forestry production practices on soil, coastal wetlands, and surface waters; and development of environmentally sound and economically viable nutrient management practices for pastures, forests, and field crops in the tropics.

Mathews is best known for his research on nutrient cycling in tropical pastures and potentially environmentally sensitive release of phosphorus from pasture soils to surface waters.

“In the humid tropics, structural features of pastures, particularly the position of shade and to a lesser extent water sources have a greater effect on animal redistribution of soil nutrients than stocking method and associated stocking density-mediated effects on competition for forage,” he says. “This is in contrast to findings in cooler temperate climates where rotational stocking methods with short grazing periods and high stocking densities tend to promote more homogenous distribution of animal excreta on pasture than other stocking methods. In the humid tropics, cattle tend to congregate under shade during the warmer parts of the day, regardless of stocking density.”

In other research, Mathews discovered hilograss is a sulfur hyperaccumulator to the point that the high sulfur concentrations can have adverse effects on grazing cattle performance. Another of his research projects showed soil exchangeable calcium protects some minerals in soils from dissolution by complexing certain organic acids.

Other of his studies show the apparent influence of hydrologic conditions on the relative importance of amorphous iron in retaining phosphorus in Hawaii’s iron rich soils. He discovered phosphorus availability in Hawaii’s kikuyugrass pastures was great enough that the phosphorus concentration in mineral supplement premixes for grazing livestock could be reduced by 25 to 50 percent, while calcium supplementation needed to be increased due to lower bioavailability of organically complexed calcium for horses relative to ruminant livestock.

Mathews also discovered the benefit that annual nitrogen fertilization of pastures can have on increasing earthworm populations and thereby nutrient recycling efficiency.

One study with favorable results actually ended up being a disappointment. The study showed outstanding daily weight gains of 2.0 to 2.4 pounds per day for cattle that could be obtained when perennial forage peanut is established in pastures.

“The high costs of imported forage peanut seed and the labor associated with vegetative propagation alternatives prohibited adoption of this forage in Hawai‘i,” he says. “Nevertheless over 200,000 acres of this forage have been planted in pastures elsewhere in the tropics.”

The main benefits of Mathews’s research have been improved management recommendations that benefit farmers and the environment.

“For example, little environmentally sensitive phosphorus release to surface waters was predicted until the phosphorus saturation index of Hawai‘i’s upland soils exceeded six percent and that for wetland — alluvial valley soils — exceeded 10 percent,” he says. “This means that phosphorus in fertilizers and manures should not be applied to such soils when the threshold saturation index has been attained.”

Mathews has traveled to the Philippines on several projects related to his work and did a sabbatical leave there during 2001-2002.

Currently, Mathews is examining the effects of hydraulic gradients in Hawai‘i’s wetland valleys on soil biogeochemistry and redox mediated transformations of iron and phosphorus. He is also doing comparisons of soil properties along hydraulic gradients of former Hilo Coast sugarcane lands presently in pasture and planted forest with those of native forests on the same soil types. In another project, he is examining a five-fold range in hilograss sulfur concentrations on in vitro digestibility and production of toxic hydrogen sulfide.

Mathews also has a grazing trial underway at the UH Hilo Farm Laboratory in Pana‘ewa to compare the performance of Angus and locally developed dual purpose Zebu-crossbred cattle on mixed mulatograss-guineagrass-glycine pastures. Mulatograss is a new Brachiaria hybrid grass that was developed from two Brachiaria species already existing in Hawaii.

In the future, Mathews hopes to spend more time on Big Island community outreach and summarizing local and international tropical agricultural research that is relevant to the island.

Update 2014: Professor Mathews talks at forum on campus entitled, “Building Momentum Toward a Resilient and Sustainable Local Farming Culture.” The panel was held on May 22, 2014, and hosted by the college and the County of Hawai‘i.