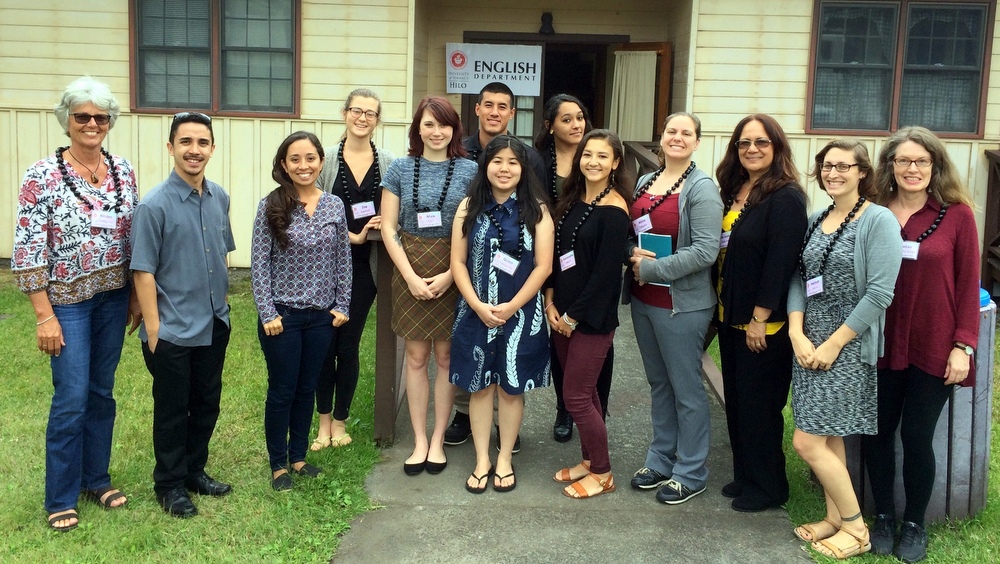 The unifying theme of Professor Møllegaard’s research is the triangulation of people, places, and stories. She explores folkloric and literary aspects of people’s physical environment.

Kirsten Møllegaard is a professor of English at the University of Hawai‘i at Hilo. She specializes in oral tradition and folklore, and her research reflects a broad range of interests in literature and film.

“The unifying theme of my research ever since graduate school has been the triangulation of people, places, and stories,” she says. “I am interested in both the folkloric and the literary aspects of how people perceive the physical environment around them, how social identity is constructed in relation to place, and how stories, whether in oral or literary form, structure and articulate people’s experience of place.”

Møllegaard received her bachelor of arts in English from UH Hilo in 2002 and says she is very happy to come back as a permanent faculty member. She received her master of arts and doctor of philosophy degrees from UH Mānoa, and has been teaching at UH Hilo since 2005, beginning as a freshman composition and women’s studies teacher.

When asked to name her favorite author, she says she loves them all, but especially appreciates “good stories with a narrative that has a sense of meaning and place” where the “plurality of perspective is captivating.” One of her favorite writers is V.S. Naipaul, a British-Caribbean writer who offers the colonial experience to readers. She also loves fairy tales and legends, believing they intersect both the oral and literary aspects of culture.

Møllegaard has published many works in Scandinavian journals. Some of her works are directly focused on Hans Christian Andersen, while others involve studies on urban legends. She also is interested in narrative and cultural formation in Hawai‘i, which is the topic of her published article, “Aloha Ahoy: Tourism and Nostalgia at Honolulu Harbor.”

Møllegaard’s research follows two strands, one on literary texts and one on folkloric texts.

On the literary side she focused on the concept of “home” in Wyoming Stories, a trilogy of short stories by the American writer Annie Proulx. She presented her paper at the Western Literature Association’s annual conference in Berkeley, California.

She explains that the concept of home holds a privileged position in Western cultural and social discourse. It describes both an imaginary cultural construct and physical living spaces.

“As a space of social production, home produces and maintains values and ideas about tradition, subjectivity, and identity,” she says. “As a space of representation in the literature and cinema of the American West, home has traditionally been paired in a binary opposition to the open range or the empty landscape, thus producing a highly gendered discourse on the social production of feminine and masculine spaces, community versus individuality, settlers versus nomads.”

A paper on a related topic, “Cold Love: Silence and Otherness on the Northern Frontier,” was published in the March 2013 issue of The Journal of American Culture. This paper explores the themes about home in a comparison of two works of fiction set in Alaska, one told from a Native American point of view (Leslie Marmon Silko’s “Storyteller”) and the other from a settler point of view (Kathryn Harrison’s The Seal Wife). Møllegaard explains both narratives explore the dynamics and tensions of the frontier as a cultural contact zone and draw on the mythology and folklore of the frontier as a marker between “them” and “us.”

“The importance of the frontier as a geoimaginary symbol of the American experience is evident in many genres of American literature,” she says.

Møllegaard often includes her students in her research endeavors.

“Because of our location, the high cost of travel, and the exclusion of undergraduates from most national academic conferences, it is not easy for our students to find venues to present their work,” she says. “I have been fortunate to be able to travel to international conferences with students on two separate occasions, but I am continually looking for ways to make conference presentations an option for more students.”

Møllegaard co-wrote a paper with UH Hilo English major Robin Belcher (BA, Spring 2013) entitled, “Death, Madness, and the Hero’s Journey: Edgar Allan Poe’s Antarctic Adventures,” which examines Poe’s representation of the then-ultimate frontier and terra incognita, Antarctica, in his only published novel The Narrative of Arthur Gordon Pym of Nantucket. Møllegaard and Belcher co-presented the research paper at a conference in Rome, Italy, in October 2012, and the joint paper was subsequently published in The International Journal of Arts and Sciences (2013).

With English major Brittany Dayton (BA, Spring 2011), Møllegaard developed an oral history project based on fieldwork and observations of the changing landscapes and depopulation of Kalapana, Hawai‘i. The team co-presented the research at an interdisciplinary conference in Kalmar, Sweden, in September 2011.

Some of the gender-related issues Møllegaard uses in her research have been on the perception of women’s “place” in domestic spaces and on the economic and political implications of such spaces. For example, in her article, “Cold Love: Silence and Otherness on the Northern Frontier,” she says she uses literary analysis to “unpack the colonial gender paradigm embedded in romantic love stories involving a white male outsider and an indigenous woman.”

Møllegaard, who received her master of arts in English and her doctor of philosophy in English from UH Mānoa, says her research on gender mirrors her commitment to cross-list many of the English film and literature courses she teaches with the gender and women’s studies certificate program.