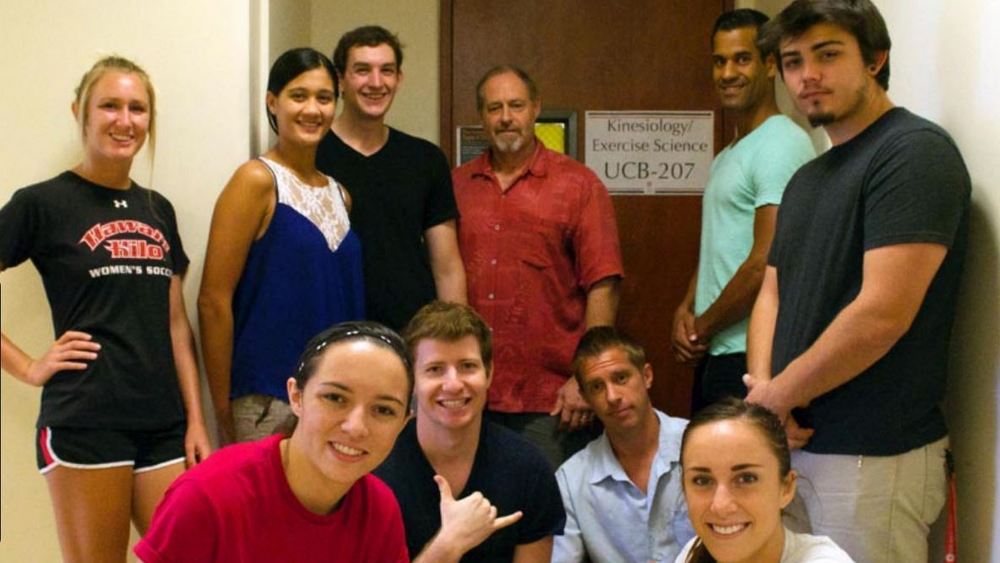 Gotshalk is director of the Laboratory for Exercise Sciences, which manages concurrent research projects. The exercise lab provides undergraduates with a unique opportunity to learn research techniques and involve themselves in actual research investigations run by Gotshalk. Many students either volunteer to assist, or participate for credit in the data collection procedures and the day-to-day operations of the laboratory.

Contributions to the literature

Gotshalk’s most significant contribution to the international body of knowledge has been in the study of creatine supplementation in the aged population, and its affectations of neurological, neuromuscular, muscular, and anthropometric physiology, and physical performance.

“The basic, overlying premises of my work are that such supplementation via a specific protocol can act as an enhancer of neurological, neuromuscular, and physical performance function in aged 65-plus-year-old individuals,” he explains. “Systematic creatine supplementation by the aged may act as a prophylactic to unnatural, and, subtly, to natural, decline of many of the functional systems–neurological, neuromuscular, and proprioceptive—in the aged.”

A creatine of his study shows promise in enhancing these findings without the subjects changing lifestyles, for example, implementing new exercise programs or regimes, or implementing a new diet.

Gotshalk’s most current contributions to the literature have been in the field of stress physiology: the effects of physiological and psychogenic stress on the human physiology. An intensive study of UH Hilo student-athletes over a period of six years has provided much information on the affects of the stress of an athletic season on women and men student-athletes. The most prominent findings show decreases in lean body mass, including specific-area bone density, increases in resting heart rate and blood pressure, decreases in muscle strength and power, and no change in body fat percentages.

Gotshalk’s most nationally prominent research conducted at UH Hilo is his studies on exercise volume as correlated to supercompensating endocrine (hormonal) responses. His study on  the effects of “one set versus three sets” exercise designs show that there are significant differences to the training programs, with the “three sets” group showing a more beneficial positive endocrine response to the increase in exercise volume. This research has been cited often in the debate on the topic.

“My findings were contrary to a growing notion in the field of exercise sciences, at the time, that abridged training protocols were just as effective as unabridged ones in producing training results,” explains Gotshalk. “My premise was that it was necessary to study the actual physiological supercompensating signals stimulated by exercise in order to determine the most effective training protocol for intended results.”

Gotshalk also has discovered that extended creatine supplementation plays a positive role in the cognitive, proprioceptive, and neuromuscular performance and well-being of aged women and men. Other studies have shown creatine supplementation increases strength, power, and anaerobic power in older adults, but Gotshalk’s work has added another dimension to the field.

In research on stress, Gotshalk discovered that extended or seasonal stress in women and men student-athletes causes a subtle, yet notable and concerning, shift in body fat deposition. Though the large number of athletes studied did not lose or gain body fat percent, there was a subtle but statistically significant shift of body fat volume from hips, appendages, and breast fat to android (trunk) fat due to extended stress of athletic seasons.

“This is a marked finding, since increased android fat is highly correlated to cardiovascular disease and numerous other pathologies, for example, metabolic syndrome, type II diabetes, hippocampus damage in the brain, and others,” he says. “I am investigating the role of endocrine action, particularly elevated glucocorticoid levels, due to unabated stress as opposed to thrilling experiences such as roller coaster rides, parachuting, and games, which are abated stresses with a known end-point.”

Gotshalk says this research implies not that student-athlete seasonal stresses are a detriment to the athletes, but that if such responses to stress are noted in well-trained young men and women, that the physiological results from extended physiological and psychogenic stressors such as employment, socioeconomics, and interpersonal relationships on older men and women, a population that has been shown to have had an increase in obesity, metabolic syndrome, and type II diabetes over the past three decades, is important to note and find alarming.

“These findings taint the prototypical blame game that over-eating, and under-exercising are the main, or even sole, reasons for the increase in type II diabetes and obesity,” he says. “The electronic age has added a new dimension of stress to the average daily life of humans—more instantaneous impersonal interactions, increasing floods of often useless information, more instant demands on time and energies—all create unintended stresses that are seemingly ceaseless and may stimulate overt unabated glucocorticoid responses detrimental to health.”

Prof. Gotshalk received his master of science in exercise physiology from Temple University and his doctor of philosophy in physiology of exercise from Pennsylvania State University.