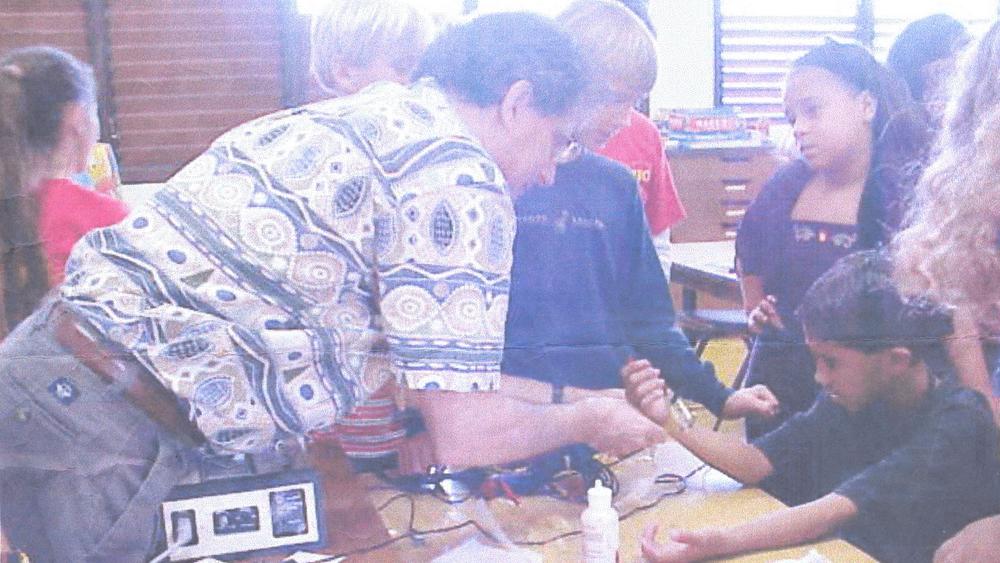 Professor Emeritus Brown researches psychosocial stress and ethnic health disparities. His work grows out of interest in how humans, individually and in populations, adapt to environmental stress.

Photo above: A group of school children visit Professor Brown’s lab, where he shows them some of the instruments used in his research.

Editor’s note: This profile was published Oct. 1, 2013; Prof. Brown retired in 2017. He is now Professor Emeritus of Anthropology at UH Hilo.

Daniel Brown is a professor of anthropology at the University of Hawai‛i at Hilo.  He has been a member of the faculty for over 30 years, also serving at different times as department chair, social sciences division chair, coordinator of research and graduate education, and interim vice chancellor for research. He also has served as president of the Human Biology Association, and is a fellow of the American Association for the Advancement of Science

Prof. Brown’s research focuses on human adaptability to physical and psychosocial stress, as well as on ethnic health disparities. He is particularly interested in the interactions between biology and culture, and the impact of those interactions on health.

“My research grows out of my interest in how humans, individually and in populations, adapt to environmental stress,” says Brown. “I have carried out research on adaptation to physical stressors, such as high altitude hypoxia, cold and heat, but my main interest has been in adaptation to psychosocial stress.”

“My research on psychosocial stress brought me to Hawai‛i many years ago, where I studied how Filipino-American immigrants adapted to rapid culture change and life in a new environment,” he says. “I found that traditional ways to measure psychosocial stress, through self-reports, such as questionnaires and psychological instruments, had drawbacks, because cultural differences exist in what is deemed appropriate to report to others, and this led to ethnic differences in measures based on self-reports.”

For people undergoing culture change, it was unclear what the changes in scores represented: a change in the amount of stress or a change in how one responded to a questionnaire.  Brown therefore introduced the idea of using biological markers (called biomarkers) of stress in anthropological fieldwork to avoid the problem of what is termed “reporting bias.”

The use of biomarkers in anthropological research is arguably Brown’s most significant contribution to the field, and their use played an important role in his subsequent research on the frequency of hot flashes in Japanese and Japanese-American women.

Brown says he is very interested in evaluating and utilizing new types of biomarkers of chronic stress.

Some results of Brown’s studies include work with immigrant Filipino-Americans residing in a community near Honolulu where it was discovered that stress hormone levels were elevated in immigrants with an intermediate degree of Americanization compared with those with either very little or a great deal of contact with American culture.

“In a study of Filipino-American immigrant nurses in the Hilo region of Hawai‘i, we observed that nurses who had resided in the U.S. for a long time period had higher noradrenaline excretion rates and higher blood pressure levels during sleep than those who were more recent immigrants,” Brown explains.

Brown has followed up on literature showing that Asian Americans tend to have higher rates of hypertension (high blood pressure) and strokes than many other ethnic groups in the U.S.

Other research has shown that maintaining high blood pressure during sleep is a particularly good predictor of bad outcomes, including later hypertension and strokes. “Therefore, our research suggests that simply monitoring blood pressure at doctor’s visits may not be the best way to recognize people who are at risk,” explains Brown.

Brown’s research has largely involved collaborations, and he has worked with many former and current UH Hilo faculty members, as well as with researchers from the mainland and internationally.  His UH Hilo collaborators have included Craig Severance and Lynn Morrison in anthropology, Jerry Johnson in psychology, Bill Mautz and Cam Muir in biology, and Lincoln Gotshalk in kinesiology. He also has worked with Lea Nordloh and Joyce Hamasaki from Hawai‛i  Community College.

Brown says the research he has done with these and other collaborators benefits the local community because it investigates possible reasons for ethnic disparities in health as a means to find better means of prevention of chronic diseases.

“I am interested in working more on research that can be directly applied to reducing health disparities in Hawai‛i and other Pacific island communities,” he says.

Collaboration with undergraduate students is also an important part of Brown’s research.

“This collaboration has enhanced my research and I hope provided the students with good hands-on experience,” he says.