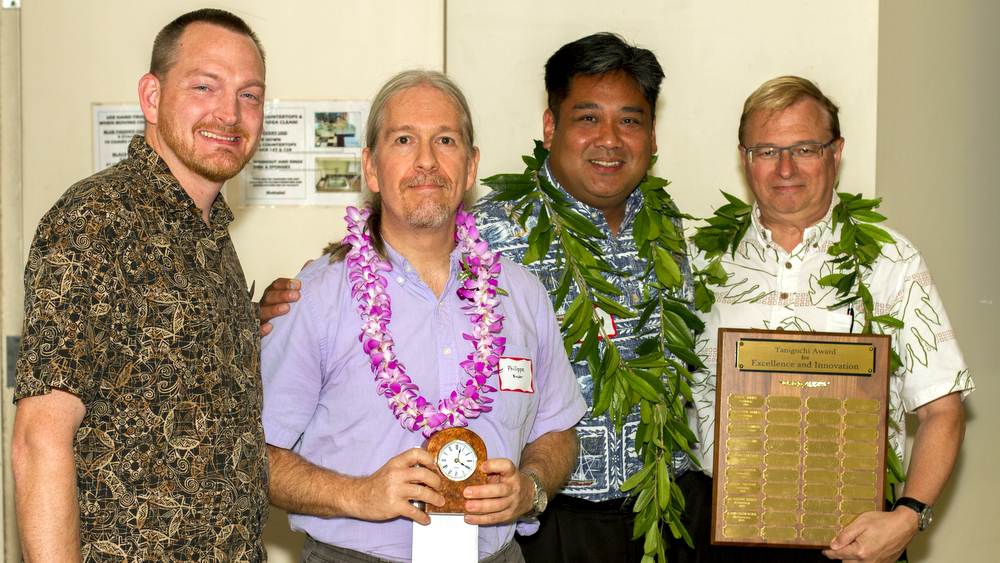 Above photo: Philippe Binder, professor of physics, (second from left) and colleague Ramon Figueroa-Centano, associate professor of mathematics (did not attend event), received the 2013 Koichi and Taniyo Taniguchi Award for Excellence and Innovation for their work on 3-dimensional visualization of complex mathematical objects at ‘Imiloa Astronomy Center planetarium. (l-r) Shawn Laatsch, who nominated the team for the award; Prof. Binder; Toby Taniguchi; and Chancellor Don Straney. Photo by Jaysen Niedermeyer.

Themes of Professor Binder’s research have included time series analysis, the relation between chaos and theory of computation, and the study of siphons.

Philippe Binder is a professor of physics at the University of Hawai‘i at Hilo. His research interests include nonlinear dynamics, statistical mechanics, complex systems, time series analysis, theory of computation, biologically-inspired physics, and information processing by nonlinear systems.

“The motivation for my research has always been to try to understand the world a little bit better by satisfying my own curiosity rather than to try to have a huge impact on my field,” he says.

That said, when pressed, Binder cites two pieces of his research that do hold potential impact on his field. One resulted from work done around 1990 with Daan Frenkel in Amsterdam.

“By the use of a very clever computational technique he developed, we resolved a twenty-year enigma in the kinetic theory of gases,” says Binder. “Gas molecules that bounce in a fixed array of obstacles preserve a very subtle memory of their earlier velocity. Early simulation results for the mathematical form of this memory effect were in disagreement with theoretical results. The research Frenkel and I did on this topic not only cleared up [that] but also explained the earlier discrepancy.”

The second piece of work was done at UH Hilo, and started as a term project for a course on chaos.

“I had an idea for a technique to discern if a series of data taken over time is likely to originate from a random process, or a deterministic, law-like one,” Binder says. “Other determinism tests are available, but this one works with time series with as few as 50-100 data points. The work was published in 2005 with students Ryu Igarashi, Will Seymour and Candy Takeishi as co-authors. Since then, I have had several requests from scientists in different fields to fully explain the method so they can implement and apply it.”

When asked about the most surprising find in his work, Binder quotes rocket scientist Wernher von Braun who said, “Research is what I am doing when I don’t know what I am doing.”

“Every good piece of research should have at least an episode of trepidation followed by a moment in which things fall into place,” says Binder, citing two examples of his own work.

In a project with colleague Brian Wissman, an associate professor from the UH Hilo mathematics department, the research team generated matrices that described the probabilities of obtaining certain combinations of measurements of a chaotic system when these were taken a certain time apart.

“I asked Brian to color code the numbers in the matrices and produce a movie with the successive pictures,” says Binder. “The first frame of the movie was a diagonal line, but then a pattern emerged that looked very familiar: it was a geometrical description of the dynamics that produced the data. We were astounded. A few minutes later I was able to explain what we saw.”

The movie has been very well received at conference talks, as it has the power to surprise other people as well. It is also an online supplement to a paper Wissman and Binder published in 2010.

The second example of a surprise in Binder’s work is more personal. A while ago, he was contacted by someone from France who had read a paper Binder published in a very visible journal.

“It turns out he was a very solid, well-known experimental geneticist,” says Binder. “He wanted to engage in a discussion about information processing in cells. We began educating each other, with me doing most of the learning. It became a thrill to receive his emails, and we eventually published a paper on cell repair and maintenance in 2011.”

Binder stills work with this scientist, Prof. Antoine Danchin, and says the correspondence course in cell biology is still ongoing.

“Unexpected collaborations can enrich a scientist’s life as much as anything,” says Binder.

In work with Mark Kimura, a National Science Foundation-funded postdoctoral fellow, Binder has been studying computer models of the future of the island of Hawai‘i.

“We are doing our work based on World3, the model that was used in the famous Limits to Growth book in the 1970’s,” he says. “While this work was controversial, we believe that the model is essentially sound and captures well the interactions between resources, human population and its activities, and the environment.

“Our main question was: What future scenarios are possible for our island, sunny and fertile, but isolated and very poor in nonrenewable resources?” he says. “We have extended the World3 model so it couples what goes on in the rest of the world with our island. The results so far are worrisome. We hope that once validated we can publicize them in order to increase awareness not only of our own fragility but also of the paths that lie ahead for us.”

Binder says he considers himself a non-programmatic researcher. While most of his work is in the broad areas of chaos and complex systems, he says he tends to pick a narrower theme, work on it for a few years, and move on. Recent themes have included time series analysis, the relation between chaos and theory of computation, and the study of siphons.

“I have worked successfully under this system for 25 years,” he says. “Even though it is more difficult to find funding for such short-term efforts, this suits well my skills and personality.”

Binder had some training in the liberal arts and in philosophical foundations of science during his graduate student and postdoctoral years, and says he has been fortunate to teach courses that emphasize the concepts and ideas underlying several areas of physics.

“Just last semester I taught a seminar in foundations of thermodynamics where the students and I read and discussed a book on this subject that I have been meaning to read for a decade,” he says. “This has rekindled my interest in foundational issues, and I would not be surprised if, after wrapping up a few ongoing projects, this becomes my next research theme.”

“There will always be another theme,” he says. “Until the end, the goal will be to enjoy myself, introduce a few more students to research, and understand the world a little bit better.”