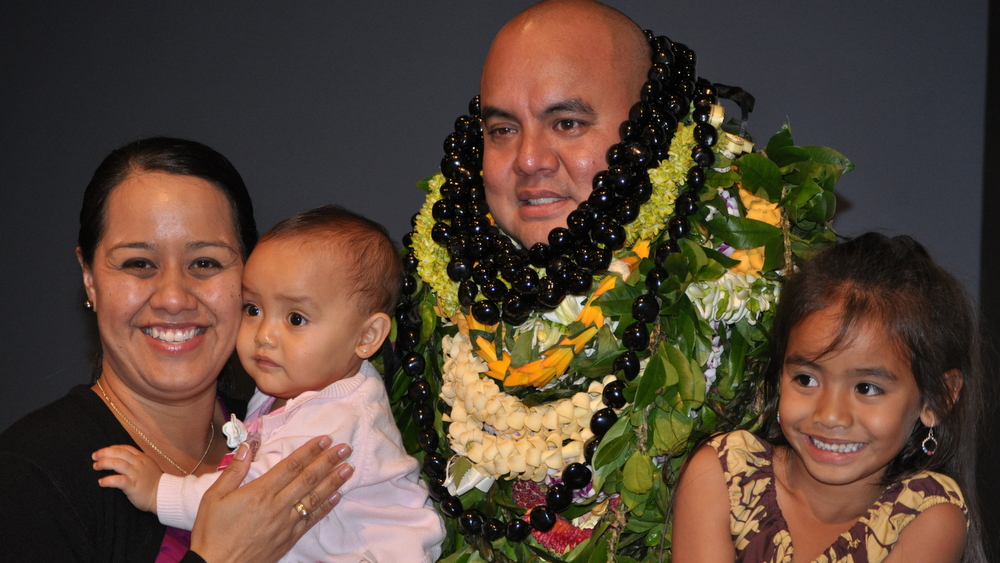 Photo above: Hiapo Perreira at his dissertation defense with (l-r) wife Hanakahi and daughters Keakamaluhiwa and Keanokualani, 2011.

Associate Professor Perreira recovers traditional Hawaiian oratory. His work has the potential to play a vital role in the overall revitalization of the Hawaiian language by providing another context for Hawaiian expression.

Hiapokeikikāne Kichie “Hiapo” Perreira is an associate professor of Hawaiian language and literature at the University of Hawai‘i at Hilo. His research focuses on the recovery of traditional Hawaiian oratory.

Perreira was the recipient of a Mellon-Hawaiʻi Doctoral Fellowship in 2010, and received his doctor of philosophy in Hawaiian and indigenous language and culture revitalization from UH Hilo in 2011. He wrote his dissertation on traditional Hawaiian oratory and his method of revitalization. Since becoming associate professor in 2010 at UH Hilo’s Ka Haka ‘Ula O Ke‘elikōlani College of Hawaiian Language where he began as a lecturer in 1996, Perreira has developed a Hawaiian literature and oratory strand of academic courses. He developed three upper division courses on Hawaiian literary analysis, an introduction to advanced Hawaiian literature, and a course on the research and performance of traditional Hawaiian oratory.

Ho‘oulumahiehie’s telling of the Kawelo story is the longest and most comprehensively written in Hawaiian on this larger-than-life historical figure, from his exploits as a youngster to his battle for rule of the island of Kaua‘i. Ho‘oulumahiehie masterfully weaves ha‘ako‘iko‘i (formal) and kauhale (informal) styles of language, utilizing oratorical expressions, exhaustive explanations, precise terminology, and conventional discourse–an addition to the corpus of Kawelo literature that is unparalleled in scope, depth, and literary history. This work is intended as a useful guide for high school and college students, as well as other serious students of the Hawaiian language seeking a more comprehensive understanding of Hawaiian cultural practices.

Perreira had a 57-page article accepted for publication in the journal Hūlili: Multidisciplinary Research on Hawaiian Well-Being (2013). From the abstract:

The scope of the paper, based on the Kumu Honua Mauli Ola Philosophy of Hawaiian Being, centers on the explication of meiwi mo‘okalaleo (Hawaiian ethno-literary devices) and hualekikona (lexical-items). When applied to the study of traditional Hawaiian literature, meiwi mo‘okalaleo and hualekikona provide a contemporary way to analyze literary pieces, not only for cultural content, but more importantly for style and makeup. Proficiency in this respect can have a great impact on the enrichment of Hawaiian speech in general, and can contribute greatly to the composition of a neo-classical Hawaiian literary corpus (pāpā‘ōlelo, mo‘olelo, kākā‘ōlelo, etc.), thus preserving traditional Hawaiian style for posterity.

More academic articles underway: one on a specific type of ancestral worship found in the story of the high chief Kaweloleimakua, and the other on metaphorical referents in Hawaiian sacrificial offerings. Perreira also has book project underway: one on ethno-literary devices and lexical items as exhibited in a traditional full-length story on the high chief Lonoikamakahiki; the other on his dissertation.

Perreira points out that his academic work is but one part of his contribution to the revitalization of Hawaiian language and oral tradition.

“In conjunction with my academic activities, I am a fluent speaker of Hawaiian who promotes this living language with all other speakers of Hawaiian,” he says. “My wife is fluent and we are raising our daughters in Hawaiian. They are both students in the Hawaiian medium educational program here in Hilo. Our oldest is in the first grade at Ke Kula ‘O Nāwahīokalani‘ōpu‘u [Hawaiian language immersion school], and our baby is in the Hi‘ipēpē infant-toddler program of the Pūnana Leo o Hilo Hawaiian preschool.