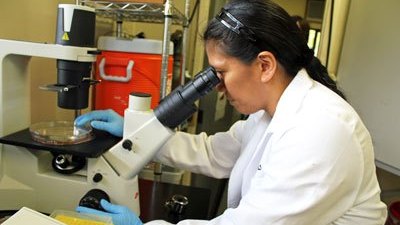 Dana-Lynn Koomoa-Lang is an associate professor of pharmaceutical sciences at the University of Hawai‘i at Hilo. She is an independent researcher at the Daniel K. Inouye College of Pharmacy in Hilo investigating the role of novel proteins in the malignant progression of cancer. She was awarded a prestigious National Institutes of Health grant to continue her research.

Specifically, Koomoa-Lange is studying the interplay between signal transduction and calcium signaling pathways in the malignant progression of neuroblastoma, which is a childhood cancer. Her most significant contribution to cancer research is her ability to combine multiple techniques to study a unique aspect of cancer progression that has barely been tapped.

“I am very excited that the College of Pharmacy provided excellent equipment that allows my lab to perform the electrophysiological experiments required to examine the role of calcium channels in cancer progression, and perform molecular biological and biochemical techniques,” she says. “All of these techniques combined allow a more in-depth investigation into the role of these channels in cancer.”

Koomoa-Lange’s lab investigates the role of ion channel proteins and channel regulatory proteins that are often modulated in cancer and tumor progression. Her work has shown that these calcium- and magnesium-permeable ion channels, and channel regulatory proteins, play a critical role in regulating neuroblastoma tumor growth and metastasis, while inhibitors of these proteins inhibit these processes.

In addition, the lab investigates the role of these proteins in other physiological and pathophysiological processes, e.g., immune cell function and central nervous system disorders. Koomoa-Lange’s projects involve the use of molecular biological, biochemical and biophysical techniques.

Currently, the researcher is using the neuroblastoma model.

“The most surprising finding has been the extent to which I’m finding connections between calcium signaling and the malignant progression of cancers, development of chemoresistance,” she says.

In addition to her research, a large part of Koomoa-Lange’s scholarly activity involves increasing diversity in science, technology, engineering and math or STEM fields.

“Our PharmD and PhD students will be presenting their work (at an upcoming workshop) to increase diversity in STEM, and to improve healthcare to rural communities and diversity in healthcare education,” she says.

In addition, UH Hilo Chancellor Don Straney and marine science professor Misaki Takabayashi invited Koomoa-Lange to be on an action committee addressing gender bias and other similar issues in order to increase diversity in STEM fields on the UH Hilo campus.

“I hope that my contribution to diversity programs will have a direct impact on increasing the participation of women and Native Hawaiians in STEM fields,” she says.

Koomoa’s future goals are to further her work in cancer research, to develop novel projects, and uncover new findings that will be relevant to enhancing the treatment options for neuroblastoma patients.

“I hope to extend my research to include investigations into the regulation of metabolic syndrome,” she says. “It is my intention to obtain more extramural funding to support my research efforts, and to (continue to) publish my research findings.”

Koomoa-Lange received her bachelor of science in biology from San Diego State University, California, and her doctor of philosophy in biomedical science from Brown University, Rhode Island.

Originally published on March 18, 2013, and updated on May 11, 2018 to reflect Koomoa-Lange’s hyphenated name and her promotion.