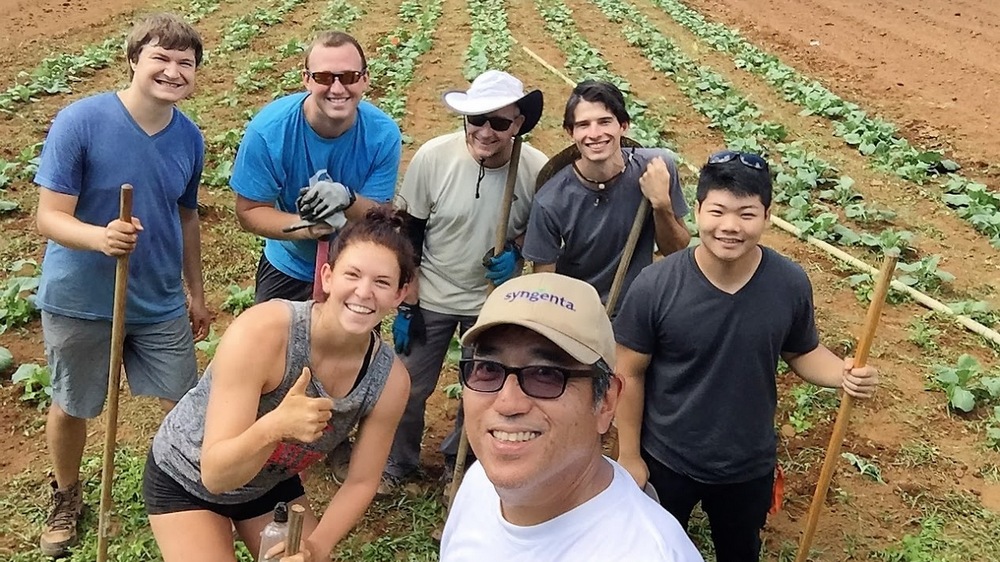 Professor Shintaku has done groundbreaking work on worldwide citrus virus. He now specializes in researching diseases of taro, ginger, and lettuce, all crops of the local agricultural community.

In a landmark study in 2004, Shintaku worked with virologists in California and Florida on the citrus tristeza virus (CTV), a disease that has killed millions of citrus trees around the world causing economic catastrophe in many areas. This was a significant study that contributed a large amount of new information on the biology of CTV.

The research team was able to show that the CTV virus carries three suppressors of gene silencing. At the time, gene silencing was a newly-discovered mechanism involved in preventing viral infection. In order to infect their hosts, plant viruses often carry genes that are able to suppress the silencing mechanism.

“A few suppressors had been discovered at the time, but a single virus carrying three or even two suppressors was unheard of,” says Shintaku. “We were very surprised to find three silencing suppressors in a single viral genome.”

Further, he says, the team was able to elucidate the mode of action of each of the suppressors. The study was published in Proceedings of the National Academy of Sciences USA (2004).

Discovering something surprising in plant pathology was not a new experience to Shintaku. In 1991, while working on cucumber mosaic virus (CMV), he showed that by making a single-nucleotide substitution in the CMV coat protein gene, the symptom expression of that virus changed from a green mosaic to a white mosaic.

“This was surprising, but more surprising was when we found that this substitution also rendered the virus unable to infect squash and unable to be transmitted by aphids,” he says. This work was published in Plant Cell (1991).

Shintaku’s recent work is with taro, ginger, and lettuce, all major crops of the Hawai‘i Island agricultural community.

His work on taro has focused on three things: the evaluation of microsatellite DNA markers for taro identification; the identification of single-nucleotide polymorphisms for use in taro identification and breeding; and the use of a detached leaf assay to rapidly evaluate taro plants for resistance to taro leaf blight caused by Phytophthora colocasia.

“The most important disease of taro is taro leaf blight caused by Phytophthora colocasiae,” Shintaku says. “We are working to develop taro varieties with resistance to P. colocasia.”

Using hand-pollination, Shintaku and his research team are developing new varieties while selecting for disease resistance. They have screened over a thousand individual plants from 14 crosses, and have identified two parental lines that confer very good resistance to their progeny.

Shintaku has identified a large number of single nucleotide polymorphisms (SNPs) in these plants, and says the research team will use these SNPs for two things: “To augment our breeding program by allowing early selection for resistance, and as DNA markers to identify all taro varieties, including the Hawaiian collection as well as varieties from Asia, Guam, New Guinea and Palau that are now grown in various collections in Hawai‘i.”

Looking to the future, Shintaku says he hopes to have a DNA fingerprinting system in place for taro in the next year or so.

“This will help in efforts to preserve the Hawaiian varieties,” he says. “This will also help in taro breeding efforts.”

Shintaku also is studying bacterial wilt of ginger caused by Ralstonia solanacearum, the most important disease affecting ginger cultivation in Hawai‘i. Ginger has been extensively grown in the Hamakua district of Hawai‘i Island, so much of the soil there is infested with this pathogen, he says.

“Once a field is infested, ginger cultivation is impossible for many years,” says Shintaku. “We have developed a test for the presence of this pathogen in soil, and we are testing soil as well as planting material for local farmers.”

Sintaku adds, “We hope to identify a soil amendment that will allow growers to reclaim land for ginger production.”