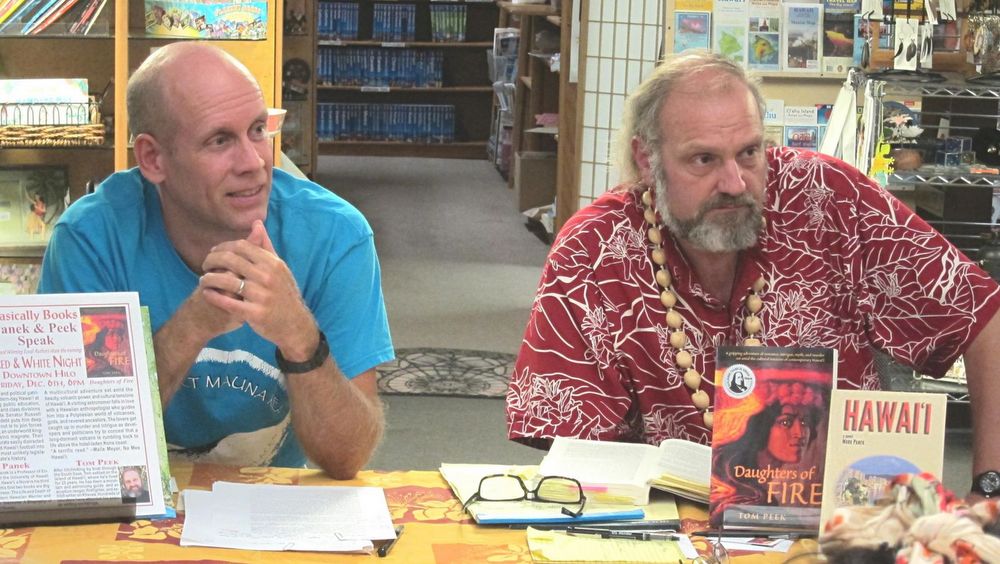 Photo above: Authors Mark Panek (left) and Tom Peek at a reading and discussion of their post-statehood novels: Panek’s Hawaiʻi and Peek’s Daughters of Fire. Basically Books, Hilo. Photo credit.

Professor Panek has contributed significantly to the local canon with two peer-reviewed and award-winning works published by University of Hawai‘i Press.

Mark Panek is an professor of English at the University of Hawai‘i at Hilo. He specializes in creative writing and composition and teaches a variety of interactive writing courses.

Panek has contributed significantly to the local canon with two peer-reviewed and award-winning works published by University of Hawai‘i Press: Big Happiness: The Life and Death of a Modern Hawaiian Warrior (2011) and Gaijin Yokozuna: A Biography of Chad Rowan (2007).

Big Happiness was published to wide acclaim. Honolulu magazine called the story of Waikāne’s Percy Kipapa, “An eloquent biography, not only of [Kipapa] . . . but of the local Waiāhole-Waikāne community in which he lived,” and “a deeply researched, insightful look at the many problems facing Hawai‘i’s poor and rural neighborhoods.”

New York magazine blogger Dan Kois found Big Happiness a “smartly written tale” that “mixes the personal and the political to create a portrait of the Hawai’i tourists never see.” The Japan Times called it “as eloquent as any mystery novel.”

Big Happiness was named the winner of the 2012 Hawai‘i Book Publishers Association’s Ka Palapala Po’okela Award for Excellence in Nonfiction.

Gaijin Yokozuna: A Biography of Chad Rowan preceded Big Happiness. The Japan Times called the story of Rowan’s rise from Waimānalo to the top ranking in Japan’s national sport “the best sumo biography in English,” adding that “few books in English or in Japanese can match it in bringing sumo and one sumotori to vivid, compulsively readable life.”

Gaijin Yokozuna was nominated for the 2007 Kiriyama Prize, the 2007 Los Angeles Times Biography of the Year Award, and the Hawai’i Book Publisher’s Association’s 2007 Ka Palapa Po’okela Award for nonfiction.

“Although the second book, Big Happiness, is about a retired sumo wrestler, sumo isn’t really the topic of that book,” says Panek. “BH uses Percy’s life story to draw attention to the consequences of rampant development in Hawai’i, mainly since statehood.”

Gaijin Yokozuna, on the other hand, says Panek, although it tries to use Chad Rowan‘s story as a window into Japanese culture, is indeed a book about sumo.

“My interest in the sport began when I first lived in Japan not long after finishing my undergrad degree in history,” he says. “Rowan’s story came up as a natural topic in the first graduate seminar I ever took, at UH Mānoa, only months after he’d become the first non-Japanese to reach their national sport’s top rank. The project began as a paper for that class. His family, and later Rowan himself, was so receptive that I made it the subject of my eventual MA thesis, and later my dissertation, which finally evolved into the book.”

Along the way, Panek met Percy Kipapa, who was a source for Gaijin Yokozuna because he had lived and trained with Rowan for seven years in Japan.

“I’d met Percy’s mom years ago when I was a grad assistant at UH Mānoa and he brought me to Waikane to look at a used car he was selling,” says Panek. “I next saw her in the reception line at Percy’s funeral over four years later.”

At the funeral, Kipapa’s mother remembered Panek and told him, “Someone should have written a book about Percy, but now it’s too late.”

“Many of us were angry at the circumstances surrounding Percy’s murder,” says Panek. “Subsequent research revealed that far more was involved than the man who actually stabbed Percy. Mainly, Hawai‘i’s rush to develop land for outsiders at the expense—indirectly, but there is certainly a correlation—of Hawaiians like Percy, and even the man who killed him, who is now serving a life sentence in Arizona.”

Big Happiness won the Ka Palapala Po’okela award for excellence in nonfiction this year. The judges described it as follows:

Mark Panek’s masterpiece is a harrowing account of the life and death of a quintessential local boy—Waikāne’s Percy Kipapa. More than this, the book delves deep into the root causes of Kipapa’s eventual slide and murder, shedding a brilliant light on the systemic problems that plague Hawaiians in contemporary society. Part loving tribute to a great friend and man, and part damning look at the long-term cultural failures of “New Hawai‘i,” Mark Panek’s captivating book gracefully weaves together a truly local narrative connecting the death of Percy Kipapa with Hawai‘i’s shady history of unchecked land development, political corruption, the ice epidemic, and the slow erosion of local values.

The book focuses on the life of Percy Kipapa, a man who was so “full of aloha,” that his given sumo name, Daiki, translates into Big Happiness. By inserting himself into the story, Panek allows us to enter into Percy’s world, creating an emotional bond not only with this modern Hawaiian warrior, but with everything that he represents—his family, the ‘āina, and his local, Hawaiian values. At the same time, Panek’s investigative journalism is well-documented and logically constructed, providing the reader with important questions and rationally answering them without making grand speculative claims, culminating in an excellently transcribed and climactic murder trial.

By interlacing detailed investigation and analysis, first-hand experiences, and masterful writing, Mark Panek’s Big Happiness proves to be one of the most socially important and poignant books to come out of Hawaiʻi in recent memory.

“Even more than how they praise the book, I found these words particularly gratifying because of the way they define the value of Humanities scholarship,” says Panek.

Panel also has a newer novel set on O‘ahu’s North Shore. He’s also been asked by UH Press to write a book documenting the end of the sugar era in Hawai‘i. Both projects received support from a Research Relations grant. He also wrote a book chapter on the cultural moves Hawaiian sumo champion Akebono performed as the first non-Japanese to reach the top rank in Japan’s national sport.

Professor Panek teaches a variety of highly interactive writing courses ranging from introductory composition to senior-level courses in creative writing, nonfiction writing, and composition pedagogy. His peer-reviewed scholarship on the unique concerns associated with teaching in Hawai’i has been published in Composition Studies.

The professor takes time to meet individually with every student on every paper—a service he extends to his students for life, whether they are enrolled in future courses with him or not. He tells the story of student Emil DeAndreis, who was in Panek’s English 100 class seven years ago and showed the professor a memoir he’d been working on about his senior year in high school.

“Right then I convinced him to double-major in English,” says Panek. “We worked on the memoir, put him through the paces in our other classes. He in fact helped evaluate an early draft of Big Happiness. He graduated in 2008 and moved back to San Francisco, where he worked as a substitute teacher so he could focus on his writing.”

Since then DeAndreis has had several stories accepted for publication, including one he’d written for Panek’s class, “The Pigs of Hilo,” that won Bamboo Ridge’s Editor’s Choice Award for Best New Writer. This fall, DeAndreis is beginning his first semester in San Francisco University’s Master in Fine Arts program in creative writing, and has just had his first book accepted for publication.

“He’ll be here at the end of the month visiting and will deliver our October Brown Bag lecture,” says Panek.