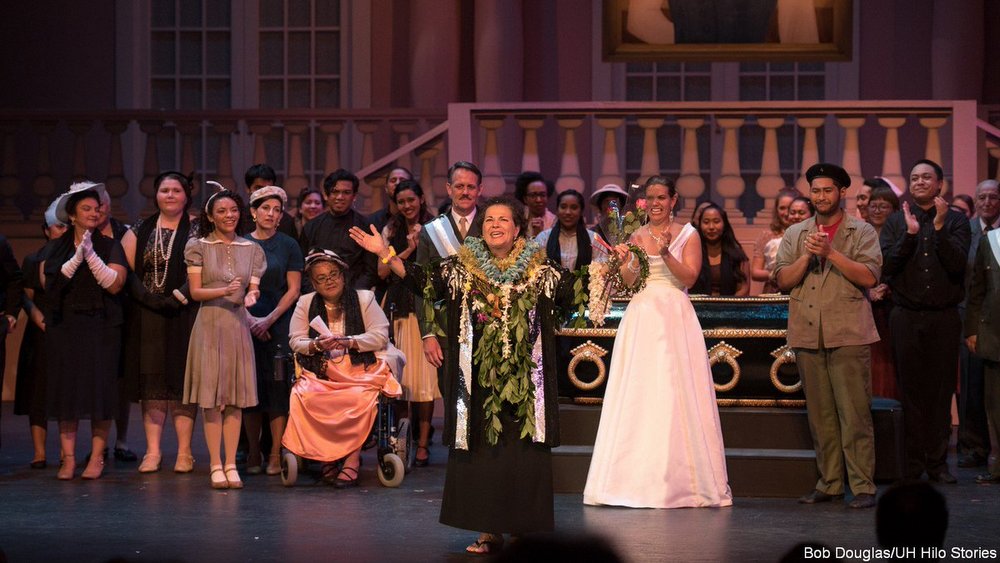 Photo above: Jackie Johnson takes a bow at the end of the play Evita, UH Hilo Performing Arts Center, April 2017. The musical was directed by Johnson in her last production as professor; she retired in May 2017.

Professor Johnson is a performing artist who works with oral history, local drama and literature. Her most significant creative work is adaptations and performances of strong female historical figures of the Hawaiian islands.

Jacquelyn Pualani Johnson is a professor of drama (now retired) who served for many years as chair of the performing arts department at the University of Hawai‘i at Hilo. She specializes in theatre arts, acting, directing, stagecraft, costuming, and makeup. Her most significant creative work is her adaptations and performances of strong female historical figures of the Hawaiian islands.

“Performing these works becomes a huge responsibility because every utterance can transport the audience to deep understandings of themselves, their ancestors, and the forces that shaped momentous moments in our islands’ story,” Johnson says.

She says The Trial of Lili‘uokalani, wherein she created the role of the queen, is especially memorable because of one performance during the state-wide commemoration of the overthrow of the Hawaiian kingdom. A special event was held for students from the Hawaiian Language Immersion Movement. At that time, she, too, was beginning to learn her native tongue along with two of her children who were attending immersion schools.

“The haumana (students) watched the show, then visited with the queen immediately afterward in a question-and-answer session, entirely in Hawaiian,” Johnson says about interacting with the students after the performance while staying in character. “They began with the presentation of ho‘okupu (ceremonial gift), then queried me on my family and my reasons for making the choices I made as queen. It was a stirring journey back into history and I was very affected by the youngsters who were so eager to bring immediacy to their study of Hawaii’s past. And to do all that i ka ‘olelo Hawai‘i (in the Hawaiian language) was deeply moving.”

In the same manner, she says, the performance of Ka‘ahumanu at The Native Theatre Festival of New York City’s Public Theatre also was momentous. (Elizabeth Ka‘ahumanu was a queen regent of the Kingdom of Hawai‘i in the 1800s.)

“The play, written by Honolulu playwright Victoria Nalani Kneubuhl, received a warm reception and engendered riveting discussion with the audience after the staged reading, focusing on Hawai‘i’s political and social history,” she says. “The show served to educate, glorify, and entertain–age-old goals of this art we call drama.”

Johnson says her performances of Isabella Bird over the last five years have been very gratifying. (Bird was an adventurous English traveler, writer, and natural historian of the 1800s.) Many of Johnson’s one-woman events have been on-site where Ms. Bird visited the Big Island in the 1870’s, at Kealapu‘ali and Ka‘anahaha, up-slope on the mountain of Hualalai on the west side of the island. Audiences are taken by four-wheel drive vehicles to the site for the 45-minute show, then spend time in the rarely accessible area.

An assortment of productions that Johnson has directed and/or adapted has been added to the canon of locally-oriented works:

Johnson has two productions currently in progress. Vespers at Hanaiakamalama is a one-woman show that Johnson scripted from historical documents and contemporary sources. UH Hilo student Denyse Woo-Ockerman will create the role of Queen Emma in performances in Hilo and on O‘ahu this fall for the Sesquicentennial of the Episcopal Church in Hawai‘i.

Pele and Hi‘iaka is a story-telling performance that Johnson is adapting from the re-telling of the epic Hawaiian myth by Volcano artist Dietrich Varez. Johnson will perform the adaptation as part of the UH Hilo Performing Arts Center season offerings in spring 2013.

Johnson says her professional goal for the future continues as before: exposing UH Hilo performing arts students to a range of drama from the various genres available, including classical theatre, musicals, contemporary productions, and avant-garde works.

“This is important because of UH Hilo’s isolation,” she says. “The Performing Arts program is the locus for discovery in all these areas.”

Johnson plans an on-going study of trends in the field, uncovering new scripts, and shaping re-inventions of older scripts that will bring vitality and relevance to each performance. In this fashion, she says, students will continue to develop a wide-ranging appreciation for the myriad creative efforts that have shaped the art of performances for generations.

“My personal goal of continuing to bring oral history to life helps me to center on humanities issues on the Big Island of Hawai‘i and in the state of Hawai’i,” she says. “I hope to be the pebble in the pond, sending waves of awareness throughout our island home.”