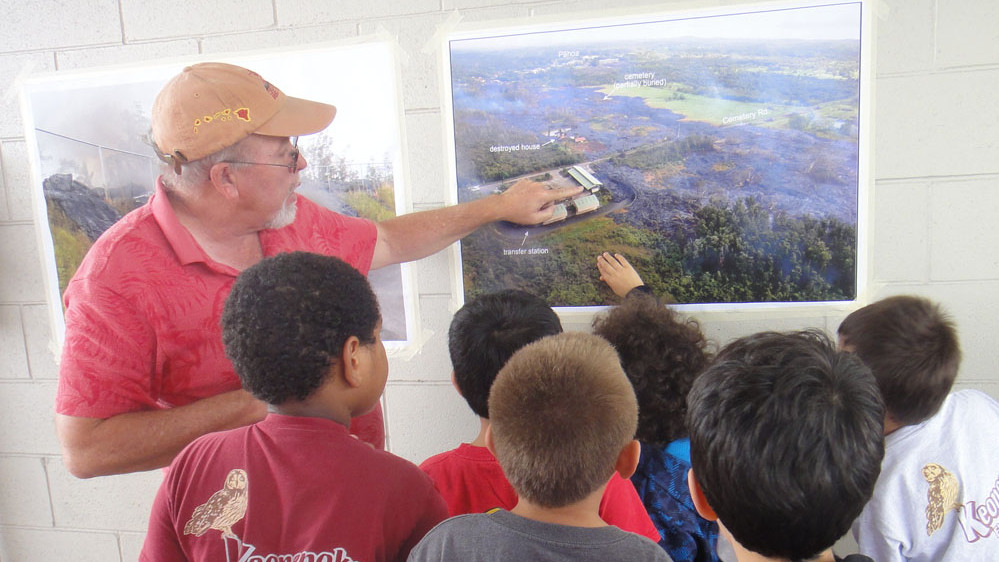 Photo above: Ken Hon, UH Hilo professor of geology, explains the lava flow to a group of school children during the 2014 lava flow in Pāhoa. Photo by Darcy Bevens, CSAV.

Professor Hon specializes in volcanology, petrology and mineralogy. His research interests concentrate on basaltic volcanoes in Hawai‘i and large ash-flow caldera eruptions. He specializes in the mechanics of pahoehoe lava emplacement.

Kenneth Hon, professor of geology and volcanology at the University of Hawai‘i at Hilo, specializes in volcanology, petrology and mineralogy. Hon has studied volcanoes in Hawai‘i, the continental United States, and Russia. His research interests concentrate on basaltic volcanoes in Hawai‘i and large ash-flow caldera eruptions. He also teaches courses in physical geology, geology of the Hawaiian islands, mineralogy, and petrology.

“I’m probably best known for my work on the mechanics of pahoehoe lava emplacement, but all lava flows have a special place in my heart,” he says. “I love trying to gently coax a volcano’s story out of the rocks and minerals. But if that doesn’t work, grinding them to bits and torturing them in hot furnaces and under electron beams is kind of fun, too. One way or the other, they eventually talk and say some pretty interesting things.”

Prior to coming to UH Hilo, Hon worked for 15 years at the U.S. Geological Survey in the Volcano Hazards Program, including three years at the Hawaiian Volcano Observatory.

“During my tenure at HVO, the town of Kalapana was overrun by lava and I was intimately involved with monitoring the progress of lava flows and evacuating residents,” he says. “This experience had a profound effect on me and made me much more interested in making science more applicable to people.”

Hon makes educational films about volcanic eruptions on Hawai‘i Island. He’s part of a team of filmmakers at Volcano Video Productions, where he narrates, shoots, edits, and writes scripts for videos.

The films are shown in the theater at Hawai‘i Volcanoes National Park. A lot of the footage is used in many different TV programs on the major networks, Discovery Channel, Learning Channel, and others, as well as at a number of museums including the American Museum of Natural History.

Hon also conducts geoarchaeology research. In 2003, he teamed up with UH Hilo anthropology professor Peter Mills as investigators on a Major Research Instrumentation Grant from the National Science Foundation. That initial grant was used to found the UH Hilo Geoarchaeology Laboratory to specialize in non-destructive analyses of basalt and volcanic glass artifacts from the Pacific using an Energy Dispersive X-Ray Fluorescence spectrometer that allows rapid study of the material without any damage to the artifacts. The EDXRF is used to detect and record the geochemical “fingerprints” of the stone tools that prehistoric Hawaiians quarried from various sites, and tracks the extent to which that material was traded throughout the islands.

The ARL SEMQ is running the most recent version of Probe for Windows analytical software, which is fully integrated with image analysis software and hardware from SIS. It is capable of quantitatively analyzing spots of 1-2 microns and can also produce backscatter electron and x-ray element maps.

The microprobe is housed in the UH Hilo Geoarchaeology Laboratory along with the EDXRF, which is capable of analyzing whole rocks. Both instruments are wired to the adjacent teaching laboratory and can be used by students as part of geology and archaeology courses.

“We are the only undergraduate liberal arts college in the U.S. with our own microprobe,” says Hon.

In the video below dated Sept. 29, 2012, volcanologist Ken Hon and anthropologist Peter Mills teach students  in a UH Hilo volcanology class, along with visiting students from Stanford University, how to collect data in the field with a thermocouple and radiometer. This is a Kilauea lava flow on Hawai‘i Island, high up on the pali (cliffs). Note: there is no narrative in this video.

Prof. Hon received his bachelor of science in geology and doctor of philosophy in geology from the University of Colorado.

Professor Hon in the news