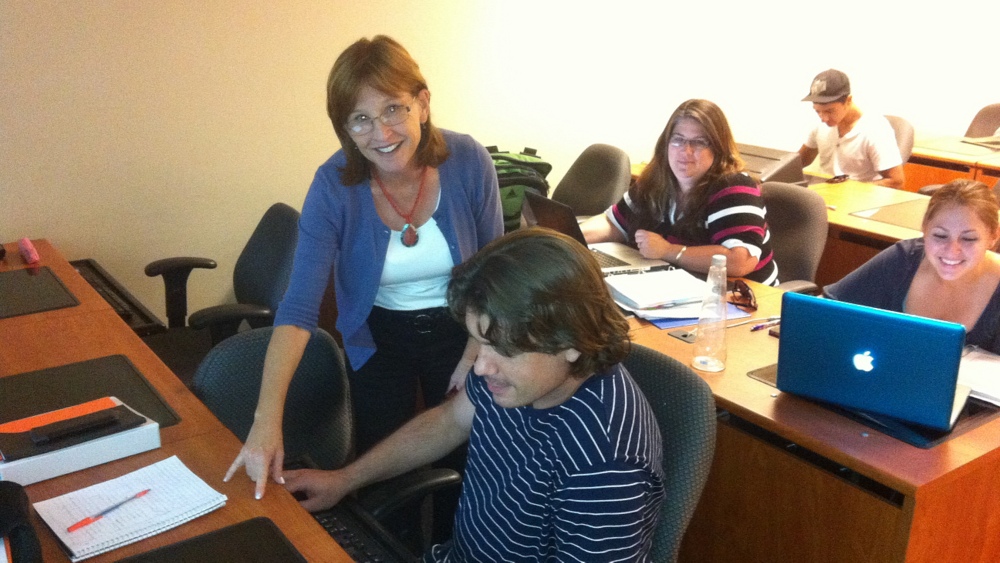 Professor Furumo researches virtual work teams. Her research shows that it is harder to develop trust in virtual teams than in traditional face-to-face team settings.

Kimberly Furumo, professor of management information systems, joined the University of Hawai‘i at Hilo faculty in 2005. Her main area of research focuses on the difficulties of working in virtual work teams. She considers her findings related to team members who withhold effort, called “free-riding” or “social loafing,” or desert the team as her most significant contributions to the literature.

“Virtual teams, or teams that are geographically dispersed and meet via information and communications technology, are becoming more common in the workplace,” says Furumo. “My research is grounded in the work groups theory base and utilizes knowledge from the social psychology area. Specifically, I focus on the constructs of trust, group cohesion, and conflict management.”

First, communication often takes place asynchronously or at different points in time, and it is more difficult because of the lack of media richness. In other words, she says, subtle gestures, body language, and voice tone and inflection are often missing in the virtual world. This increases the likelihood that conflicts will occur and that communication will break down.

In addition, many teams are composed of members from different countries and cultural backgrounds in which customs and modes of communication may be quite different.

Furumo’s research shows that it is harder to develop trust in virtual teams than in the traditional face-to-face team setting. Trust, she says, impacts the relationship between team members and higher levels of trust lead to lower transaction costs. Individuals who trust each other feel less compelled to monitor or double check the work completed by others.

“Trust, or the willingness of one party to be vulnerable to the actions of another party, impacts human interaction,” she says. “A lack of trust exists when one party does not have faith in the competencies of another or questions the motivation of the other to take some promised action.”

Furumo says her findings on free riding are her most significant contribution to the literature.

“Free-riding in teams, or social-loafing as it has also been called, refers to the idea that individuals may be more inclined to withhold effort if they believe their actions cannot be individually identified and monitored,” she says. “For the past sixty years, psychological studies have observed and identified this phenomenon in face-to-face work teams.”

Furumo has expanded on this knowledge area by comparing free-riding in face-to-face and virtual teams. She has authored several research articles on the subject published in the Communications of the ACM, Journal of Computer Information Systems, the International Journal of Human Resources Development and Management, and the Journal of Information, Information Technology and Organizations.

One group, that she titles the “deadbeats,” involves individuals who believe they can mask their individual efforts and therefore decide to reduce work levels.

A second group, she titles “deserters,” and these individuals make a decision to leave the group. This may be due to the fact that they become frustrated with the virtual team format and feel they cannot have an impact. Deserters were more likely to exhibit an avoidance style of conflict resolution suggesting that when problems arose they tended to avoid them.

“Generally, trust and group cohesion are lower in virtual teams while conflict tends to be higher,” says Furumo. “Conflict that is related to task may be beneficial because it allows members to consider different points of view. However, conflict related to personal relationships can be devastating to the work of the team.”

Furumo found that leaders with a supportive style of leadership, in which they are concerned about team members, encouraged more participation and greater levels of trust than commanding leaders who are interested only in task.

Furumo says she is interested in learning more about virtual teams so that she can offer opportunities to her business students.

“Our students are entering a world where they will be working with and interacting with people in different countries and time zones,” she says. “If I can provide them with an opportunity to do this in the safety of the educational environment, they will be more prepared for what awaits them in the work world.”

Furumo has arranged for her students to work in the virtual environment with students in the countries of Jordan and Malaysia. Students report that these experiences have been educational although they have been difficult. For example, both countries are predominantly Muslim and Furumo’s students are sometimes surprised that Muslim students are not available on the Friday and Saturday before an assignment deadline because of religious obligations.

Other difficulties identified by the UH Hilo students were difference in time zones and the limited English spoken by students in other countries.

“In the past, students have been able to read about these difficulties in a textbook, but now they can fully experience them and develop strategies for dealing with the difficulties,” says Furumo.