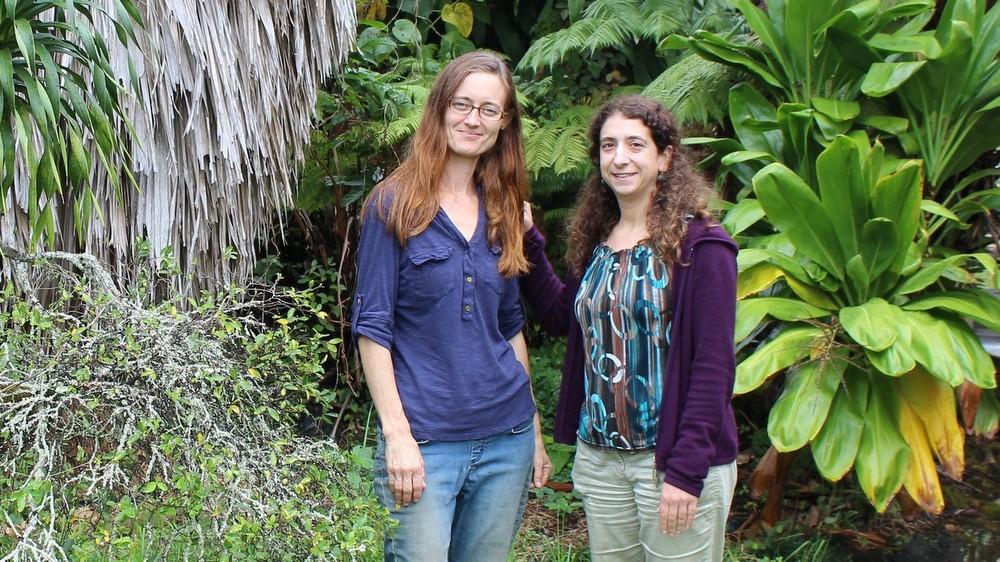 Professor Ostertag is a tropical forest ecologist whose research interests revolve around understanding how tropical forests are structured and how tropical ecosystems function. Specifically, she is researching Hawaiian lowland wet forests.

Becky Ostertag is a professor of biology at the University of Hawai‘i at Hilo, and affiliate graduate faculty in the Ecology, Evolution, and Conservation Biology Program and Department of Botany at UH Mānoa. She is a tropical forest ecologist whose research interests revolve around understanding how tropical forests are structured and how tropical ecosystems function. She’s worked in both Latin America and Hawai‘i. Ostertag’s current projects include:

Ostertag’s work in lowland Hawaiian forests has shown that although this forest type is heavily influenced by invasive plant species, they still contain native plants—an important component of biodiversity.

“Other scientists’ work on birds has shown the same thing—native birds can use lowland wet forest and thus this habitat is an important reservoir of native biodiversity,” says Ostertag. “But Hawaiian lowland wet forest or LWF is disappearing fast due to land clearing or being more degraded due to the influx of more invasive species. Our work has shown that it is possible to do restoration in these degraded lowland forest habitats.”

Ostertag and her research group work with grants from the Department of Defense and the National Science Foundation. Her work also has been funded by NASA, the UH Hilo Seed Money Grant program, and Hawai‘i EPSCoR funds.

Ostertag says she and her research team have learned that Hawaiian LWF are not a lost cause. With management, she says, weeding can be done and native seedling recruitment can be encouraged—if there is still a native canopy.

“But we also learned that the type of intensive management required is not feasible on a large scale, and thus new approaches are needed,” she says. “This realization led us to the hybrid ecosystem idea, that in LWF we can develop new forests that are mixtures of native species and non-native species that are not invasive, but that provide important ecosystem services such as shading out invaders or providing habitat for birds. We envision combining native forests with many of the Polynesian canoe plants, and thus will be creating hybrid ecosystems that have multiple uses.”

Ostertag says she looks at the hybrid ecosystem project as a proof in concept.

“We are going to learn a tremendous amount,” she says. “It’s a fantasy football-type approach. We are using species resource-use characteristics, what ecologists call ‘functional traits’ to choose our species or ‘players.’ By creating different mixtures of species, we are developing several different types of experimental treatments or ‘teams,’ and we want to see which team works best in fulfulling our objectives of carbon sequestration, resisting invasion, and supporting native biodiversity.”

“If our approach works, we feel it will have broad applicability in restoration, not just in Hawai‘i but anywhere where the approach can be followed. Ideally, I’d love to see some areas in east Hawai‘i now filled with invasive trees be modified into those new hybrid ecosystems, where native trees flourish but so do other useful plants like ulu and mango.”

In addition to her research activity, Ostertag teaches a variety of courses in ecology, natural history, conservation, biostatistics, and theory and methods, among others. Many of her students participate in her field work and research. She’s also involved in program development. She co-wrote the National Science Foundation TCUP STEM grant for UH Hilo, which evolved into the Keaholoa Program.

Ostertag is highly involved in the NSF EPSCoR initiative for the state of Hawai‘i, which equipped an environmental analysis facility at UH Hilo; was co-investigator of the HIPPNET project, establishing a permanent forest plot network in Hawai‘i; and is team leader for the Ecosystem Dynamics and Response Team.

Ostertag was awarded the UH Hilo Chancellor’s Award for Scholarly/Creative Activities in 2011, and the UH Board of Regents Excellence in Teaching Medal in 2005. She received the Murray F. Buell Award, Honorable Mention for Best Student Talk, Ecological Society of America Meeting, in 1997, and a College of Liberal Arts and Sciences Fellowship, University of Florida in 1996.

Ostertag received her bachelor of arts in biology, with honors, from Carleton College, Northfield, MN, and her doctor of philosophy in botany from the University of Florida, Gainesville.