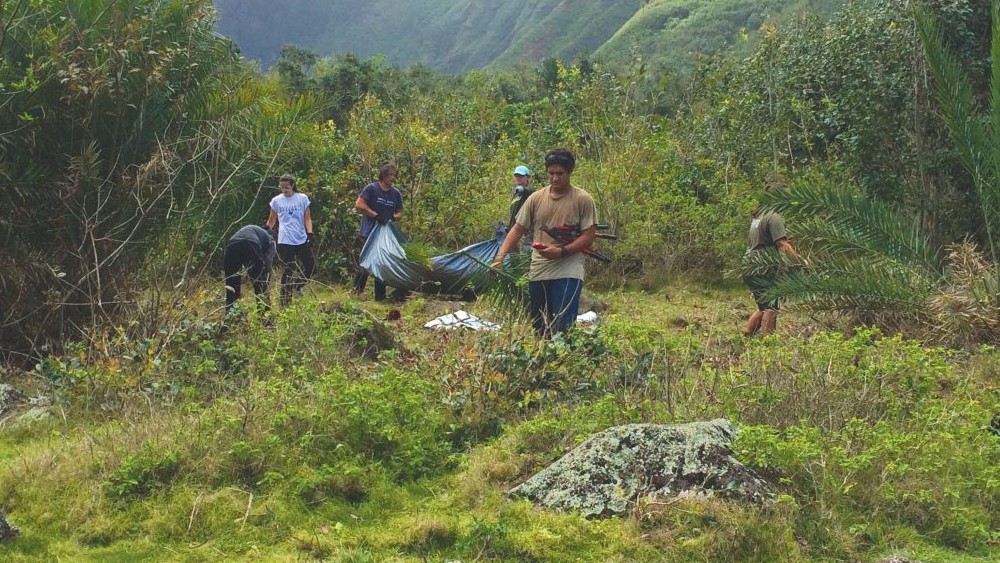 Above, service-learning volunteers under the tutelage of Kerri Inglis remove invasive vegetation from Moku Puakala, a historic and mostly unmarked cemetery at Kalawao, Kalaupapa. Photo by Kerri Inglis.

Professor Inglis researches the sense of community in Molokai leprosy settlement. She has devoted her career to studying the history of leprosy in Hawai‘i with focus on the history of kama‘āina who lived on the peninsula of Kalaupapa, Molokai.

Kerri Inglis, professor of history at the University of Hawai‘i at Hilo, specializes in research and teaching in the history of health, disease, and medicine, especially as it pertains to Hawai‘i and the Pacific, within a global context. She has devoted her career to studying the history of leprosy in Hawai‘i and done extensive research on patients’ experience at Kalaupapa peninsula on Molokai* pre-1900. She has written a book on the topic, Ma‘i Lepera: Disease and Displacement in 19th Century Hawai‘i (2013, UH Press), which earned honorable mention for Excellence in Hawaiian Language, Culture, and History at the 2014 Ka Palapala Poʻokela Awards.

The history of leprosy on Molokai

In 2012, Inglis conducted a socio-cultural study on the history of the kama‘āina (native residents) who lived on the peninsula of Kalaupapa and surrounding areas on the island of Molokai that now constitute Kalaupapa National Historical Park.  These kama‘āina of the ahupua‘a of Waikolu, Kalawao, Makanalua, and Kalaupapa were displaced with the establishment of the leprosy settlement on the peninsula between the years 1865-1900.

“I am also charged with developing a database prototype that will eventually make all of this research available to others who are interested in this history. Collected documents include Board of Health records, letters, Hawaiian and English newspaper articles, and more,” she says.

The final product of this study was presented as a comprehensive report to the National Park Service.

Inglis includes students in all her research work. Students’ duties include assistance with literature review, archival research, report preparations, translation of Hawaiian language materials, and summary report preparation, among other activities. One assisted with transcribing and translating letters that were sent to the Board of Health in French.

Student assistants who worked alongside Inglis during the kama‘āina project (2010-2012) included:

The research resulted in at least one paper accepted for publication: “Nā hoa o ka pilikia (friends of affliction): a sense of community in the Molokai leprosy settlement of 19th century Hawai‘i,” (2013, Journal of Pacific History).

Inglis received her bachelor of arts in history from Brigham Young University–Hawai‘i; master of arts from the Institute for the History and Philosophy of Science and Technology, University of Toronto (emphasis on the history of medicine); and doctor of philosophy in history from UH Mānoa.

*Prof. Inglis does not use an ‘okina or macron in the word Molokai. “I am using the spelling Molokai rather than Moloka‘i—unless quoting directly from other sources—throughout this work as has been recommended by the kūpuna (elders) of Molokai,” says Inglis. See the opening “Note” in Harriet Ne with Gloria L. Cronin’s, Tales of Molokai: The Voice of Harriet Ne (Lā’ie: Institute for Polynesian Studies, 1992), vi.