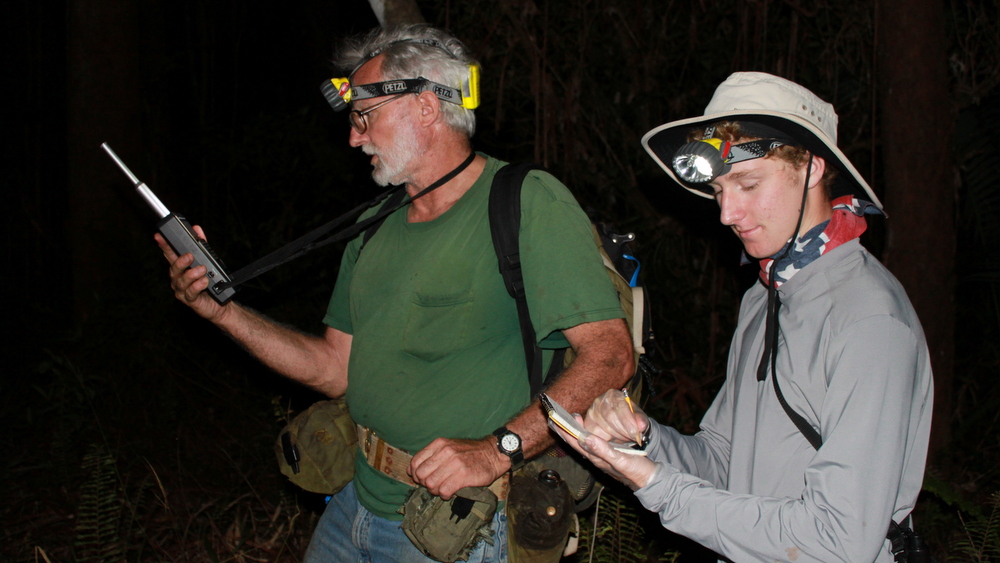 Professor Mautz’s research interests are in animal physiological ecology and environmental toxicology. He studies the coqui frog invasion in Hawai‘i and lizards in California.

One set of projects concerns the dynamics of the invasion of Hawai‘i by a Puerto Rican treefrog, Eleutherodactylus coqui.

“Coqui frogs in Hawai‘i can reach population densities three times those in their native habitats in Puerto Rico,” says Mautz. “This is likely the result of the frogs having very few predators or other competitor species of frogs in Hawai‘i.”

Underground retreats found in the younger substrates of southern Hawai‘i Island make it more difficult to control the frogs compared to older, well developed soils on O‘ahu, Maui, and Kaua‘i, he says.

“Forests with a‘a lava flow substrates offer the frogs underground shelter by day,” says Mautz. “The frogs’ diet tends to be leaf litter arthropods that they encounter under ground, and the sub-surface shelter makes it difficult to reach the frogs with control spraying.”

Mautz says his research has benefited local interests in advancing the understanding of why it is too difficult to continue to try to eradicate or control populations of frogs by spraying infested forests with citric acid or other control agents.

In a National Science Foundation supported collaboration with Becky Ostertag, Flint Hughes, and Paul Klawinski, Mautz has investigated the impact on Hawaiian forest ecosystems of dense populations of the coqui frogs layered onto the earlier invasion of the nitrogen-fixing and forest-transforming albizia tree, Falcataria moluccana.

“We have come to understand that in lowland Hawai‘i habitats where much of the forest plants and animals are exotic species, the frogs are not having a large adverse ecological impact on the ecosystem,” he says. “This was a surprise, given how dense the populations of frogs can be.”

Mautz says the main and immediate problem with the frogs is the noise nuisance, but a potential long-term problem with them remains that they provide an abundant food resource for other potential invasive species, such as snakes.

Graduate students often work with Mautz on his research. For example, Raymond McGuire studied frog population dynamics in different forest types; Miya Warrington analyzed the sonic field of the coqui chorus in relation to environmental variables and population density; Rogelio Doratt researched the mechanism of frog sensitivity to chemical exposure of the skin; and Shenandoah Marr completed a comparative study of coqui parasite loads between native populations in Puerto Rico and introduced populations in Hawai‘i.

The island night lizard is found on only three of the California islands, all heavily damaged by exotic mammalian herbivores like feral goats, pigs, and rabbits as well as a history of sheep and cattle ranching. Xantusia riversiana is sensitive to ecological disturbance, because it has a small distribution and exceptionally low growth and reproductive rates. Goats and pigs have recently been removed from San Clemente Island, and Mautz is studying the lizard’s response to vegetative recovery and potential increased incidence of wildfires and weed growth on the island.

Mautz received his bachelor of science in biological sciences from the University of California, Irvine, and master of science and doctor of philosophy in environmental physiology from Cornell.