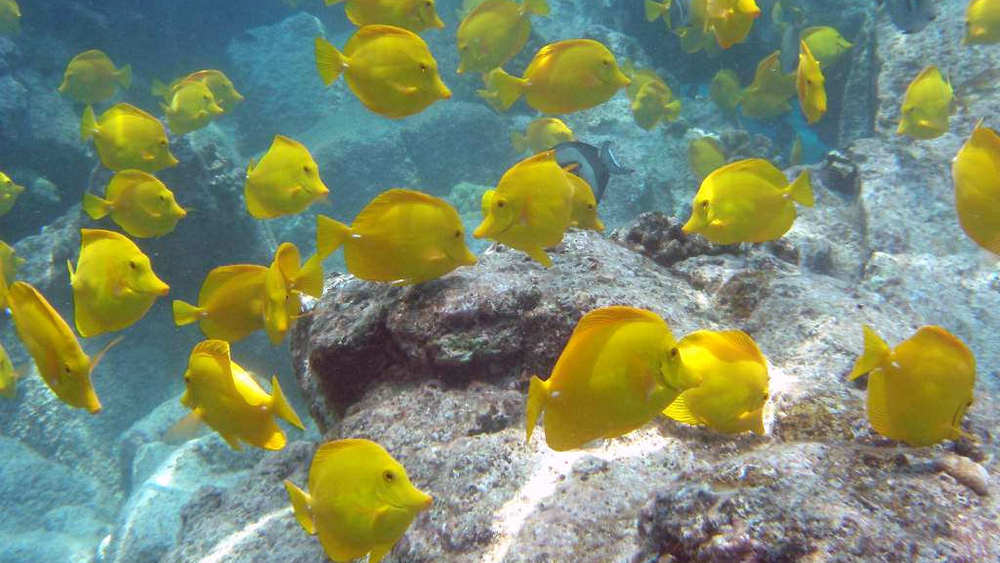 Jim Beets, professor of marine science at the University of Hawaiʻi at Hilo, is a marine field ecologist who focuses on fish and fisheries ecology. He has extensive research experience in coral reef community ecology and tropical marine fisheries.

Since his arrival at UH Hilo in 2004, Beets has initiated research on recruitment patterns of corals and reef fishes around Hawaiʻi Island, resource utilization projects using geographic information system (GIS) technology, and inventory projects within national parks units. He is principal investigator of a National Park Service (NPS) grant to investigate the role of herbivory on nutrient responses in two marine parks, Koloko-Honokohau National Historic Park (NHP) in Kona and Kalaupapa NHP on Molokai. He also has four other NPS projects in Hawaiʻi and the Caribbean. He has published numerous scientific papers and reports on reef ecology.

In some of his research, Beets and marine ecologists from Oregon and Washington discovered for the first time that fish stocks can be replenished by tiny fish larvae originating from marine reserves more than 100 miles away. Their research, conducted in Hawaiʻi and published in 2010 in the scientific journal PLoS One, also highlighted the ability of marine reserves to rebuild fishery stocks in areas outside the reserves.

“This study should help answer some of the questions about the ability of marine reserves to help rebuild fisheries,” says co-author Beets. “It should also add scientific precision to the locating of reserves for that purpose, which is just one of many roles that a marine reserve can play.”

The findings were based on the creation of nine marine protected areas along the Big Island’s Kona Coast in 1999 in response to the alarming decline of a tropical fish known as yellow tang, which threatened an important species in the aquarium trade industry. In just 10 years, the newly created marine reserves helped reverse the fortunes of the fishery which had been facing declines.

Following field research in 2006, the scientists performed genetic and statistical analysis on nearly 1,100 juvenile and adult fish, which found evidence that several healthy juvenile fish were spawned from parents up to 114 miles away, including some from protected marine areas.

Scientists already knew that marine reserves will grow larger fish and that some will spillover and leave their specific area. But the Hawaiʻi study breaks new ground by providing the first direct observation that successful marine reserves can potentially sustain fisheries a large distance beyond their borders.

Beets believes the significance of the study’s findings go beyond addressing lingering skepticism about marine reserves.

“The identification of connectivity of fishes between distant reefs on the Island of Hawaiʻi demonstrates that human coastal communities are also linked,” Beets says. “So management in one part of the ocean affects people who use another part of the ocean.”

In another research project conducted in early 2011, Beets and colleague Alan Friedlander, adjunct associate professor in the Department of Zoology at UH Mānoa, were members of an expedition to tag Salas y Gómez’s Galapagos sharks. The expedition began near Easter Island, roughly 2,000 miles northwest of Santiago, Chile.

From Friedlander’s blog at National Geographic:

We were able to find a few sharks large enough to hold a pop-off satellite tags. We program the tag to detach from the shark and float to the surface at various intervals: two months, four months, and six months after we attach them to the sharks. When they pop off, they transmit information to us via satellite tracking where the sharks have gone. A light sensor on the tag uses angles of the sun to give us some idea of latitude and where the shark traveled.

The sharks’ migration patterns have significant implications for management of the new marine park. If they’re moving between Salas y Gómez and Easter Island, then the protected area may have to be expanded, it may not be large enough. If sharks go outside, there are international implications. For example: One of the Galapagos sharks we tagged during the Cocos Island, Costa Rica expedition in 2009 ended up in Colombian waters.

Beets also provides administrative and management support on the ENDER component of the Hawaiʻi EPSCoR grant, which is the federally-funded Experimental Program to Stimulate Competitive Research program aimed at strengthening the research infrastructure of the entire state of Hawaiʻi. His responsibilities are primarily reporting, planning, coordination with other team leaders and community advisory groups, developing and reviewing strategic plans and budgets, organizing meetings and research retreats, and reviewing research status. His own research with the EPSCoR grant is focused on environmental effects, particularly nutrient delivery by submarine groundwater discharge, on benthic/coral reef community structure and function.