A presentation focused on seeking and accessing Hawaiian knowledge through library and archival collections was held on Tuesday, September 24, 2019. The presenter, Annemarie Paikai shared her experiences and practices as a Native Hawaiian scholar. Paikai's previous experience on a research team which recently published, "E Naʻauao Pū, e Noiʻi Pū, E Noelo Pū: Research Support for Hawaiian Studies," provided her with an informed view on the important kuleana we take on when delving into the knowledge repositories of our kūpuna.

Updates to the History Department Lounge

UCB 333 has recently undergone changes and updates. On September 21st and 22nd, history club students painted and rearranged the department lounge. In addition to receiving a paint job, the lounge in now equipped with new tables, the shelving has been reorganized, and a new printer has been put in. If you need a book for research, would like to scan a library book, or just need a place to study please visit the newly updated lounge. 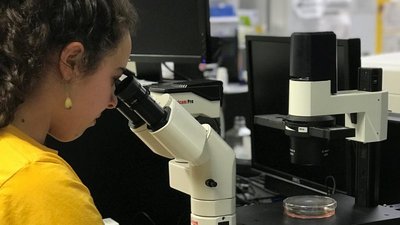 Pharmacy student, Tifaine Crivello has been working with Dr. Inglis to incorporate Hawaiian traditions with her pharmaceutical research. Tifaine Crivello hopes that applying tradition and culture to modern medical practices will help preserve and honor her heritage. Please read the full article to learn more about Crivello's research by visiting the UH Hilo Stories webpage. 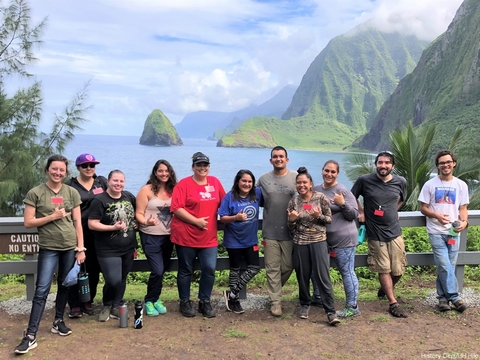 In early November 2018, a group of students studying history at the University of Hawaiʻi at Hilo traveled to Kalaupapa, a historical community on Molokai where patients with Hansen’s disease, also known as leprosy, were quarantined at the peninsula over a 103 year period. Please read the full article to learn more about their service learning trip by visiting the UH Hilo Stories webpage.

In early November 2018, a group of students studying history at the University of Hawaiʻi at Hilo traveled to Kalaupapa, a historical community on Molokai where patients with Hansen’s disease, also known as leprosy, were quarantined at the peninsula over a 103 year period. Please read the full article to learn more about their service learning trip by visiting the UH Hilo Stories webpage.

Other writing awards in the program’s focus areas -- with $50 awards -- went to the following students:

The annual History Senior Symposium (PDF) marks the culmination of our history majors' journey toward graduation. The seniors enrolled in this course have spent at least a year immersed in the research for their senior thesis paper -- a 30+ page paper meant to draw upon their preparatory course work in their focus area and methods courses, as they apply their skills in research, analysis, and communication (written and verbal) of an historical topic of their choosing. The formal senior thesis journey begins in the fall semester in "HIST 490: Historiography & Research Methods", and then culminates in the spring semester in "HIST 491: Senior Thesis" -- leading to the symposium.

A variety of topics are presented each year. This is a result of our students being able to focus their history degree on one of five regional areas: E. Asia, Europe, Hawaiʻi, Pacific, or U.S.

Prof. Kerri A. Inglis Invited to Speak at Damien Center in Belgium

Associate Professor, Kerri A. Inglis , was invited to speak on the history of Hansenʻs Disease in Hawaiʻi at the Damien Center in Leuven, Belgium. Inglis visited the crypt where Damien is buried in Leuven, his birthplace in Ninde, and where he was baptized in Tremalo, before delivering her presentation "Maʻi Hoʻokaʻawale ʻOhana--the disease that separates family."

Nine students accompanied Prof. Kerri A. Inglis on an annual service-learning trip to Kalaupapa, Molokai, in early November. The students gained direct knowledge of the history of Hansenʻs disease in Hawaiʻi and the role of isolation in that history. Additionally, they learned of the wahi pana (sacred, storied places) and oral traditions of the peninsula, while they helped remove invasive species and cleaned cemeteries, cleaned settlement structures, and helped remove trash from beach areas.

In Fall 2014, Prof. Kerri Inglis ’s public history in Hawaiʻi class spent their semester visiting, researching, and producing materials related to wahi pana (storied, sacred places) of Hawaiʻi island.Their efforts culminated in the exhibit “Wahi Pana O Hawaiʻi . . . every place has a story” at Moʻokini Library in December 2014. The exhibit was invited back and is expected to remain through the Fall 2015 semester.Congratulations to our students: Cletus Correia, ʻAlika Guerrero, Ciera Pagud, Kehani Tejada, Sarah Steinbrecher, and Karly Watts.

Due out in the summer of 2015, Associate Professor Michael Bitter ’s article, “Ministers and Favorites in the 1730s: An Analysis of the Dynamic Relationship Between Osterman and Biron Through the Eyes of Foreign Diplomats,” was selected for publication in a book of a collection of articles on Russia’s eighteenth century.

In April 2015, UH Hilo History graduate Evan Matsuyama received an acceptance letter into the prestigious Master of Arts in History program University of Oxford, England. While majoring in History at UH Hilo, Matsuyama earned a 4.0 GPA, was president of the History Club, a member of Phi Alpha Theta, and was selected the student speaker for the Fall 2014 Commencement. Congratulations Evan!

For the seventh year in a row, on Saturday, March 14th, 2015, the UH Hilo History Department, with the help of its student History majors and members of the History Club, hosted the Hawaiʻi Island History Day Competition. History Day is a nationwide event in which middle and high school students compete to move on to state and national competitions. History students from around the Big Island gathered at UH Hilo to present their history projects, including essays, websites, documentaries, displays, and performances.

In the Winter 2015 edition of the journal Ethnicity & Disease, UH Hilo’s History Professor Jeffrey Allen Smith and Psychology Professor B. Chris Frueh collaborated with two scholars from the Baylor College of Medicine in South Carolina to publish “Racial differences in diabetes among Union Forces during the American Civil War .”

In 2014, Associate Professor Michael J. Bitter was invited to contribute a chapter to the recently published The Man Behind the Queen: Male Consorts in History, co-edited by Charles Beem and Miles Taylor and published by Palgrave MacMillan. Dr. Bitter’s contribution, titled “Count Ernst Johann Bühren and the Russian Court of Anna Ioannovna,” argues that Tsaritsa’s favorite played a surprisingly active role in Russian foreign policy decision-making and treaty negotiations in the early 1730s.

In July 2014, Assistant Professor Jeffrey A. Smith , UH Hilo Psychology student Kristi Masuhara, and Professor of Psychology B. Chris Frueh published “Documented suicides within the British Army during the Crimean War 1854–1856 ” in the journal Military Medicine.

In July of 2014, Associate Professor Michael Bitter presented his paper, “Ministers and Favorites in the 1730s: An Analysis of the Dynamic Relationship Between Osterman and Biron Through the Eyes of Foreign Diplomats,” at the Ninth International Conference of the Study Group on Eighteenth-Century Russia , held from July 17th to the 22nd at the Catholic University of Leuven, in Leuven, Belgium. This international conference attracted specialists in Eighteenth-Century Russian history from the United States, Germany, Great Britain, Belgium, the Netherlands, France, Italy, and, of course, Russia. The conference is held every five years to bring together specialists from around the world who present their latest research into Russia’s Eighteenth Century.

On Saturday, March 8th, 2014, the History Department of the University of Hawaiʻi at Hilo, supported by History majors and members of the History Club, hosted the annual Hawaiʻi Island History Day Competition for National History Day .

From March 22 – June 1, 2014, Assistant Professor Jeffrey Smith secured the Smithsonian Institution traveling exhibit “I Want the Wide American Earth: An Asian Pacific American Story” to be displayed at the ʻImiloa Astronomy Center at UH Hilo thanks to the generous funding support from the Dorrance Family Foundation.

Professor Douglas Mikkelson published his article “Dōgen’s Primer on the Nonmoral Virtues of the Good Person ” in the Journal of Buddhist Ethics, in 2014.

Assistant Professor Jeffrey A. Smith published four articles in the New York Times “Disunion” section, a special New York Times series to commemorate the 150th anniversary of the American Civil War. The first article, published on March 20, 2013, in collaboration with Professor of Psychology B. Christopher Frueh, was “Minds at War .” The second, on August 13, 2013, was “The Civil War and Hawaiʻi ” (with research assistance provided by UH Hilo students Robert Franklin, Scott Hampe, and Noah Gomes). The third, on November 7, 2013, with Professor B. Christopher Frueh, was “Counting the Costs of the Civil War .” And the fourth, on February 25, 2014, was “Lincoln and the ’Cannibals’ ” (with research assistance by UH Hilo students Samantha Aolani Kailihou and Noah Gomes).

Dr. Michael Bitter received a UH Hilo Research Relations Grant to conduct archival research on secret foreign embassy communications through London intercepted by the British government during the early 1730s. These documents are held in the British National Archives at Kew and represent an alternate source of European government opinion on the major international crises of the day, such as the War of Polish Succession involving Russia, France, and Austria. Dr. Bitter hopes to use these records as sources for his research into the power relationships between major figures at the Russian court during the reign of Anna Ioannovna in the 1730s.

In 2013, Assistant Professor Jeffrey A. Smith was awarded by the Abraham Lincoln Bicentennial Foundation a Programming Grant of $7,500 to help fund the James Oliver Horton Symposium on Abraham Lincoln at UH Hilo and UH Mānoa.

On Saturday, March 2nd, 2013, the History Department of the University of Hawaiʻi at Hilo, supported by History majors and members of the History Club, hosted the annual Hawaiʻi Island History Day Competition for National History Day .

In 2013, Associate Professor Kerri Inglis published with the University of Hawaiʻi Press. Maʻi Lepera attempts to recover Hawaiian voices at a significant moment in Hawaiʻi’s history. It takes an unprecedented look at the Hansen’s disease outbreak (1865-1900) almost exclusively from the perspective of “patients,” 90% of whom were Kanka Maoli (Native Hawaiians). Using traditional and nontraditional sources, published and unpublished, it tells the story of a disease, a society’s reaction to it, and the consequences of the experience for Hawaiʻi and its people.

Professor Douglas Mikkelson published his book chapter “Exemplars for the Moral Education of Beginners in the Religious Life: Aquinas and Dōgen” in Thomas Brian Mooney and Mark Nowacki, eds. Aquinas, Education, and the East – Volume 4 in the Sophia Studies of Cross-Cultural Philosophy of Traditions and Cultures series.

In August 2012, as a result of Assistant Professor Jeffrey A. Smith and Professor of Psychology B. Chris Frueh article on Civil War mental health in the Journal of Anxiety Disorders, a Time editor asked them to write an on-line article about the research for Time’s “Battleland” military section. Smith and Frueh wrote “New Study: U.S. Military Suicide Rate Now Likely Double or Triple Civil War’s .”

In October 2012, Assistant Professor Jeffrey Allen Smith and Professor of Psychology B. Christopher Frueh coauthored an article in the Journal of Anxiety Disorders entitled “Suicide, alcoholism, and psychiatric illness among union forces during the American Civil War .” The article was accompanied by a commentary written by eminent Harvard psychologist Richard McNally applauding the work and stressing the need for doing additional historical research.

Dr. Michael Bitter received a UH Hilo Research Relations Grant to conduct archival research at The British National Archives in London during the summer of 2012. This grant has allowed Dr. Bitter to investigate the foreign office papers of George, Lord Forbes, King George II’s Envoy Extraordinary and Minister Plenipotentiary to the court of Russian Tsaritsa Anna Ioannovna in 1733 and 1734. Forbes’s mission resulted in the signing of the Anglo-Russian Commercial Treaty of 1734, one of Russia’s first major commercial treaties with a Western European power.