Why is Coral Health Important?

Coral reef ecosystems are not only important sources of food and coastal protection, but are also a critical economic resource. Corals, just like other animals, succumb to diseases especially when the environmental and biological stressors around them work synergistically against them.

Efforts to monitor corals have increased over the last decade as coral reefs have been declining around the globe. Unfortunately, the intensity and occurrence of perturbations affecting nearshore environments is projected to increase. A thorough understanding of the dynamics of coral health and disease is necessary to protect and conserve these valuable ecosystems.

Types of Reduced Health and Disease

Bleaching is identified as pale or white tissue and can affect an entire colony or portions of a colony. This condition does not result in tissue loss, just loss of pigmentation. The loss of pigmentation is caused by expulsion of the endosymbiotic dinoflagellates resulting in the white ‘bleached’ appearance. Bleaching is attributed to increased water temperature, however it can be caused by a number of stressors including UV radiation and sedimentation. Bleaching is considered a generalized response to stressful conditions, however it is a strong indicator of coral health because it results in a lack of energy acquisition and can severely reduce the functional capacity of affected corals. Bleaching has been widely observed affecting several coral species throughout the Hawaiian Archipelago. 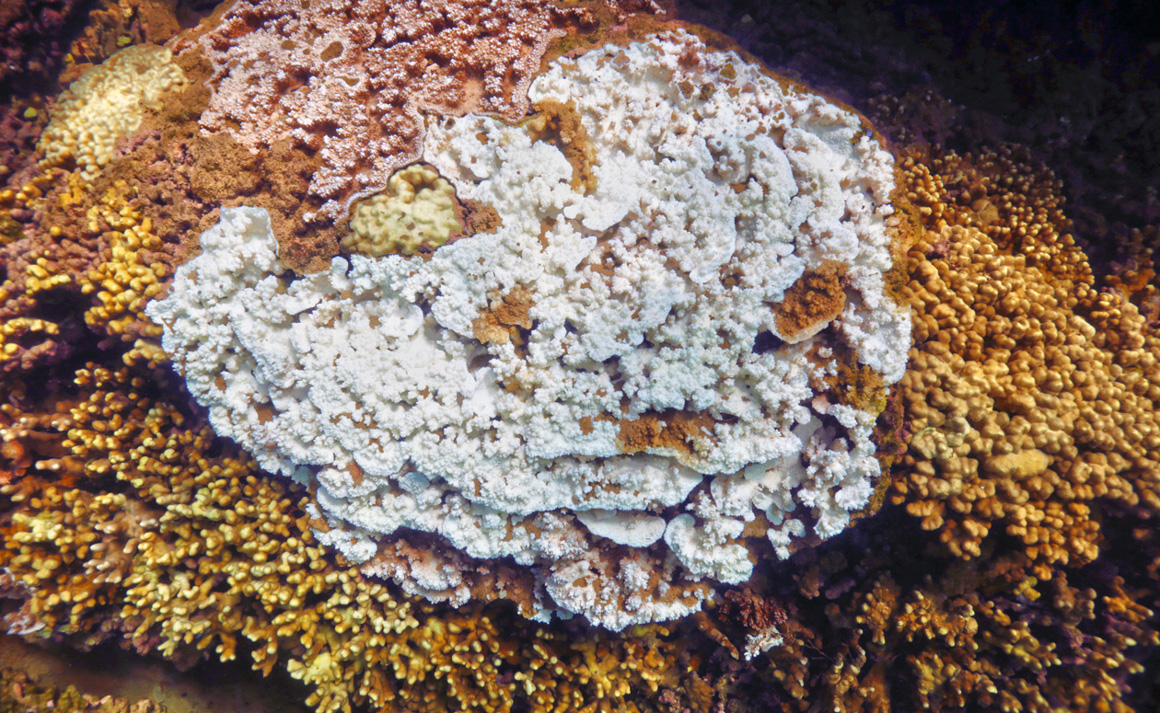 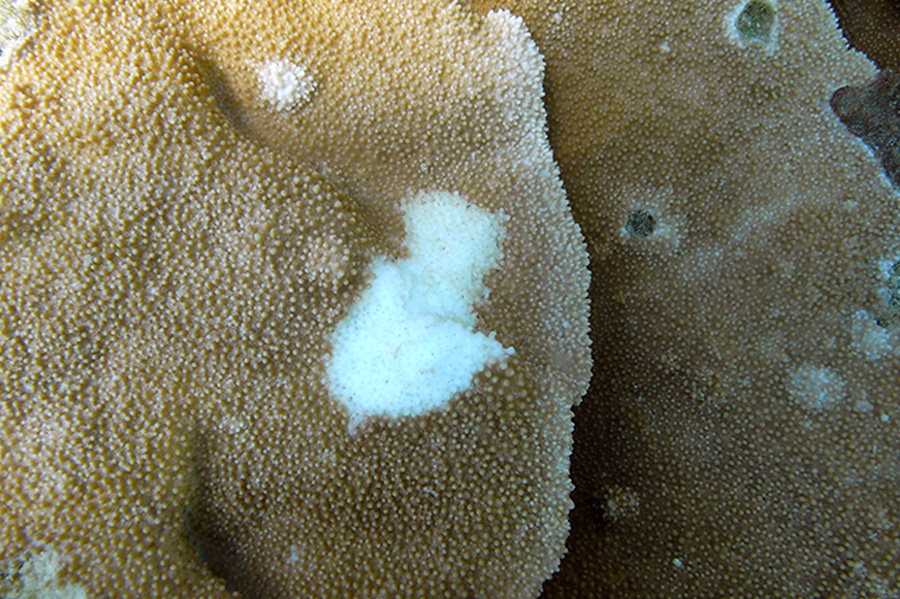 Tissue loss lesions are characterized by rapid loss of tissue resulting in clearly defined denuded skeleton. Over time, filamentous and turf algae will cover the exposed skeleton. There are several documented forms of tissue loss including white syndrome, acute tissue loss, and sub-acute tissue loss. Several other diseases (i.e. black band disease, endolithic hypermycosis, ciliate infection, etc.) result in tissue loss, however, they are characterized by other recognizable signs. Acropora and Montipora coral species are most commonly affected by these lesions. Tissue loss has been recorded at numerous sites throughout the Hawaiian Archipelago.

Growth anomalies are characterized by changes in the typical shape and form of corals. Lesions appear as protuberances associated with irregular skeletal deposition. The protuberant masses can appear pale and have distinct undulating margins and nodular relief. This disease can cause reductions in critical biological functions within affected tissue such as feeding, defense, and reproduction. Growth anomalies have been documented to affect several species throughout the Hawaiian Archipelago. 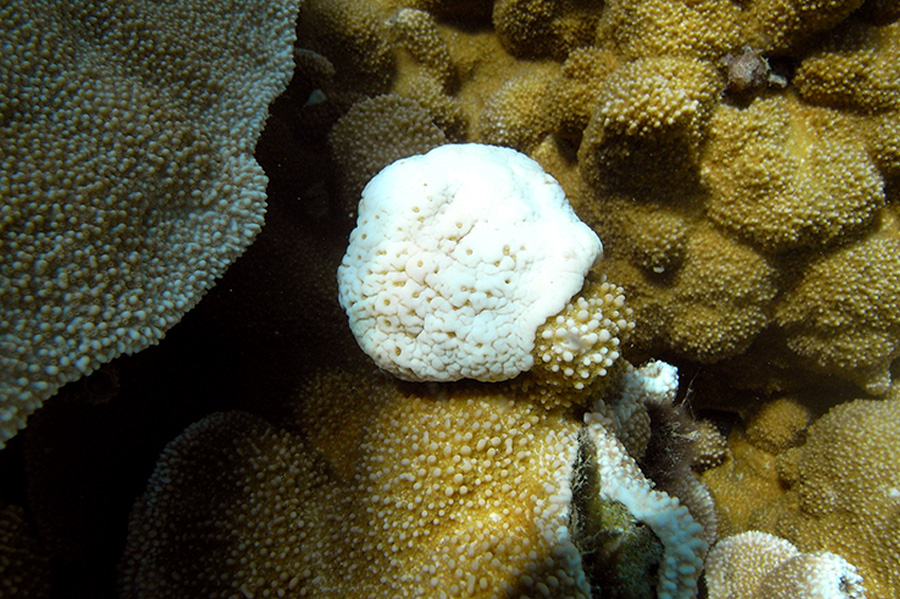 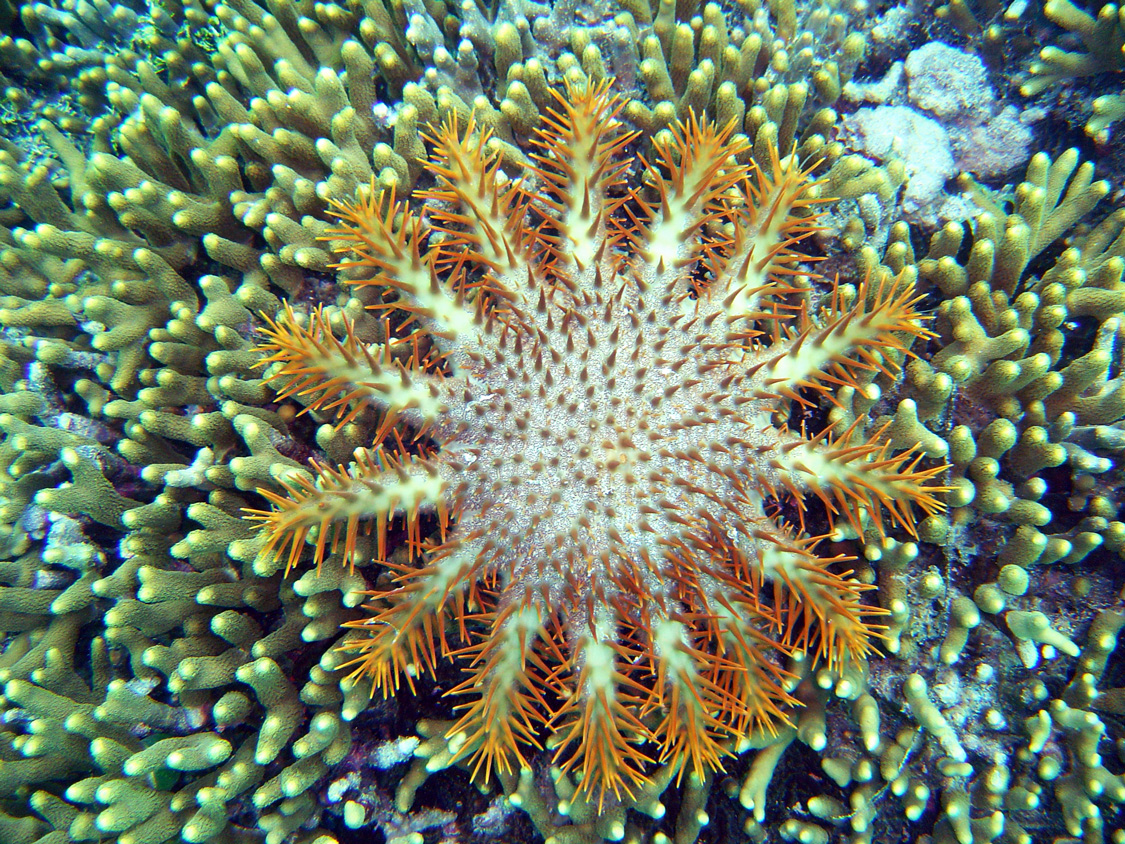 There are hundreds of marine species that feed on corals. Crown-of-thorns starfish prey on hard corals and can cause extensive tissue loss and mortality. There are also many species of corallivorous fish that consume coral tissue and leave behind distinct feeding scars. These scars can be focal or multifocal and have either discrete margins or leave irregular deep scars. Various gastropods also feed on corals and like corallivore fish; they leave behind a variety of scars. Coral predation results in rapid tissue loss leaving behind white denuded skeleton. It is important to be able to identify differences between feeding scars and lesions caused by a pathogen. Coral predation affects several species and occurs throughout the Hawaiian Archipelago.

Algal overgrowth is identified by the presence of alga growing on top of the coral surface. This typically suffocates the coral tissue resulting in tissue loss. This condition can progress rapidly resulting in substantial loss of tissue and even colony death. The tissue bordering the algal growth sometimes appears pink and swollen due to irritation. Algal growth has been shown to be associated with high levels of nutrients. Several species of algae have been shown to affect corals throughout the Hawaiian Archipelago. 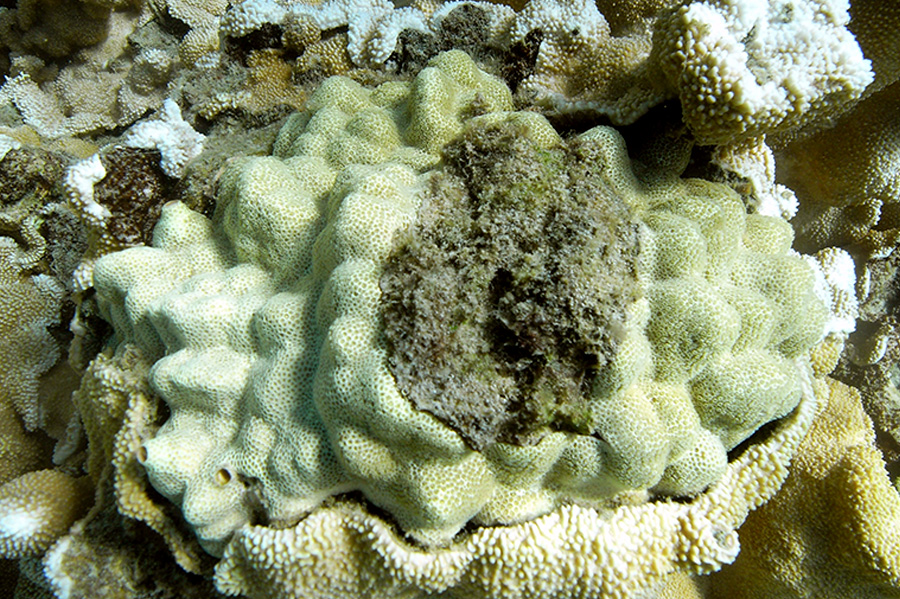 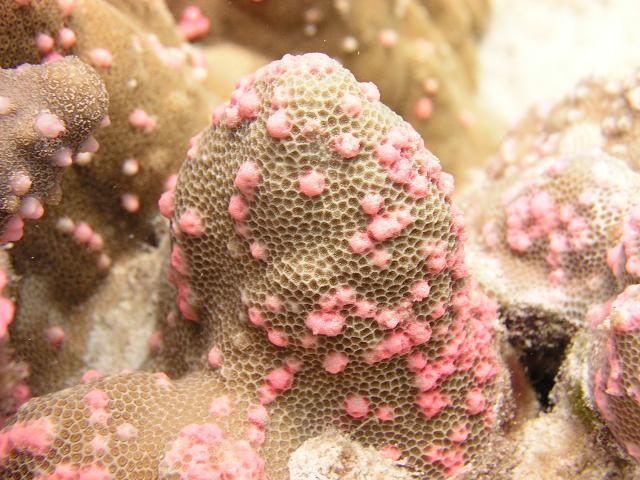 Trematodiasis is identified by pink to pale protuberances that are approximately 5mm in diameter. This pink spots can be either focal or multi-focal on the coral surface. Trematodiasis is caused by an encysted parasitic digenetic trematode. Porites corals are the main host for this condition. Colonies affected by Trematodiasis have been observed throughout the Hawaiian Archipelago.

Endolithic hypermycosis is identified by dark discoloration occurring in irregular patterns on the coral surface. This condition most commonly affects Porites, Pavona, Leptastrea, and Cyphastrea corals. The discoloration is due to endolithic fungal proliferation within the coral tissue. This condition is rare but has been reported throughout the Hawaiian Archipelago. 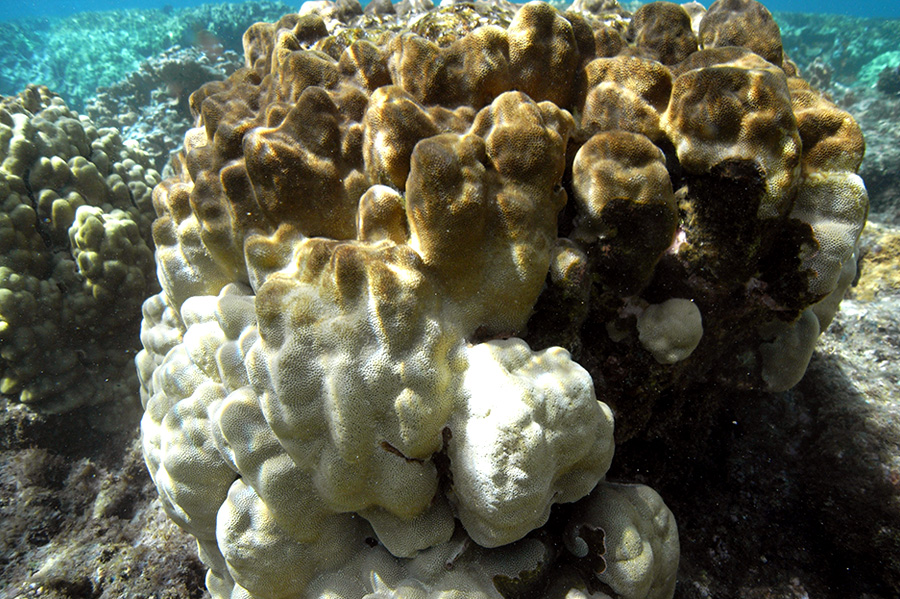