The students presented their own research on using oral histories of Marshallese and Yapese voyaging to support the development of community engagement for sustainable sea transport and climate change adaptation.

Three students from the University of Hawai‘i at Hilo recently attended a four-day workshop at Stanford University’s Archeology Center, Calif, where they presented their research into oral histories of Marshallese and Yapese voyaging.

“The workshop was absolutely incredible especially in terms of the impact on the students,” says Associate Professor of Anthropology Joseph Genz, who accompanied the students to Stanford. The workshop was a sequel to a two-year project that launched last fall, headed by Genz, where the students and a group of anthropologists, environmental scientists, and a philosopher from UH Hilo conducted research for an e-book on Pacific voyaging and navigation. The students are now in their second year on the e-book project.

Joining the Hilo group for the Stanford workshop were two navigation practitioners: Alson Kelen from the Marshall Islands and Larry Raigetal from Yap, who have been mentoring and freely sharing their knowledge and oral histories with the students for the past three semesters.

Genz writes in an email that the Hilo group was “blown away by simply being on the Stanford campus!”

The workshop participants included about 20 people in addition to the Hilo team. Along with the students, it was a diverse group of archaeologists, cultural anthropologists, environmental scientists, and maritime practitioners focused on sharing their research and mana‘o on the nexus of computational archaeology and seafaring theory.

Among the many topics, the Hilo group attended presentations and discussions that focused on how scholars are drawing from lived experiences and oral traditions to develop better computational models of seafaring. “This is the strength our team provided,” explains Genz.

Graduate students Tamagyongfal and Myazoe’s theses projects provide a lot of that strength with a focus on using oral histories of Marshallese and Yapese voyaging to support the development of community engagement for sustainable sea transport. Learn more about their project at the Pacific Islands Climate Adaptation Science Center (PI-CASC) website; the U.S. Geological Survey’s PI-CASC is supporting their graduate work. The two are part of a cohort of PI-CASC graduate scholars from UH Hilo, UH Mānoa, and the University of Guam.

Photos of students giving their presentations, click to enlarge:

Other topics explored at the workshop were on modeling voyages in what’s called “deep time” or the ancestral past, and how voyaging networks may have changed in response to past environmental changes (these findings are used as a tool to develop strategies today for climate change adaptation); comparative, cross-cultural models of seafaring in relation to environmental disasters and resilience; and community-based practices, including the UH Hilo master of arts in heritage management program that centers on Indigenous perspectives and community-based goals.

“Students met other graduate students and early career professionals from around the world, all with a shared interest in modeling ancestral seafaring systems,” says Genz. “Excellent networking opportunities.”

There was a lot of collaboration going on within the Hilo group as well. While at Stanford, the two graduate students mentored the undergraduate student as a continuation from last year’s e-book project. The students also interviewed the two navigation practitioners for their research. The navigation practitioners Kelen and Raigetal, who serve as committee members on the graduate students’ master theses, are excited about potential future partnerships with the people met at the workshop, to enhance their community organization’s goals of preserving heritage and developing climate change adaptation strategies.

Genz says the workshop experience “builds off of the students’ research and engagement in the voyaging ibook project as part of their participation in the Keaholoa STEM Scholars Program.” The Keoholoa STEM Scholars Program is an academic program at UH Hilo that aims to increase underrepresented minorities, especially Native Hawaiians and other Pacific Islanders, in science, technology, engineering, and mathematics, commonly called STEM, through various programs. 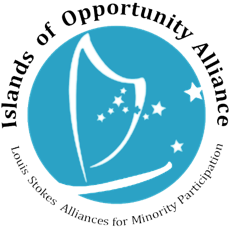 In addition to funding from PI-CASC in support of the graduate students, the trip was also supported by the Islands of Opportunity Alliance (IOA) funded by the National Science Foundation’s Louis Stokes Alliances for Minority Participation (LSAMP) program, which facilitates the success of historically underrepresented students pursuing baccalaureate and graduate degrees in STEM. Support for Genz’s participation was from a UH Hilo College of Arts and Sciences’ Faculty Professional Development Award.

Given that seafaring research is being undertaken with widely different approaches, the workshop presented the first opportunity to connect the eclectic researchers with each other. The meeting promoted the collaboration of everyone: early career scholars, Indigenous scholars, and those working with Indigenous communities, in order to facilitate a rich exchange of ideas and a more inclusive future community of practitioners.

Already Genz can see how the sharing of this traditional knowledge can have impact on modern problems.

“The possibility of diving into the remote past to model ancestral voyaging networks in response to environmental catastrophes and using that knowledge for community-based climate change adaptation strategies fueled so much dialogue, energized the students, and has opened new opportunities and potential collaborations,” he says.