A group of talented faculty, staff, students, and alumni from UH Hilo brought home a silver from the 43rd annual Telly Awards.

A group of talented faculty, staff, students, and alumni from the University of Hawai‘i at Hilo brought home a silver award from the 43rd annual Telly Awards in the Online General-Public Interest/Awareness category. The category recognizes branded content promoting public interest issues and activism.

Tracey Niimi, a UH Hilo alumnus who runs a professional video company, was director, director of photography, camera operator, and editor of the video. Niimi also is a student support specialist at the university’s Daniel K. Inouye College of Pharmacy.

“The Pono Pledge is geared to bring awareness to both visitors and locals on the idea of what it means to be pono while here on the island, while emphasizing both safety precautions as well as respect for the environment and local culture,” Niimi explains.

Also working on the project was Lito Arkangel, a lecturer of Hawaiian studies and music at Ka Haka ‘Ula O Ke‘elikōlani College of Hawaiian Language, who was program producer as well as a writer and translator. Alumnus Bruce Torres Fischer (Spring 2020, Bachelor of Arts in Hawaiian Studies and Bachelor of Arts in Linguistics), an experienced producer and sound engineer, was also a writer and translator.

The pledge was originally created in English, grounded in local culture with a few key ‘Ōlelo Hawai‘i (Hawaiian language) words and concepts. The award-winning video flips the prominence of English around and features UH Hilo faculty, staff, students, alumni, and extended university ‘ohana reciting the tenets of the pledge first in ‘Ōlelo Hawai‘i, followed by English translations.

Niimi credits Arkangel with the video concept and casting.

“Lito was the mastermind behind taking the existing Pono Pledge and massaging it to what it turned into,” says Niimi. “Bruce worked with Lito on getting everything translated over into ‘Ōlelo Hawai‘i. Lito also acted as the producer and was the one that thoughtfully recruited everyone who was in the video and coordinated out all of the shoots and locations.”

“All together,” Niimi says, “it was a rock solid team and a lot of fun to work on.”

The video is a visual expression of the Pono Pledge, a creed of respect asked of visitors to Hawai‘i Island. It also serves as a reminder to residents. 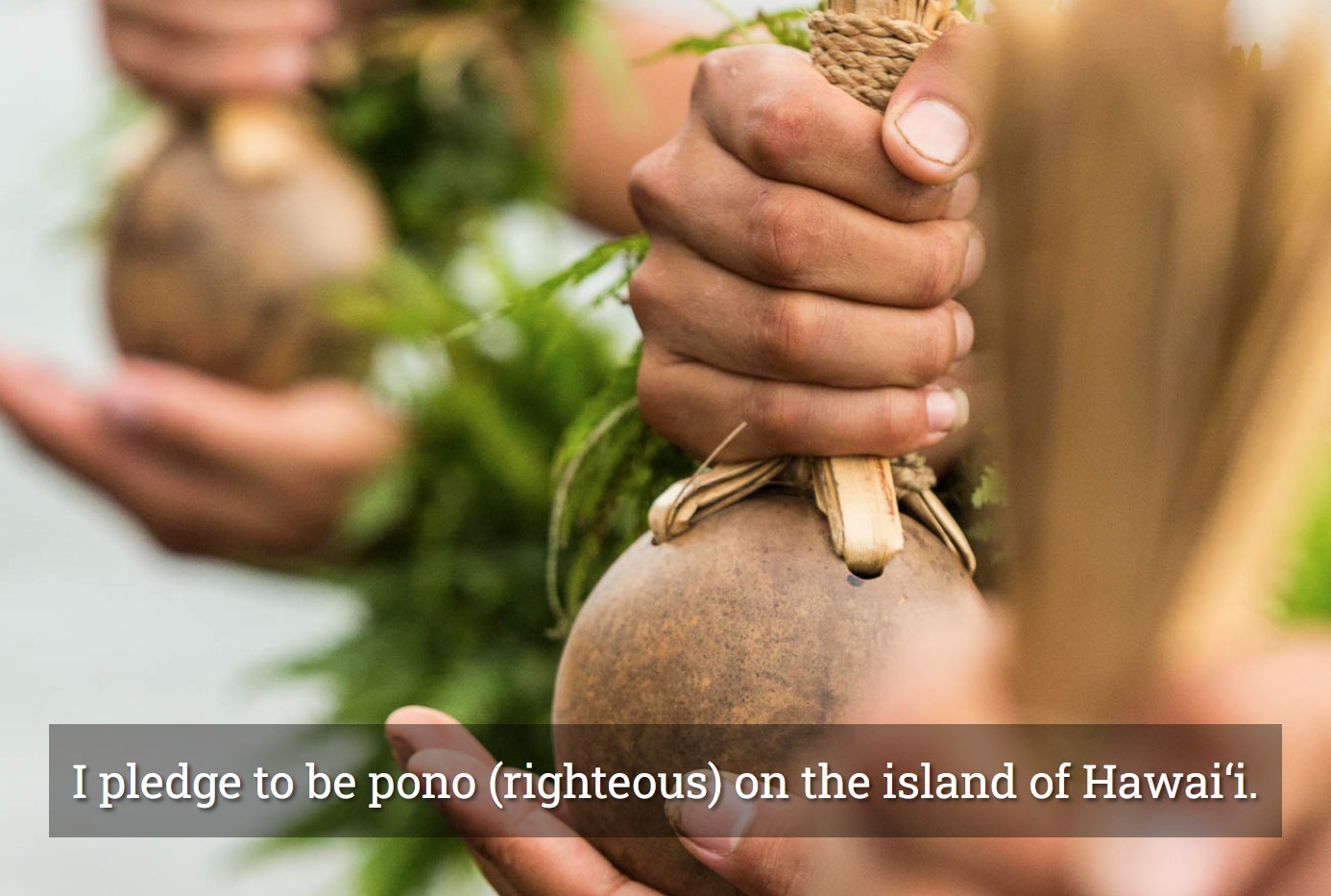 I pledge to be pono (righteous) on the island of Hawai‘i.

I will mindfully seek wonder, but not wander where I do not belong.

I will not defy death for breathtaking photos, trespass or venture beyond safety.

I will mālama (care for) land and sea, and admire wildlife only from afar.

Molten lava will mesmerize me, but I will not disrupt its flow.

I will not take what is not mine, leaving lava rocks and sand as originally found.

I will heed ocean conditions, never turning my back to the Pacific.

When rain falls ma uka (inland), I will remain high above ground, out of rivers and streams.

I will embrace the concept of being a steward of the land, revered as my loving chief.

E ‘apo i ke a‘o a ho‘ohana, a e ‘oi mau ka na‘auao. Those who apply their teachings increase their knowledge.

Founded in 1979, the Telly Awards is a national competition that recognizes outstanding local, regional, and cable TV commercials and programs, video and film productions, as well as online commercials, video, and films.

Niimi says the award was “such a nice way to recognize the project and all of the heart and good intentions that went into it.”

“It was also nice to see that we were in really good company in this category of Online, General-Public Interest/Awareness. Some of the others recognized with awards in this category included pieces by Comcast, NBC News/MSNBC, CBS News 60 minutes, and even a piece by the Honolulu Star-Advertiser,” says Niimi.

The video already has international exposure.

“The impact on people that have viewed the video has been so good that after joking that Hawaiian Airlines should use the video, the airline is now actually playing the video for all incoming mainland and international flights,” says Arkangel.

Niimi adds, “At the end of the day, all the credit goes to our Island of Hawai‘i Visitor’s Bureau for putting the initiative together and everyone that contributed to making it possible.”