Based on native Hawaiian cultural values of Ka Lama Ku and Leading with Aloha, the Student Leadership Development Program recognizes contributions students have made in their formal and informal leadership roles on campus and acknowledge those individuals who show strong evidence of future leadership potential. Each year, a committee of UH Hilo students reviews the nominations for award recipients and selects the awardees.

“The end of the semester is my favorite time of year because we get the privilege of acknowledging outstanding students on our campus,” says Maile Boggeln, coordinator of UH Hilo student organizations. “The Ka Lama Ku student leadership awards are the only awards on campus that recognize students for their leadership while here.”

“We were extremely thankful that we were able to hold an in-person ceremony this year for our award winners,” she adds. And hope that we will be able to have the award winners ‘ohana join us in person next year as well.”

The following students are this year’s recipients.

Zoé Acosta, a marine science major and student assistant at the Office of Admissions, received the Alaka‘i Award. The award recognizes leaders who inspire, excite, and provide commitment toward shared goals. Acosta was nominated for the award by Maria Vicente, an admissions counselor, who noted that Acosta sets an excellent standard for other student workers by maintaining a positive attitude, strong work ethic, and creative problem solving approach. She never fails to create a happy atmosphere at work and even seems to maintain a smile on challenging days. Her positivity is infectious and brightens the overall mood of the office. She is very conscientious of her responsibilities, is incredibly dependable, and responds quickly. When trying to find solutions to problems that arise, she is great at identifying possible causes and areas for improvement. All of these qualities work together to make her an excellent motivator and leader for the other student employees in the office.

‘Ike Pāpālua Award: To have the gift of vision

Isabella Arrieta, a graduate student in counseling psychology, received the ‘Ike Pāpālua Award. The award recognizes leaders who have the gift of vision.

Arrieta is focusing her graduate work on clinical mental health counseling while also working as a student assistant at the Women’s Center and the LGBTQ+ Center, and she also serves as a senator-at-large for the UH Hilo Student Association. The nomination was submitted by Chris Holland, associate vice chancellor for student affairs, who notes that Arrieta is a very passionate learner who excels in and out of the classroom and has continued to show great promise to better not only herself but the world around her. Some of her immediate success was in developing a plan to roll out Safe Zone training on a monthly basis along with a renewed interest in getting the Hilo Pride Club together and supported on campus. Her personality, work ethic, and ability to grasp a larger view of the world around her make her a perfect fit. 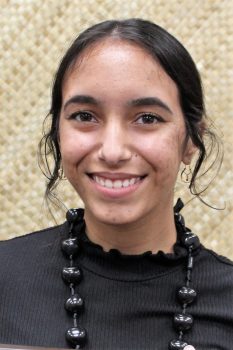 Briana Ferrin, majoring in geography and environmental science, received the Kuleana Award. The award recognizes leaders who instill and motivate others toward solutions, have respect toward others and are effective communicators.

Ferrin is a senior resident assistant for natural science students housed on campus. She was nominated by Landon Ballesteros, resident manager at the Office of Housing, who nominated her because of her ability to jump into problem-solving action and encourage her peers to be accountable and responsible. Her nominator was humbled by her sense of responsibility to her position, but more importantly to herself and values. Ballesteros describes Ferrin as a student who can leverage difficulty into opportunities, and wisely mentors and advises her students rather than just enforcing the rules. She also advocates for environmental sustainability, sets sustainability-oriented goals, and reminds her peers that all have a collective kuleana to Earth.

Laulima Award: No task is too big when done by all

Junita Jetley, majoring in administration of justice with a minor in anthropology, received the Laulima Award. The award recognizes leaders who know the importance of teamwork, networking, and collaboration.

Jetley serves as a resident assistant at University Housing and Residence Life, belongs to the Anthropology Club, and is a member of Student Support Services. He was nominated by Lewis Jacques, a resident manager at Housing and Residence Life. Jetley is described as being a dependable, engaging, kind, genuine and a respectful team player who leads by example with her can-do spirit. She dedicates time investing in others and creating connections to build a positive environment for those she works with and the residents she serves. She can often be found making connections with students, staff and campus partners to help build a network for herself and her peers. She has shown that she is an invaluable asset to the team and was selected for her skills in advocacy and empathy, which help contribute to her ability to enlist others to build a thriving housing community.

Laulima Group Award: No task is too big when done by all

The group was nominated by Professor of History Mike Skinner, who notes that the History Club went above and beyond to connect with each other and with the students on campus. They stayed engaged throughout the pandemic creating discord servers to keep in communication during lockdown. As covid restrictions were lifted, they jumped into action to plan Huakai for their peers and became an active group in person as well. (See photo at top of story.)

Mālama Award: Taking care of others and community

Jaslinn Makamae Kamaka-Mauhili, a business administration major, received the Mālama Award. The award recognizes leaders who take care of others and the community.

In her undergraduate work, Kamaka-Mauhili is focusing on marketing and management, and is also earning a minor in women’s studies and a certificate in business analytics and sustainable tourism. She is a member of Delta-Sigma Pi Business Fraternity, a member of the Student Support Services Program, and student representative for the UH Hilo Relationships Committee. She also serves as data director at the UH Hilo Student Association and works at Campus Center. She was nominated by Valdeane Odachi, an academic advisor and counselor, who notes Kamaka-Mauhili’s professionalism and advocacy for herself and peers. She has shown a dedication to her community and her culture through her time at UH Hilo and through all of her co-curricular pursuits. Odachi notes Kamaka-Mauhili has “demonstrated high moral character, sense of aloha for others, a strong commitment to completing her academic journey, dedication to her campus community, and the determination to continue to learn and grow into a strong leader for our local and global communities.”

Ku‘uhiapo Jeong, a psychology and communication major, received the prestigious Overall Ka Lama Ku Leadership Award, which has been awarded previously only four times. The award is reserved for exceptional student leaders who have gone above and beyond in the work they do.

Jeong is president of the Psi Chi International Honor Society in Psychology Fraternity; chairperson of the UH Hilo Board of Media Broadcasting; the undergraduate representative for the UH Hilo Committee for Excellence in Diversity, Equity, and Inclusion; and host and social media manager of UH Hilo Wailau storytelling program. He was nominated by Kathleen Baumgarder, strategic planning project manager for the university, and Chris Holland, associate vice chancellor for student affairs. Jeong was nominated because of his intense commitment and dedication to the UH Hilo and greater Hawai‘i Island community. He leads by example and, as noted in nomination papers, “his passion for the arts, communication, and his community shines though. He seeks out knowledge and to build relationships and uses all of this to contribute to significant efforts for his community.”