This year’s UH Hilo “Women in Science Conference” will be held virtually with panelists specializing in environmental and cultural conservation. 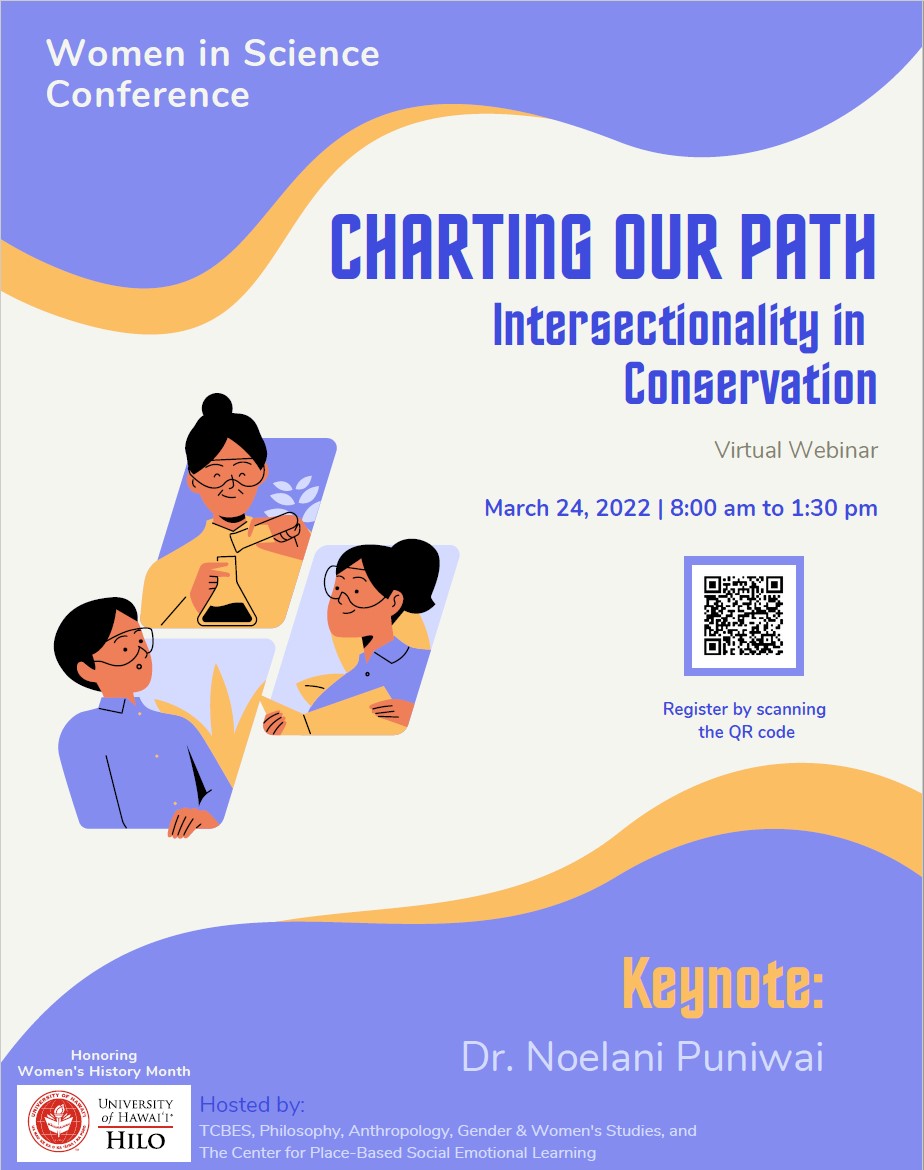 The University of Hawai‘i at Hilo will host this year’s annual Women in Science Conference (formerly Women in STEM Conference), “Charting Our Path,” online Thursday, March 24, 2022, from 8:00 a.m. to 1:30 p.m. Pre-registration is required. The recorded event will later be posted to YouTube.

Sponsors of the conference are the Kaiameaola Club from the UH Hilo tropical conservation biology and environmental science graduate program, in collaboration with the departments of philosophy, anthropology, gender and women’s studies, and the Center for Place-Based Social Emotional Learning. 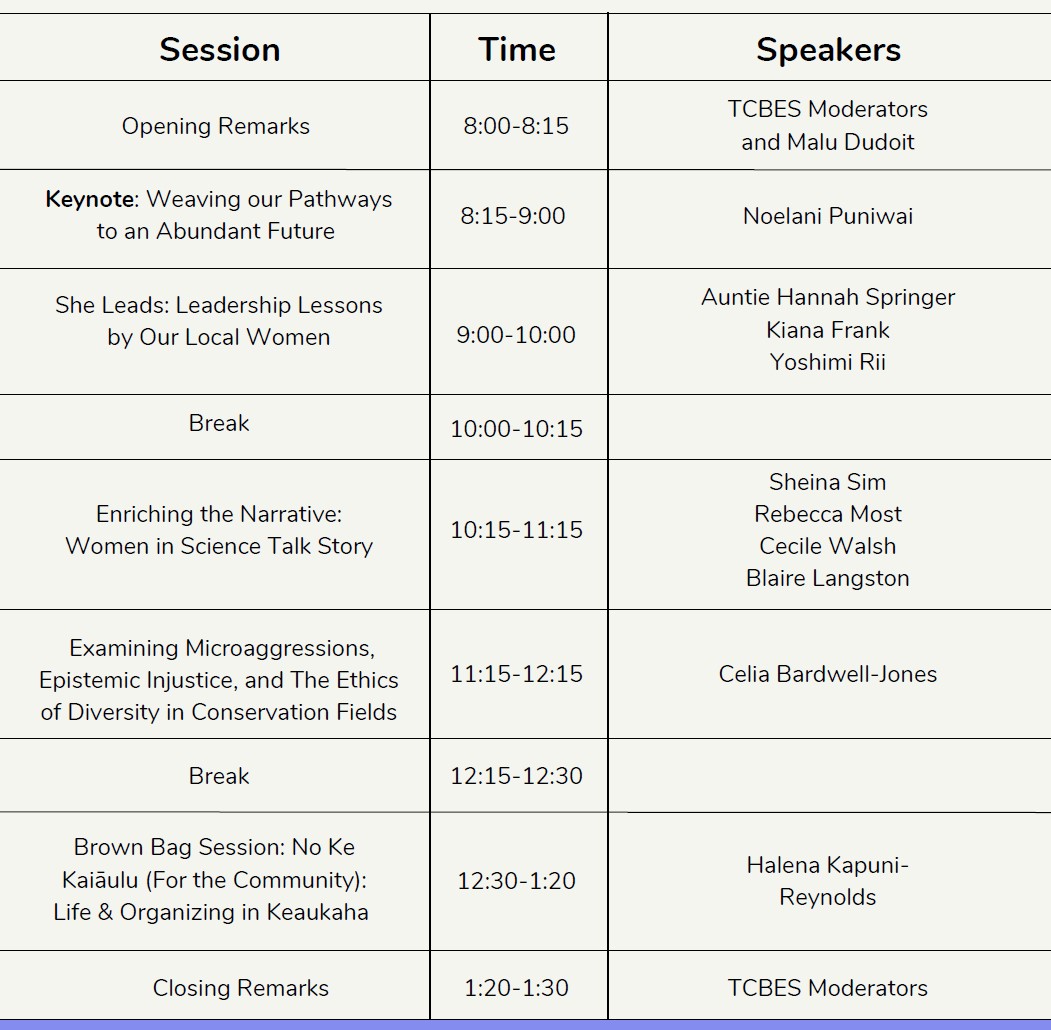 Speakers (in order of sessions)

Noelani Puniwai (keynote speaker) is passionate about cultivating the next generation of students to mālama ‘āina. She received her bachelor of arts in marine science from UH Hilo, master of science in environmental science from Washington State University, and doctor of philosophy in natural resources and environmental management from UH Mānoa. Her research interests include coastal ecosystems, indigenous and ethical science, knowledge co-production, and seascapes.

Hannah Springer is a kama‘āina of Ka‘ūpūlehu, North Kona, homesteading with her family. She is a life-long student of the cultural and natural histories of Hawai‘i and has served in volunteer, appointed, and elected capacities at island and state levels. She is active with the Ka‘ūpūlehu Marine Life Advisory Committee, which successfully advocated for a ten year, all species rest period, from shore out to a depth of 120 feet at Ka‘ūpūlehu and Kūki‘o.

Kiana Frank is from Kailua, O‘ahu, and is an assistant professor at the Pacific Biosciences Research Center at UH Mānoa. Her lab focuses on studying the microbial dynamic of Hawaiian ecosystems as a mechanism to better understand the connectivity between land and sea with respect to ecosystem function and traditional management.

Yoshimi Rii received her bachelor of science in marine science from the University of California, Los Angeles, and her doctor of philosophy in biological oceanography from UH Mānoa where her research focused on the population dynamics of eukaryotic phytoplankton in the Pacific. She is currently research coordinator at the He‘eia National Estuarine Research Reserve to coordinate research and monitoring. Her work also includes increasing science literacy of the general public and increasing diversity in STEM fields.

Sheina Sim is a research biologist with the U.S. Department of Agriculture’s Agricultural Research Service. She earned her bachelor of science in ecology and evolutionary biology at the University of California, Irvine, and her doctor of philosophy at the University of Notre Dame. She moved to Hilo for her postdoctoral work at UH Manoa. She has established a research program investigating the use of insect genomics and bioinformatics to support and protect American agriculture from invasive insect species.

Rebecca Most earned her master of science in tropical conservation biology and environmental science from UH Hilo in 2012. She then joined The Hawaiʻi Island Marine Program of The Nature Conservancy as the Hawaiʻi Island program manager where she supports community-based management to improve coastal and coral reef resilience. She also spends work days rebuilding rock walls, propagating native plants, and counting fish at Ka Loko o Kīholo (Kīholo Fishpond).

Blaire Langston earned her bachelor of science in marine biology from Stockton University, focusing on seagrasses in Barnegat Bay and microplastics in the Raritan River Basin. She completed a master of science in natural resource and environmental management, where she focused on bread fruit agronomics and marine debris on O‘ahu. She currently works as a marine coordinator for the Nature Conservancy’s Hawai‘i and Palmyra Chapter.

Cecile Walsh received her master of science in tropical conservation biology and environmental science from UH Hilo where she served as a graduate teaching assistant for two years while researching the propagation of Native Hawaiian algae (limu). She then joined The Nature Conservancy’s Hawaiʻi Island Marine Program in April 2015. She mapped out the distribution of alien algae on Molokai and Hawai‘i Island while at the Hawaiʻi Division of Aquatic Resources. She is currently with The Nature Conservancy coordinating community-based marine monitoring in West Hawai‘i.

Celia Bardwell-Jones is an associate professor of philosophy at UH Hilo and chair of the gender and women’s studies program. Her research is focused on feminist philosophy, American philosophy, philosophy of nature, and philosophy of race and cultural diversity.

Halena Kapuni-Reynolds was born on Hawai‘i Island and is currently a doctoral candidate in American studies and museum studies at UH Mānoa. For his dissertation, he plans to write on the colonial story of Keaukaha. He has conducted the first in-depth study of the Oceanic Collection at The Denver Museum of Nature and Science and published on that work. He has also written on the places of Keaukaha, where he was raised.

More information on the conference agenda and speaker list can be found online.

Pre-registration is required. The recorded event will later be posted to YouTube.