Michael Marshall’s 12-panel piece, on exhibit at Fishcake gallery on O‘ahu, is eclectically influenced by the art of Claude Monet, the lyrics of Marvin Gaye, and the existential threat of climate change.

The work of artist Michael Marshall, a professor of art at the University of Hawai‘i at Hilo, is part of an exhibit now underway at Fishcake, a design concept store in Kakaʻako on Oʻahu that specializes in artistic furniture, accessories, and art for the home. Fishcake often features art exhibits with contemporary design and artwork by local artists as part of their showroom display.

The theme of the current show is “Visual Poetry,” a movement that emerged with the advent of abstract art and avant-garde movements in the early 20th century. The exhibit is available for viewing in-person during Fishcake’s store hours now through April 9 at 307c Kamani Street. A digital gallery of the works can be seen on Fishcakes’ Instagram. 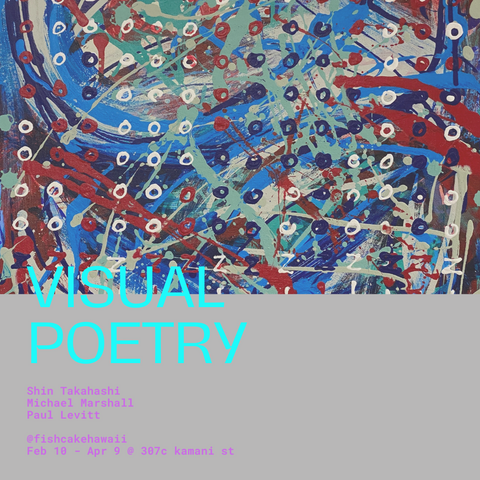 A commentary on climate change

Marshall’s piece on exhibit at Fishcake is titled “No Return to Bennecourt (in the time of climate change),” a work born from his reflecting on Claude Monet’s grim “Impression Sunrise” (1872), a postscript for the Industrial Age painted four years after his delightful and serene “On the Bank of the Seine River at Bennecourt” (1868).

“The unfortunate reality of our advancing technologies is that a return to a pristine natural environment is highly unlikely,” says Marshall in a statement on the piece. “Degradation of the planet has been the price of unsustainable progress. The collective exploitation and damage to habitat, which also impacts our social fabric, is now code red.”

The piece also draws on Marvin Gaye’s music from his 1971 “Mercy Mercy Me (The Ecology),” described as “an anthem of sorrow about the environment” with the lyrics “…things ain’t what they used to be, no no…”

Marshall explains in his artist’s statement that his piece “No Return” is an over/under fiberglass screen collage that combines “upcycled” papers, plastics, acrylic paint, and vinyl letters to create an extended concrete poem, delivered as a polyptych. The format (much reduced in scale) echoes Monet’s late waterlily triptychs and embeds an irreverent haiku in 12 parts that responds to data reported by the American Institute of Physics in August 2021

The work transitions through the physical color primaries of blue, yellow and red, four panels each. Each panel represents 16 years, starting 1818-1834 and ending 2006-2022.

The plastic circles, originally intended to isolate QR codes, take you directly to the “chronological sequence of the most important events in the history of climate science.” The research and warnings increased dramatically with the post WW2 Baby Boomer generation (1958-2022).

By Susan Enright, a public information specialist for the Office of the Chancellor and editor of UH Hilo Stories. She received her bachelor of arts in English and certificate in women’s studies from UH Hilo.