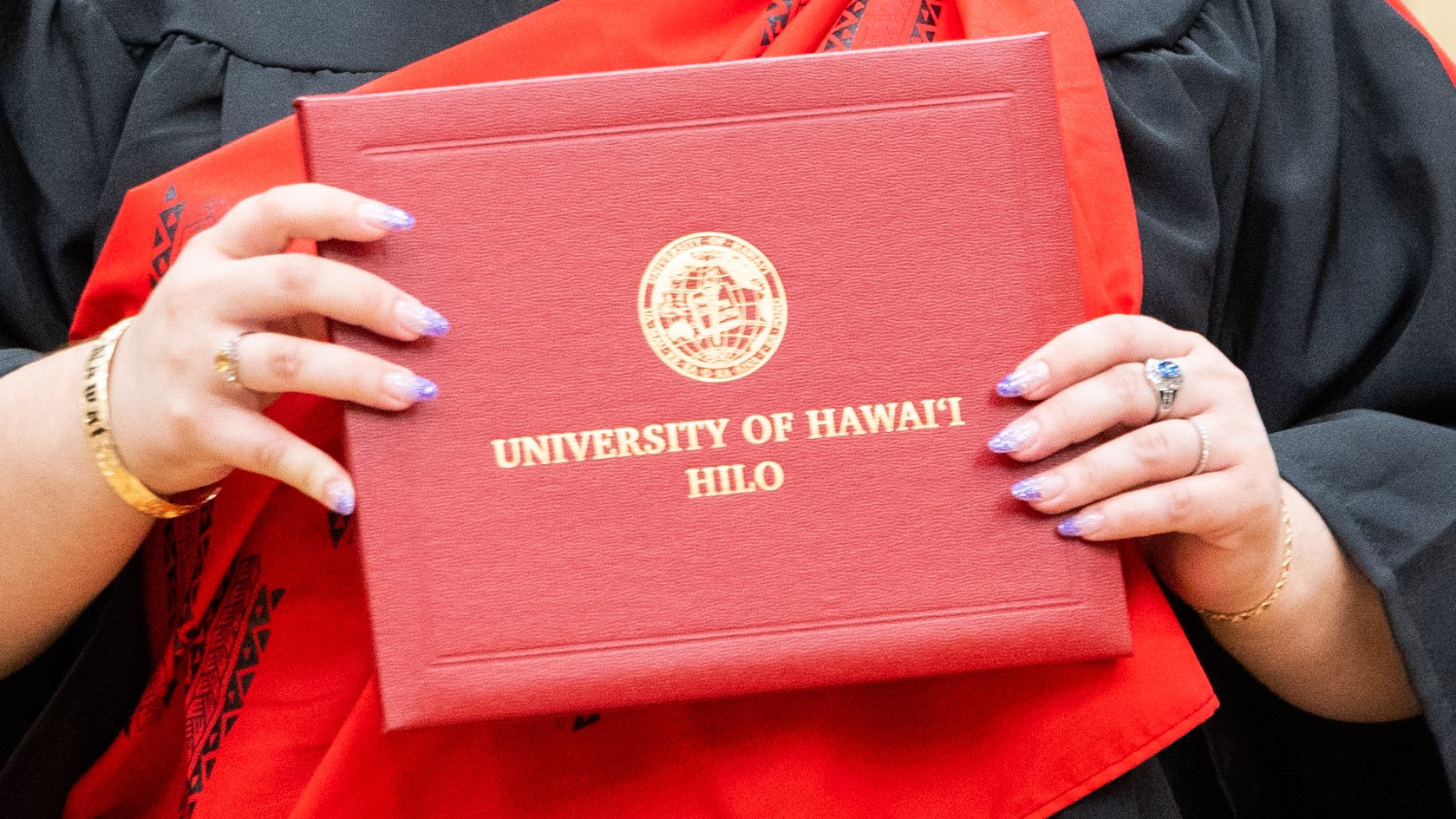 The University of Hawai‘i at Hilo will celebrate its 2021 Fall Commencement with two in-person ceremonies to be held Saturday, Dec. 18, at Vulcan Gym. The ceremonies will be livestreamed; the link will be available on the commencement website. The events will be modified from previous years to provide for COVID-19 safety protocols.

Approximately 232 students have petitioned for degrees and/or certificates and for various post-graduate credentials.

Students are allowed to invite two guests that must be registered and present a proof of COVID-19 vaccination or negative COVID-19 test in order to enter Vulcan Gym.

Steve Lundblad, professor of geology at UH Hilo, is the keynote speaker.

Originally from Yakima, WA, Lundblad says he experienced first-hand the eruption of Mt. St. Helens as it covered his town with ash during his high school years. This, coupled with his interest in the outdoors, fostered an interest in geology that continues today.

Since 2003, Lundblad has been teaching a wide variety of geology courses for majors and non-majors at UH Hilo, including field courses to the southwestern United States. Along with his students, he measures ground movement of Kilauea Volcano both near the summit caldera and in the lower east rift zone, which continues a decades-old data collection program begun by the Hawaiian Volcano Observatory.

Lundblad and Peter Mills, professor of anthropology, run UH Hilo’s geoarchaeology laboratory, which specializes in the non-destructive analyses of basalt, including volcanic artifacts from the Pacific in order to determine their source and exchange. The two researchers were major contributors to the analysis of lava flows from the 2018 lower east rift zone eruption in Puna and continue to provide geochemical analyses for a variety of projects.

Lundblad supports pre-college science and mathematics education with the generous donation of his time and talents to local science fair participants as well as to a number of outreach endeavors. He is also active in local bicycling groups.

He is the recipient of the 2018 University of Hawaiʻi Board of Regents Excellence in Teaching Award and the 2019 Koichi and Taniyo Taniguchi Excellence and Innovation Award.

Housman was a faculty member with Ka Haka ‘Ula O Ke’elikōlani College of Hawaiian Language and served as the director of the Hale Kuamo’o Hawaiian Language Center before retiring in 2015. She was honored as the Native Hawaiian Education Association’s Educator of the Year in March 2008 for her many years of service in the Hawaiian language revitalization movement.

She is a mother of four and grandmother of eight Hawaiian-speaking children, and has a long and distinctive career in public education that began in 1984 as the Hawaiian studies resource teacher for the Leeward District.

In addition, Housman was the first to pioneer the Hawaiian language immersion program in the Hawaiʻi public school system on Oʻahu in 1987, mentored and trained new teachers, developed curriculum, and taught elementary through intermediate immersion education throughout Hawaiʻi.

In 1991, she received the UH Mānoa Education Award for Excellence in Teaching and the Leeward District Teacher of the Year Award.

In 1999, the Hawaiʻi State Senate awarded her for work in Hawaiian immersion education.

Housman is currently teaching as a faculty member of the Hawaiian studies program at Brigham Young University, Hawaiʻi.