In the study, Professor of Biology Patrick Hart and a team of researchers tested an acoustic hypothesis in two very noisy communities of birds in both Costa Rica and Hawai‘i. The data can help conservation efforts.

Biologists at the University of Hawai‘i at Hilo have discovered complex communication strategies in bird species found in both Costa Rica and Hawai‘i forests.

Students and researchers based at the Listening Observatory for Hawaiian Ecosystems (LOHE) laboratory, housed within the Department of Biology at UH Hilo, routinely conduct studies on the incredible variability in how animals communicate with each other through sounds and also how scientists can use those sounds to improve monitoring the birds’ distribution and abundance over time.

The constantly improving listening techniques and the information gleaned builds an expansive data base and can be used in developing conservation measures.

“One major question the lab has been addressing over the past few years is whether acoustic space can be a limiting resource in diverse and noisy communities of singing birds,” says lead researcher Patrick Hart, founder of the LOHE lab and a professor of biology. Hart specializes in behavioral and community ecology of native forest birds.

“We know that when acoustic signals, or songs, sent from individuals overlap in frequency, then acoustic interference and signal masking can occur,” he explains. “This is similar to the way a person cannot tune to two radio stations playing at the same frequency and time, or to how we have a hard time understanding people when there is more than one person talking at the same time.” 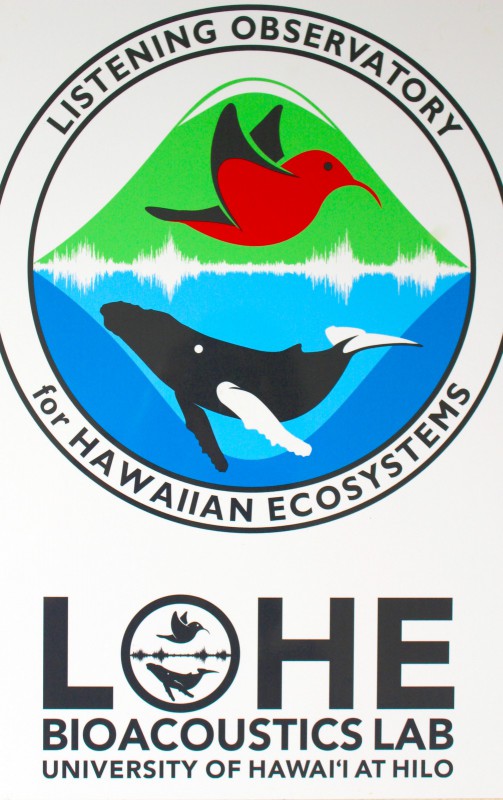 Financial support was provided through the Centers for Research Excellence in Science and Technology or CREST awards of the National Science Foundation.

The research team chose Hawai‘i and Costa Rica to conduct their studies because, as the team’s paper states, “tropical wet forests have the most species-rich assemblages of organisms that signal acoustically, and thus competition for acoustic niche-space is expected to be strongest there.”

The Costa Rica study site was in a forest fragment at the Organization for Tropical Studies Las Cruces Biological Field Station in southern Costa Rica at elevations between 1,025 and 1,200 meters. The site is dominated by a mix of primary and secondary wet forest with a canopy up to 30 meters tall and a midcanopy layer comprised of broadleaf trees, palms, and tree-ferns.

The Hawai‘i study was done within the Maulua tract of the Hakalau Forest National Wildlife Refuge on Hawai‘i Island. The canopy at this site is dominated by koa trees up to 25 meters tall with a mid-canopy of at least six native tree and tree-fern species. Hakalau contains the most intact forest bird community remaining in the state with nine native species, plus an additional four non-native species that are common in the forest.

The study relied solely on the use of passive acoustic monitors placed in the forest to collect acoustic data. No animals were captured, handled, housed, monitored, or followed. In the months of June through July 2012 in Costa Rica, and March through April 2015 in Hawai‘i, the team captured a total of 2,880 vocalizations and 4,489 vocalizations respectively.

Hart explains that under the “Acoustic Niche Hypothesis,” birds have evolved behaviors to partition acoustic space and minimize overlap with other singing individuals either through selection on the spectral characteristics of the song (the song’s frequency range) or on the timing of the song (wait for momentary gaps in which to sing). In other words, bird species avoid noise competition by singing in unique pitches with unique timing.

In the study, the researchers tested the Acoustic Niche Hypothesis in two very noisy communities of birds in both Costa Rica and Hawai‘i.

“If one walks into either of these forests, they might be immediately struck by the variety and abundance of bird song,” says Hart. “It often seems like many of the birds are all singing at once and it can be very hard to focus on a single calling individual.”

In order to understand how birds communicate in these communities and whether they have evolved behaviors to reduce acoustic interference of their signals, the researchers placed long term acoustic recorders at multiple locations in each forest.

The researchers used sound analysis software to create spectrograms or “sound pictures” of all the songs recorded from all of the different species that sing. They then measured how many times songs overlapped in each of many five-minute-long recording files, to calculate “observed overlap.” They used null models to create random distributions for the number of times the researchers would expect songs in the forest to overlap if the birds weren’t actively trying to avoid overlap, the “expected overlap.”

“We found that species in both Costa Rica and Hawai‘i actively reduced overlap with the songs of other species primarily through timing their songs to fit into momentary sound gaps,” Hart explains of the findings.

“This demonstration that birds in diverse communities partition acoustic space primarily along the temporal axis is a new finding that we hope will provide incentive for many future studies across the globe on the way animals communicate acoustically.”

By Susan Enright, a public information specialist for the Office of the Chancellor and editor of UH Hilo Stories. She received her bachelor of arts in English and certificate in women’s studies from UH Hilo.