Kit Neikirk’s research focuses on recording and analyzing the changes to mitochondria in relation to knock down of genes. He is currently on exchange studying abroad in Scotland, his first stop this academic year while continuing his studies in Europe.

A triple major studying genetics at the University of Hawaiʻi at Hilo has written five articles for publication in scientific journals. One is already published and four are in press.

Kit Neikirk’s research focuses on recording and analyzing the changes to mitochondria in relation to knock down of genes. He is currently on exchange studying abroad in Scotland, his first stop this academic year while continuing his studies in Europe.

“Anyone interested in the health profession, such as I, should try to expose themselves to as many cultures as possible, “ he says. “It is important you can work with someone from any background, as you never know who’s going to walk through that door in need of your help.”

Neikirk began his post-secondary academic career as a high school freshman at only 13 years old, when he also started classes at community college level. He graduated high school from Connections Public Charter School in Hilo as a sophomore, the youngest in his graduating class. He entered UH Hilo in 2019 as a 15-year-old triple major in biology, sociology, and chemistry. He plans to graduate with his bachelor degrees in spring 2023, and from there attend medical school to continue his journey toward becoming a healthcare provider.

Over the past summer, Neikirk was given the opportunity to work alongside one of his research mentors, Antentor Hinton, an assistant professor at Vanderbilt University who specializes in mitochondria and transmission electron microscopy, on several scientific journal articles. As of fall 2021, the budding researcher Neikirk has five journal articles that have been or are in the process of being published.

One focus of Neikirk’s research is looking at the changes (fusions and fissions) to mitochondria due to knock downs of certain genes and the methods in which the data can be analyzed. Gene knockdown is a temporary decrease in gene expression caused by an experimental technique.

In his article, “A Universal Approach to Analyzing Transmission Electron Microscopy with ImageJ”, Neikirk, alongside other professors and students, explains a technique for collecting said data using transmission electron microscopy. TEM allows scientists to create high quality black and white images of subcellular components by sending electrons through the sample.

Neikirk is now in studying abroad at Stirling University, Scotland, through UH Hilo’s Direct Exchange Program. His focus is on cell biology, ecology, and genetics, and is taking courses that UH Hilo doesn’t offer, allowing him to expand his education in ways he otherwise could not do.

After Stirling, he plans to attend Uppsala University in Sweden, where he will continue biology courses as well as his work in physiological research.

Neikirk is thankful for the academic and social opportunities he has had during his time abroad.

“It’s a wonderful and eye-opening opportunity to be somewhere with different people and different cultures.” He appreciates all of the “real life experiences” he is receiving through his time travelling, researching, and publishing with high-impact journals.

Neikirk is passionate about the furtherance of the scientific and academic community and plans to continue contributing to them through his future work as a health professional.

Neikirk’s plans to return to Hilo next year to complete a few upper level courses before finishing his bachelor’s degree in spring 2023. After graduation, Neikirk plans to take the Medical College Admission Test and continue his academic career in medical school.

He says he wants to use his knowledge and skills for the greater good.

“The COVID-19 pandemic has highlighted the need for help. We are in a global catastrophe and it’s hard not to be inspired to help.” He is looking into the medical fields of oncology, the study of cancer, and pediatrics, healthcare dealing with adolescents.

“I believe it is very important to give patients a chance to live a long and fulfilling life.”

Expanding opportunities for other students to get published, too 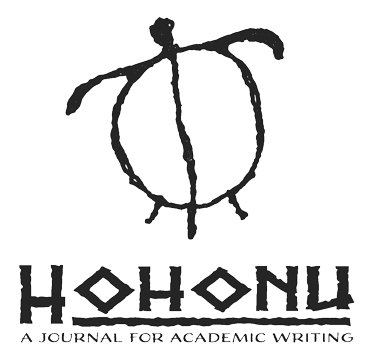 At UH Hilo, Neikirk serves as editor in chief for UH Hilo’s Hohonu: A Journal of Academic Writing, a program of the Board of Student Publications.

“Kit’s CV is nothing short of astounding,” says Kirsten Møllegaard, professor English, chair of the department, and an advisor for Hohonu. “We are fortunate to have him as a student at UH Hilo.”

Neikirk has big plans for the journal this year and speaks heavily on improving student opportunity to get published.

“I’m trying to give feedback to students and give them the chance to resubmit,” he explains. “I want to maximize the chance for students to get published.”

Neikirk also wants to expand the journal’s scope beyond publication. He plans on organizing and hosting virtual events that give students the opportunity to “critically engage” through discussion with peers.

“So much of science and academia as a whole is about discussion,” he says. “I want to give students platforms to read the Hohonu journal and facilitate those conversations between students that are so vital to the advancement of academia.”