The annual event honors Vulcan student-athletes in all 12 sports at UH Hilo for their academic and athletic achievements.

The annual athletics award ceremonies at the University of Hawaii at Hilo were held virtually this month rather than as a celebratory banquet event held at the end of the academic year. For the 16th Annual All-Sports Banquet, Vulcan student-athletes watched a pre-recorded video to find out who won the various awards that cover the athletes of all 12 sports both athletically and academically.

Female Athlete of the Year 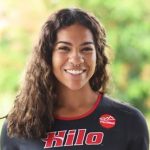 Female Athletes of the Year is volleyball star Bria Beale. Beale is now a three-time All-PacWest selection after helping to lead the Vulcans to a 14-2 spring season record. She led the conference in total kills and service aces, and was second in total points. With one season remaining in her Vulcan career, she already ranks sixth all-time in kills (977), is fifth in aces (99) and seventh in digs (855). Additionally, she was named to the All-West Region Academic Team for the second year in a row (CoSIDA), one of just eight players selected from the three west region conferences. The Eastvale, Calif. native graduated this spring with a 3.90 GPA in Communication, and is UH Hilo’s NCAA Woman of the Year nominee.

Male Athlete of the Year 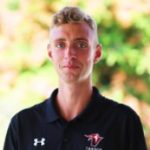 The Vulcan Male Athlete of the Year is tennis standout Martin Soukal. Soukal is a third-year player from the Czech Republic who earned All-American, All-West Region and All-PacWest honors. He finished the season ranked 10th in the country in singles with a 9-4 record. At one point, he won eight straight matches, including a straight sets victory over the PacWest Player of the Year Jakob Schnaitter of Azusa Pacific in the PacWest Championship match. It was Schnaitter’s only loss of the year. Soukal is now 27-8 on court one in singles during his Vulcan career.

Vulcan Team of the Year

The men’s tennis team is the Vulcan Team of the Year. The team, coached by Kallen Mizuguchi, had another banner year. They won the Pacific West Conference Championship, the first Vulcan team in any sport to do so since 2014. They also captured the NCAA West Region title, and won a match at the NCAA Championships to finish third in the nation. The Vulcans finished the year 11-3, with 11 of their matches coming against teams that were nationally ranked.

Sakai and Harue Wakakuwa Female Scholar Athlete of the Year

Joe and Harriet Estrella Male Scholar Athlete of the Year

The Kokua Award (Volunteer of the Year)

Vulcan Booster of the Year

The following student-athletes were honored as having the highest accumulative grade point average on their team: