John Kahiapo is known in his professional and volunteer work as role model for countless students and community members. Colleagues at the Department of Land and Natural Resources say education, outreach, and enforcement are wrapped into one for the dedicated conservationist. 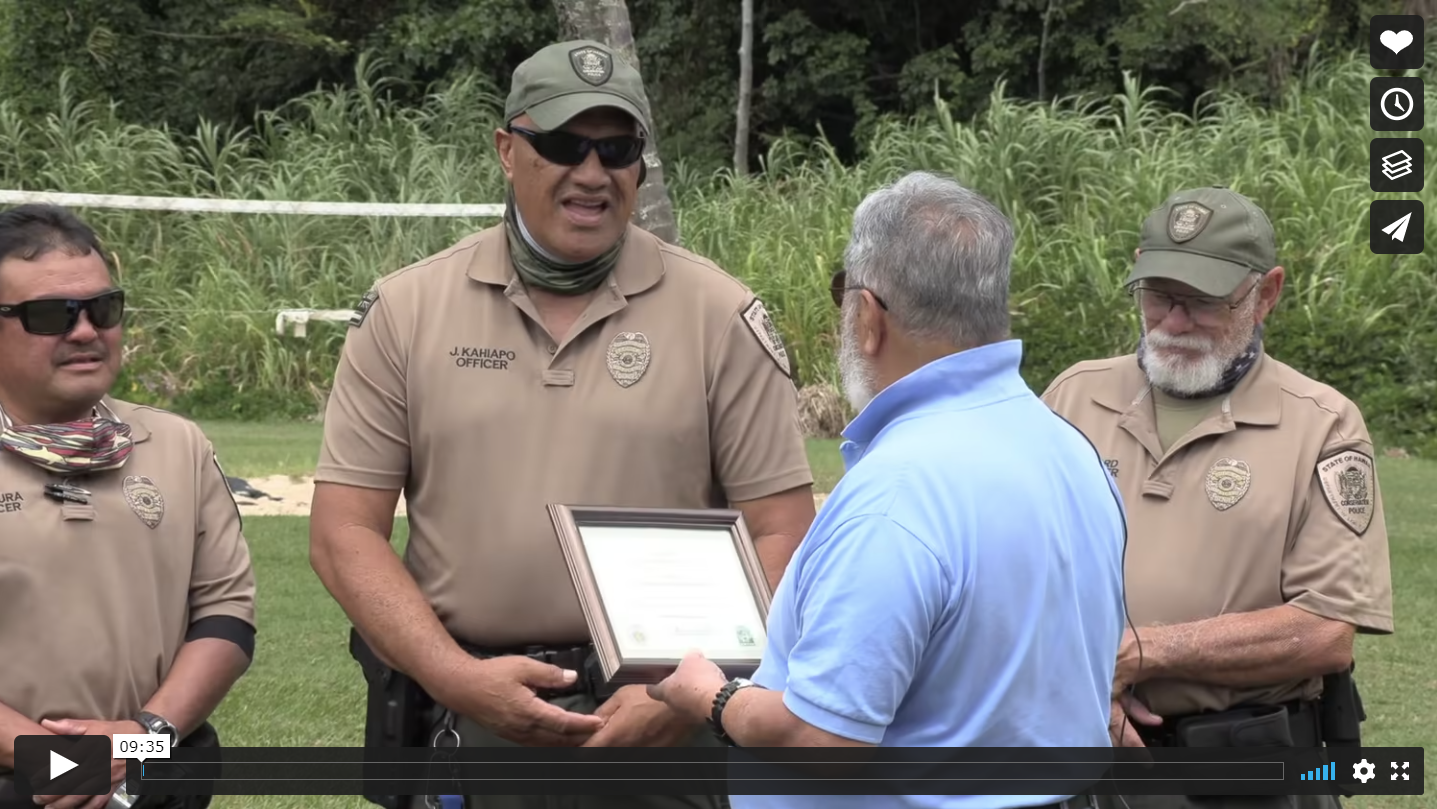 An alumnus from the University of Hawai‘i at Hilo, who works as a outreach and education specialist for the Department of Land and Natural Resources, was honored last weekend with a “DLNR Citizen Conservationist Award.”

John Kahiapo, a reserve officer at the Division of Conservation and Resources Enforcement or DOCARE, was at a back-to-school keiki fishing tournament at Laupāhoehoe Point Beach Park on Hawai‘i Island, talking with young fishers about pono practices, answering their questions about life in the ocean, and spreading the messages of conservation and protection of natural resources, when he was surprised with the award announcement.

Kahiapo received a degree in biology from UH Hilo in 1989, and at the same time began working as a small boat harbor agent in East Hawai‘i. In 1992, he began his first stint as a volunteer DOCARE officer and six years later became a full-time regular officer. He went back to reserve duty in 2001 to begin full-time work at the DLNR Division of Aquatic Resources.

DLNR First Deputy Robert Masuda presented Kahiapo with the award, which recognized Kahiapo for his 30 years of volunteerism and community outreach.

“I’ve known John and have admired his dedication, passion, and selflessness for many years,” says Masuda. “Both his professional work and volunteerism have made him a role model for countless students and community members, who have had the pleasure of working with him and learning from him. Education, outreach, and enforcement are wrapped into one for John—a great example of doing what you love and loving what you do.”

DOCARE Chief Jason Redulla adds, “I can’t tell you how much we’ve relied on John to back up our regular officers. He is always responsive and most importantly he is an outstanding example of a public servant. It would be easy for him to clock-out after a day of work at his regular job, but John keeps sharing his wealth of knowledge with people of all ages and has devoted thousands of hours of his own time in his role as a reserve DOCARE officer.”

“This all brings me joy, happiness, and pride,” says Kahiapo. Five of his fellow officers and his family were on hand for the presentation.

A life of protecting natural and cultural resources

By night, on weekends and on many holidays, Kahiapo switches roles from his volunteer work, puts on his officer uniform and backs up regular officers who patrol the vast expanses of Hawai‘i Island. His regular job and his volunteer job share a lot in common—they’re both focused on protecting what makes Hawai‘i and it’s natural and cultural resources precious and unique.

Kahiapo, who grew up in the Waimanalo Hawaiian Homestead, was grounded in local traditions and customs from the time he was born. He learned to catch and prepare fish from his father. He joined the U.S. Coast Guard in 1974 after graduating from Saint Louis School.

His first duty station was at French Frigate Shoals in the Northwestern Hawai‘i Islands, according to his daughter Shola Kahiapo-Trevino. “This set the tone for his career path by teaching him to pursue activities that bring him joy,” she says. He spent a total of 36-years between active and reserve duty in the Coast Guard.