The three students—Emily Burkhart, Alexander Coley, and Kiaria Zoi Nakamura, all graduating this spring—presented their research on Cli-Fi and Shakespeare. 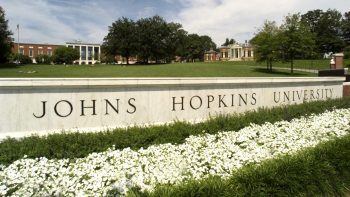 Three English majors from the University of Hawai‘i at Hilo presented their original papers at a prestigious research symposium hosted by Johns Hopkins University.

Emily Burkhart, Alexander Coley, and Kiaria Zoi Nakamura (co-author of this story) applied to present their research virtually at the Richard Macksey National Undergraduate Humanities Research Symposium under the guidance of Kirsten Møllegaard, professor and chair of the UH Hilo English department.

“This symposium was a wonderful opportunity for Emily, Alexander, and Zoi to showcase their work in a national context and to gain experience as presenters in a large-scale academic setting,” says Møllegaard. “Their participation in the Johns Hopkins symposium demonstrates the strength and relevance of the skills they’ve acquired in their undergraduate studies at UH Hilo.”

The three students, all graduating this spring, spent months preparing, revising, and practicing for their presentations, which premiered on the weekend of April 24-25. This unique opportunity granted them the chance to share their research to other students and scholars across the country and world.

Burkhart is a double major in English and gender and women’s studies. Her presentation was part of a larger project she is finishing up for her gender and women’s studies capstone project, “It is So Much Easier to Despair: Whiteness and Narcissistic Despair in Popular Cli-Fi.” Cli-Fi refers to climate fiction literature, which focuses on climate change and global warming.

“The aim of the project is to complicate widespread understandings of the Anthropocene (a proposed geological epoch reflecting climate change) and ultimately argue that white-authored climate fiction perpetuates settler colonialism by erasing various Indigenous interpretations of climate change,” Burkhart explains.

She goes on to explain that these narratives are a form of climate denial, which advocates for the need of cli-fi narratives that recognize the intersections of colonialism and climate change. Examples include texts found in cli-fi that are written by Indigenous writers.

Reflecting on her experiences in both preparing for and presenting at the conference, Burkhart feels she would have been completely lost had it not been for the support, input, and guidance of UH Hilo English professor Møllegaard, Celia Bardwell-Jones, and Leanne Day. Whittling down a 25+-page paper into a 10-minute presentation was no easy task, however she feels that the experience spurred her growth as communicator, researcher, writer, and thinker.

“The symposium was an excellent opportunity for supportive and positive encounters between intellectual peers to practice and explore academic discourse,” says Burkhart. “It was really empowering to see other undergrads who took their academic growth seriously and wanted to challenge themselves by presenting in a symposium like this.”

Like Burkhart, Coley and Nakamura’s research derived from a course they took at UH Hilo. Their theses focused on the literary works of playwright William Shakespeare.

“My project presents three instances in which the play’s protagonist, the titular Titus, furthers his family’s anguish by blindly enforcing Roman law and tradition,” says Coley

Pulling from independent feminist and historical analyses, his project built a case against uncritical acceptance of tradition. Coley adds, “In my conclusion, I highlight that traditionalism is not only dangerous, but futile, as the play’s end ushers in an era of change.”

Coley believes that his experience at the symposium could not have been better.

“The other panelists that presented alongside me were passionate and articulate,” he says. “I learned so much about Greek metatheatre during my session that it shocked me.”

He also expresses his gratitude for an attentive audience which asked provoking questions and offered their own interesting insights. Excitingly enough, one of the attendees was so intrigued by the topic of Coley’s presentation that they actually requested a copy.

“To any [students] reading this, please take the time to seek out and apply to such opportunities yourself,” Coley says about the symposium. “It really is a joy to share your research with peers and to appreciate the investment that everyone around you has put in to pull off a successful conference,” says Coley. He also expresses his gratitude to Møllegaard and the English department for assisting in the “wonderful conference opportunity.”

Nakamura is majoring in English with a minor in performing arts and a certificate in educational studies. Although she also focused on the works of Shakespeare for her Macksey presentation, she took on a different approach to better understand how to read, analyze, and teach his works in the classroom. Her essay is called “Reflective Relevance: A Contemporary Examination of Shakespeare’s Othello.”

“Shakespeare’s works are woven into the fabric of nearly every English subject classroom, being the most cited author within the Common Core English Language Arts Standards,” says Nakamura. “However, with growing efforts to decolonize the curriculum, the question as to whether or not Shakespeare ought to be on the chopping block, is regularly revisited.”

To illustrate Shakespeare’s persistent relevance to contemporary audiences, Nakamura examined Othello: The Moor of Venice. Drawing on examples from the 2021 presidential election, the Black Lives Matter movement, systemic racism in America, and statements from Shakespearean scholar Ayanna Thompson, she honed in on the powerful teaching tool that Shakespeare’s works are, but also the necessity of providing a safe and open forum for students to discuss controversial topics freely.

“The only reason I am a more confident writer, artist, and activist is because of the wonderful mentorship I’ve experienced at UH Hilo,” says Nakamura. “I would not be who I am without my teachers, specifically Kirsten Møllegaard, Leanne Day, and (dance instructor) Kea Kapahua.”

Looking back on her participation in this conference, Nakamura admits she was very nervous going into this symposium. She not only felt pressure to represent her school sufficiently, but also the subject matter.

“As an Asian American, I personally cannot speak on Black experiences,” says Nakamura. “However, I think there is power in using one’s BIPOC [Black, Indigenous, People of Color] voice to make space for other marginalized voices. There’s a sense of unity in that, a sense of mutual empowerment that no one can take away.”

Story by Kiaria Zoi Nakamura, who is earning a bachelor of arts in English with a minor in performing arts and a certificate in educational studies at UH Hilo. Co-author is Susan Enright, a public information specialist for the Office of the Chancellor and editor of UH Hilo Stories. She received her bachelor of arts in English and certificate in women’s studies from UH Hilo.