Nicholas Iwamoto will headline an episode of the Wailau storytelling series on Saturday, April 24 at 2 p.m.

In 2009, Iwamoto was brutally stabbed more than a dozen times and thrown 100-feet from a cliff. The bone-shattering fall left him with a broken neck, fractured skull and collapsed lungs. His attacker was committed to Hawaiʻi State Hospital.

But in 2016, utter shock crept back into Iwamoto’s life—he had learned his assailant would be released, which propelled him to fight to protect violent crime victims. He prepared a fiery message to take all the way to the State Capitol.

“I gave them all the gory details. This was a watershed moment for me because I learned the power of my voice,” he explained. “My experience with trauma and my refusal to stay quiet mean I am in a unique position to reach those who are hurting.”

Pain is something Iwamoto knows all too well. Physical and emotional wounds sustained from the gruesome stabbing proved too difficult. Drugs prescribed to ease his discomfort manifested into a crippling addiction.

“I lost so much time. I realized in 2015 that if I was ever going to live my second life to the fullest, I would have to get clean. I was the only one who could get myself out of this hole. I consider my sobriety and my survival to be my greatest achievements.”

In fall 2020, Iwamoto celebrated yet another accolade, the 35-year-old graduated with honors from UH Hilo earning a bachelor of arts in history. For him, school became a desperately-needed sanctuary.

“My time at UH was an integral part of my reintegration to the world after many years of reclusion. Going back to school has made me realize the power of my imagination…I want to take my education as far as my mind and body will allow.” 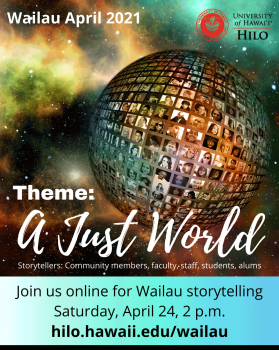 Iwamoto is getting ready to share his harrowing story of survival on UH Hilo’s new virtual storytelling program, Wailau. The free monthly event was created to empower the community through personal stories. Iwamoto will headline April’s episode, A Just World, on Saturday, April 24 at 2 p.m.

“I want the audience to know that hope can be found in the most hopeless situations. I want them to find a strength within they never knew existed. More than anything, I want them to know they’re not alone.”

Iwamoto has his eyes set on writing a book about his unexpected journey.