The Hawai‘i Public Radio one-minute spots feature a different bird each week, complete with audio of the bird song and Prof. Patrick Hart’s descriptive narrative. The second segment aired this week and already is in the top ten most popular posts on HPR for the year. 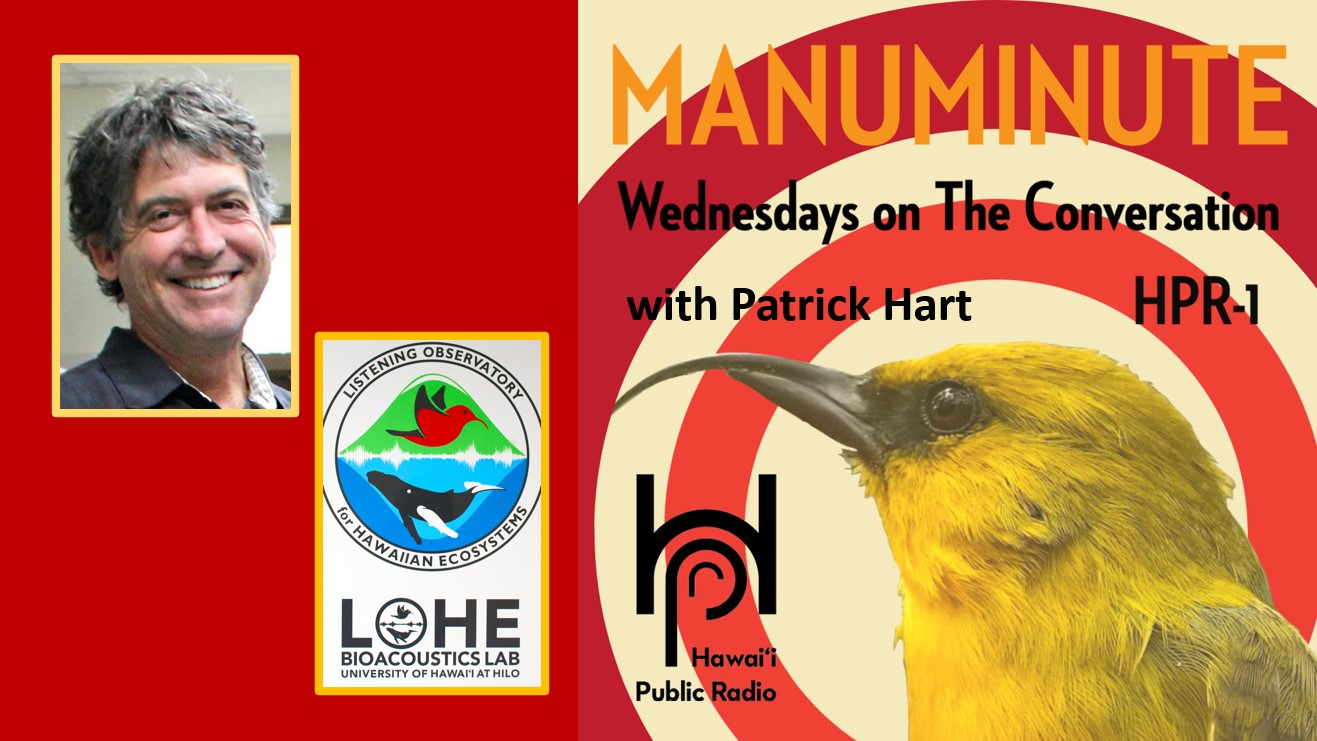 Ever the educator, Patrick Hart, a professor of biology at the University of Hawai‘i at Hilo who specializes in the conservation of Hawaiian forests and forest birds, has teamed up with Hawai‘i Public Radio to produce an ongoing series called Manu Minute featuring a different native bird each week.

“We have had two segments now,” says Hart. “[The series] will run during ‘The Conversation’ on HPR every Wednesday. We will focus on a different bird each week, leading with the bird’s song, then me talking about the natural history and conservation of the bird, and ending with its song again, all in one minute.”

In the new Manu Minute radio series, the audio of each bird song is made from field recordings conducted by Hart’s Listening Observatory for Hawaiian Ecosystems (LOHE) Lab. In addition to the audio of the bird’s song and Hart’s narrative, each published segment includes a descriptive article about the species written by Hart, photos of the bird, and an image of the spectrogram of the bird’s song showing the details of the unique sound of each bird.

The Manu Minute debuted on Oct. 17 with the ‘i‘iwi or scarlet honeycreeper. An excerpt of Hart’s description of the bird:

The scarlet honeycreeper, also known as the ‘i‘iwi, gets its name from the bright red plumage on its body. Native Hawaiians valued the bird for its vivid color, and often incorporated the feathers of the ‘i‘iwi into elaborate ahu‘ula (feathered cloaks) and mahiole (feathered helmets) for ali‘i.

While an adult scarlet honeycreeper is easy to spot, juvenile ‘i‘iwi have more subdued plumages of orange, yellow, and brown, which helps them to camouflage as they learn their way through Hawai‘i’s native forests.

This week, Hart’s Manu Minute features the amakihi, a species “among the last native non-shore birds that can be found near sea level.”

Need a moment to relax? Join us for this week’s Manu Minute, a new feature of HPR and UH-Hilo’s bioacoustics lab. This week, our host Patrick Hart tells us about the ‘amakihi, a first-class forager with a sharp song. (Photo: Ann Tanimoto-Johnson) https://t.co/VNjpAj3QQj pic.twitter.com/1xMapg72i7

Hart says he just learned this second segment is in the top ten most popular posts on HPR for the year.