With her first novel just published, Instructor of English Susan Wackerbarth is an example of how passion for one’s craft, combined with hard work and dedication, can get you where you want to go. She stands as an inspiration to her students.

To answer these questions, one can look to the life and career of Susan Wackerbarth, instructor of English and creative writing coordinator at the University of Hawai‘i at Hilo. Her journey to publishing her first novel, No Place Like Home, is nothing short of wisdom and inspiration and one that reflects the long and winding road that travels between her experience as a writer, editor, and educator.

“Writing is a process of discovery, and you will learn so much about yourself and the world through writing a novel,” she says. “While following accepted formulas can make your work more marketable, I think it is most important to write what you want to write, the way you want to write it.”

Wackerbarth studied at Seattle Pacific University and the University of Washington, where she received her bachelor of arts and master of arts in English. She also attended Goddard College, where she completed her master of fine arts in creative writing. During her time at UW, she served as a teaching assistant, which allowed her a glimpse into the world of education. However, she then chose to leave the world of academics behind. Wackerbarth explains that she felt “disillusioned with academia and uncertain whether I wanted a career in higher ed or in teaching at all.”

In between then and now, Wackerbarth held many different positions in many different places. For a period of time, she worked for Microsoft in corporate communications and then moved to South Africa, where she became a technical writer for the Chamber of Mines Research Organisation in Johannesburg. Her son Peter’s birth, in Johannesburg, set her on the part-time and freelancing path. So next was a career in copy editing and blurb writing for Shuter & Shooter Publishers and for Centaur Publications in Pietermaritzburg, Natal.

Following the birth of her daughter, Laura, and a move to KwaZulu, Natal, Wackerbarth freelanced for the Durban-based Community Law Center, traveling with paralegals to remote villages, interviewing people about current topics (with an interpreter) and writing articles in simple English (with a Zulu translation) for Izindaba (Community News).

It wasn’t until Wackerbarth moved back to the United States to Juneau, Alaska, that she circled back to a career in education. She remembers, “I started teaching at the University of Alaska-Southeast. I was surprised to find that I loved it, no longer desperately nervous,” as compared to the anxieties that her time as a teaching assistant generated.

Wackerbarth’s next move brought her here to Hawai‘i Island and UH Hilo.

“I started teaching writing for the professions because of my experience in technical writing,” she says. “I picked up other classes and got an instructor job [as] full-time faculty. I loved UH Hilo, the English department, and students. I had found my professional home.”

In addition to her instructor’s role, Wackerbarth is also one of the founding facilitators of UH Hilo’s certificate in creative writing program. Conceptualized by retired Professor of English Kenith Simmons and materialized by Wackerbarth herself with the encouragement of current professors of English Seri Luangphinith and Kirsten Møllegaard, the 18-credit program found its way into the English department curriculum in the fall of 2016 and currently boasts 35 graduates.

“Whether students are English majors or minors, or just want a certificate to show another side of themselves and their expertise, the creative writing certificate is a great way to show a concentration in that field, or, for science students and other majors, to show how well-rounded you are,” says Wackerbarth. Creativity is recognized and sought after as a valuable trait in every field. And every field also requires effective storytelling skills. Plus it’s fun.”

Yet, despite spearheading an entire certificate program, bringing new courses such as the creative writing program capstone and flash fiction writing to fruition, and fulfilling her duties of being a teacher, Wackerbarth still found time to write. 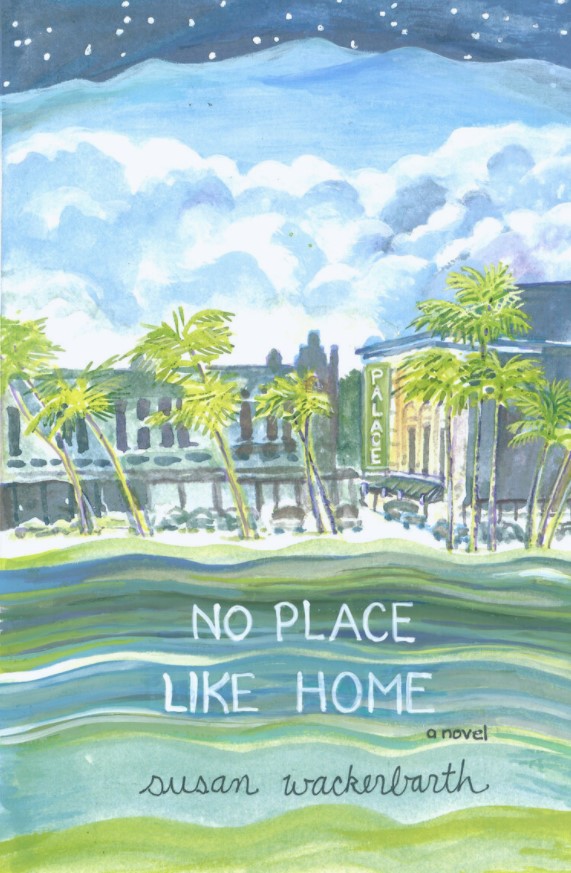 Inspired by her time on Hawai‘i Island and her performances on the Hilo Palace Theater’s stage, Wackerbarth began cultivating No Place Like Home in 2010 as her Goddard College master in fine arts thesis.

“I wanted a story idea that brought a lot of different characters together, and I wanted a clear timeline for my plot, so a community theater production at my beloved Palace Theater seemed just the thing,” Wackerbarth explains.

The final version of the novel goes a little something like this:

The East Hawai‘i Community Players need a smash hit to save Hilo’s historic Palace Theater from the ravages of time, tropical weather, the ailing economy, a menacing network of drug dealers—and themselves from all manner of folly and heartbreak. The Wizard of Oz will be a sure thing. Or will it? Susan Wackerbarth tells this wry, playful story through an unlikely constellation of haole misfits, both “grown” and “flown,” trying to find their way on the Big Island. Quirky, bittersweet, and suspenseful, this novel explores each person’s longing for a home of the heart, and climaxes in an opening night no one will forget.

No Place Like Home is an independently-published project through IngramSpark. However, print copies and ebook versions are also available through Amazon, Barnes and Noble, Apple Books, and the Library register. The novel will also be available in local independent bookstores, Basically Books in Hilo and Kona Stories by the end of next week. The author also hopes the book will be available soon at the UH Hilo Bookstore and Big Island BookBuyers in Hilo.

Although Wackerbarth just released her first novel, she is already working on other projects. The first novel she ever penned, Frog Dreams, remains unpublished, however she hopes to change that soon. She also has a half-written third novel that she is debating to transform into a novel-in-stories and she has already begun writing an entirely new book which originated in a weekly online Zoom writing group.

Wackerbarth is an example of how a passion for one’s craft, combined with hard work and dedication, can get you to where you want to go. She stands as an inspiration to her students, many of which dream of one day becoming published authors, too. She hopes that aspiring students will take the leap to authorhood and embark on a path that will be more rewarding than one could ever anticipate.

“Your characters will reveal themselves and show you the way,” she says. “It’s really hard, so you have to be kind to yourself and stick with it, even when it seems like an irredeemable mess.”

She recommends budding writers develop relationships with other writers and get a writing group together if possible. But she thinks success can still be possible even if the journey is done without peer support.

“There are so many ways to write, and so many ways to be a writer, as many as there are people,” she says. “Don’t listen to anyone who tells you: you have to do it their way.”

Find more news about the Department of English on their web page.

Story by Kiaria Zoi Nakamura, who is earning a bachelor of arts in English with a minor in performing arts and a certificate in educational studies at UH Hilo.