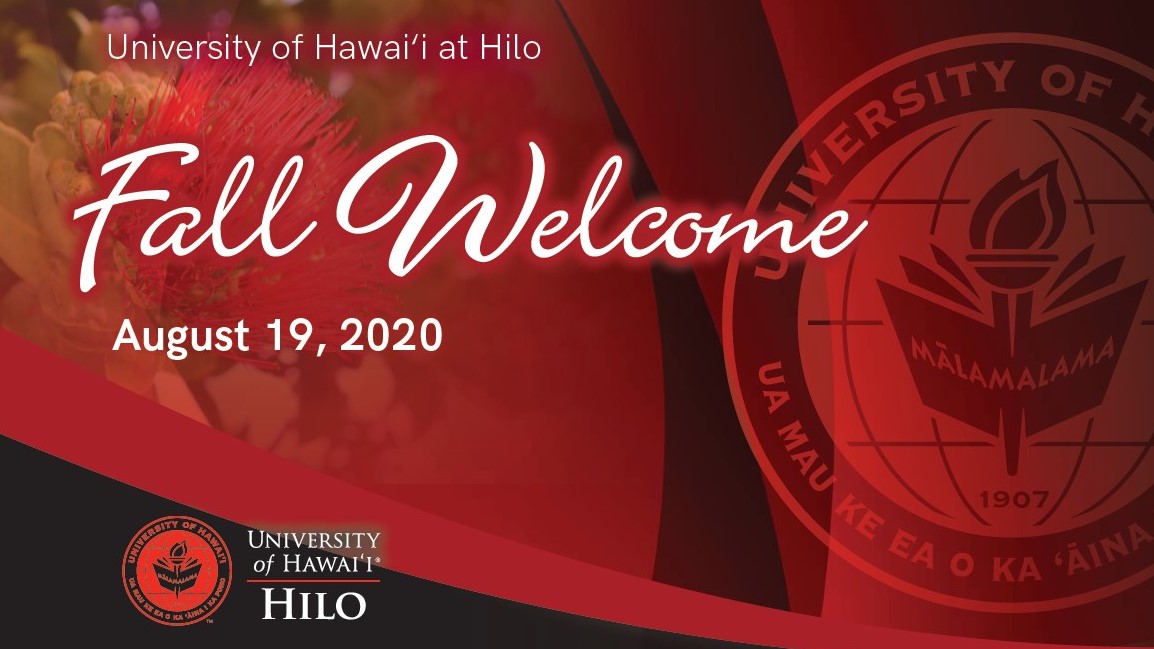 The University of Hawai‘i at Hilo welcomed 11 new faculty and staff at a virtual Fall Welcome event on August 19, 2020, via the online conference platform Zoom. Chancellor Bonnie Irwin and the university’s vice chancellors Kristen Roney, Kalei Rapoza, and Farrah-Marie Gomes hosted the event.

The following people were welcomed to the UH Hilo ‘ohana.

Kristen Roney, Vice Chancellor for Academic Affairs. Vice Chancellor Roney officially started her new position at UH Hilo on August 17, and officially finished her 14-day quarantine on island with her husband two days before that. Before joining UH Hilo, VC Roney was associate vice president for academic programs and founding dean, University College, and graduate studies, at California State University, Monterey Bay. Prior to CSU—Monterey Bay, she served in other administrative and faculty positions at the University of North Georgia (formerly Gainesville State College) where she partnered across a multi-campus environment of 16,000 students for core curriculum and learning support planning, assessment, faculty development, and strategic space use and allocations. She also provided leadership and vision for interdisciplinary- and academic success-focused units, including retention and progression assessments and responsibilities. She received her doctor of philosophy and master of arts in comparative literature, University of Georgia, and her bachelor of arts in English from Norfolk State University. She shares that she loves heavy metal and punk rock—both listening and attending shows—and getting in mosh pits.

Bradley Thiessen, Director of Institutional Research, Office of the Chancellor. Director Thiessen joins UH Hilo from New College of Florida in Sarasota, where he served as the president’s chief of staff, director of institutional performance assessment, accreditation liaison, and a professor of statistics. He has over 15 years of experience in higher education, earning tenure at two institutions and advancing to the rank of professor in 2014. Director Thiessen established offices of institutional research twice in his career and has led institutional assessment efforts at three different institutions. He received his doctor of philosophy in measurement and statistics from the University of Iowa and has accreditation as a professional statistician from the American Statistical Association. He shares that the last book he read (that he says wasn’t a boring statistics book or a children’s book for his kids) was Qualityland by Marc-Uwe Kling, and since the pandemic, has a new hobby of building Lego sets with his kids.

Chester Dabalos, Instructor in Chemistry, College of Natural and Health Sciences. Instructor Dabalos joins our UH Hilo ‘ohana from UH Mānoa where he was instructor of chemistry for five years. He received his doctor of philosophy in biophysical chemistry from UH Mānoa, his master of philosophy from the University of Cambridge, and his bachelor of science from the University of the Philippines Los Banos. If given the opportunity to do research, he will pursue either agricultural chemistry or chemical ecology, two areas that are relevant for Hawai‘i Island. In his spare time, he enjoys collecting coins, stamps, paper bills, rocks, and shells.

Sharyl Kasarskis, Administrative and Fiscal Support Specialist, College of Agriculture, Forestry & Natural Resource Management. Sharyl Kasarskis joins UH Hilo after spending five-plus years at Hawai‘i Community College as a contracts and grants specialist. A native of Pahala on Hawai‘i Island, Sharyl says it feels as if she’s back home at UH Hilo. Prior to Hawai‘i CC, she was with the Research Corporation of the University of Hawai‘i (UH Hilo, Office for Research) providing pre-award support to the UH Hilo campus. During her 14 years there, she had the opportunity to work with many UH Hilo faculty and staff and says it is nice to re-connect with people. She received her bachelor of arts from the University of Southern California and her master of research administration from University of Central Florida. She shares that her favorite pastime is spending time with her rescue cat, Charlie.

Corin Kim, STEM Coordinator and Student Employee Supervisor, Kilohana: The Academic Success Center. Corin Kim joins us from Leeward Community College where she was the PEEC II coordinator for 2.5 years. PEEC II is a National Science Foundation-funded, pre-engineering grant that aims to create pathways and opportunities for underrepresented minorities, especially Native Hawaiians, in the engineering field in Hawai‘i. Born and raised in Hilo, her responsibilities with Kilohana includes conducting more focused outreach with STEM students and faculty and increasing Kilohana’s work with STEM units. She received her bachelor of arts in biology from UH Mānoa with a certificate in Hawaiian Language, and her master of science in global health from the University of Notre Dame. She says she love dogs and recently became a foster for Aloha ‘Īlio Rescue.

Kaniela Aiona, Head Men’s Basketball Coach, Intercollegiate Athletics. Coach Aiona, a graduate of Honoka‘a High School, joins UH Hilo from Menlo College in Atherton, California, where he spent the past five seasons as the Oaks’ head coach. Prior to Menlo College, he served in assistant roles at Saint Leo University in Tampa, Benedictine University in Chicago, Lake Forest College in Chicago, Central Methodist in Fayette, and Webster University in St. Louis. He received his master’s degree in education from Central Methodist University and his bachelor’s degree in advertising and marketing communications from Webster University. Coach Aiona shares that in the summer of 1969, his mother, grandmother and great-grandmother were all enrolled in classes at UH Hilo (Hilo College at the time). He and his wife, Kelly, have two children, the youngest being just a few weeks old.

Christopher Leonard, Head Volleyball Coach, Intercollegiate Athletics. In 2020, Coach Leonard became the seventh volleyball coach of the storied Vulcan volleyball program. The Big Island Sports Hall of Fame inductee previously served as the Vulcans’ interim head coach in 2019 when he led the team to a 23-8 record and a berth in the NCAA tournament for the first time since 2011. He was also the Vulcan Volleyball assistant coach from 2014-18. Coach Leonard has over 20 years of coaching experience at the high school and club level. He is also the president and general manager of New West Broadcasting Corp., a Hawai‘i-based organization that owns and operates five radio stations, including KWXX (94.7 FM) in Hilo and AM 670 KPUA, the official station for UH Hilo Vulcan basketball. He and wife Kathy have two daughters, and consider themselves big movie buffs.

Damon Castor, Security Guard, Campus Security. Damon Castor joins UH Hilo after working as a security guard at Hilo Medical Center for four years. Prior to moving to Hilo, he retired as a police officer after 25 years with the Dayton Police Department in Ohio. He enjoys being in Hilo and likes to watch his chickens running around the yard acting silly.

Chelsy Rapozo, Fiscal Specialist, Upward Bound Program. Chelsy Rapozo joins the Division of Student Affairs from the Daniel K. Inouye College of Pharmacy where she started working as a student worker after graduating from Kea‘au High School on Hawai‘i Island in 2010. Since then, she has had various roles with the pharmacy college, including student assistant, office assistant, administrative assistant, and lastly, since 2016, administrative and fiscal specialist for the Office of the Dean. She was born and raised on Hawai‘i Island and shares that it feels amazing to be able to work in the community that has raised her. She said when she started going to UH Hilo, she was not sure where her career path would lead her. She is extremely grateful to the administration, faculty, and staff at the pharmacy college for seeing something in her that at the time she says she did not see in herself. Because of her student job there, she declared business administration as her major at UH Hilo and hasn’t looked back since. She feels she is exactly in the field she is meant to be in. When not at work, she spends time with her two-year-old son, which she says is her favorite thing to do.

Reece Uratani, Academic Counselor, Student Support Services Program. Reece Uratani is an alumna of UH Hilo. Born and raised on Hawai‘i Island, he joins us from the Department of Health Early Intervention Program where he served as care coordinator and supervisor for nearly five years. Prior to that, he held various positions at UH Hilo, including research analyst for the adolescent and young adult development longitudinal study, peer tutor for Student Support Services, and research assistant and web developer for the National Student Exchange Program. He shares that it feels great to be back at UH Hilo, like coming back home, although home looks a little different now. For some time, he said he wanted to come back to UH Hilo to contribute to the institution that helped him achieve his academic and career goals. He received his master in counseling psychology and bachelor of arts in psychology from UH Hilo. He enjoys music, especially drums and percussion, video games, and leaning new recipes.

Stephen Villasenor, Director, Upward Bound Program. Stephen Villasenor most recently served as the executive director of Pre-College Programs and the senior director of GEAR UP and Upward Bound for California State San Bernardino. Over the last 10 years, he has secured more than $25 million in grant funding to support pre-college programs for students in the greater San Bernardino area. He is a self-proclaimed proud product of the community college system. He earned his associate of arts in economics from Chaffey College and transferred to Claremont McKenna College where he earned his bachelor of arts in economics-accounting. His graduate degrees include a masters in business taxation from the University of Southern California and a master in economics from Claremont Graduate University. He earned a doctor of philosophy in economics-political science with an emphasis in public choice and public policy from Claremont Graduate University. He has been an adjunct instructor in economics and accounting at Chaffey College, Barstow College, California State San Bernardino, and Argosy University. He shares he is married to a wonderful woman for 15 years, and in his spare time is a coach for his daughters’ soccer and basketball teams.