International Women’s Day 2020 is celebrating a number of missions this year to help forge a gender equal world. A main mission is to celebrate women’s achievements and increase their visibility. Here are ten stories of the past year from UH Hilo Stories doing just that for extraordinary women from the University of Hawai‘i at Hilo.

Hawai‘i Business Magazine named Ka‘iu Kimura a member of the publication’s 11th Annual “20 for the Next 20” cohort. Kimura is executive director of ‘Imiloa Astronomy Center at the University of Hawai‘i at Hilo. She is being honored for bringing Maunakea to the forefront through educational opportunities that couple the mountain’s culture and history with astronomy. The magazine honors 20 people each year who they believe will have an important and positive impact on Hawai‘i over the next two decades. “They have already proven themselves by their accomplishments, intelligence, charisma, leadership and passion, but we expect even more from them in the future,” states the award description on the magazine’s website.

Michele Ebersole, professor of education, believes educating the island’s K-12 schoolchildren is a collective effort. While the primary work of the university’s School of Education, where Ebersole teaches, is to produce quality teachers for the community, the school does not limit that mission to their own classrooms. “Community outreach and partnerships are an important part of the work that we do in the School of Education,” says Ebersole. “I believe that it is reciprocal in nature: both our community partners and the School of Education mutually benefit from the service work.” Although it can be hard to get Ebersole to talk about her important role in developing and launching initiatives, it is easy to engage her in conversation about overarching goals: to produce the island’s teachers, to honor cultural practices, and to teach graduate and undergraduate students the importance of huihui (joining together) and of bringing aloha into the classroom from pre-school to higher education.

Marina Karides is leading a survey of faculty at UH community colleges to investigate equity in science, technology, engineering and mathematics (STEM) fields. Karides, professor and chair of sociology at UH Hilo, is principle investigator and lead researcher of the $1 million grant from the National Science Foundation’s ADVANCE program, which contributes to the NSF’s goal of a more diverse and capable science and engineering workforce, including the recruitment, retention, and advancement of women in academic STEM fields. “The National Science Foundation is interested in supporting women academic scientists because we know that with diverse representation, we get better science, and phenomena are identified and looked at with different perspectives,” explains Karides. The UH Hilo research team includes university staff, faculty, alumni, and students, along with community experts, who are carrying out qualitative and quantitative research across the seven UH community colleges to evaluate gender equity in STEM.

Justina Mattos, assistant professor of drama and performing arts and an alumna of UH Hilo, grew up attending public schools on O‘ahu and in Hilo. She remembers having more access to the arts in school than she sees now. In addition to her teaching at the university, Mattos also looks for opportunities to reach out to children in local schools, and has added a touring element to her Acting Troupe (DRAM 421) class. Mattos directed performances of three popular children’s plays in ‘ōlelo Hawai‘i (Hawaiian language) in 2018. Students taking the course performed the plays, which Mattos had translated from their English versions into Hawaiian language. The performances took place at the Hilo Public Library and five Hilo elementary schools during the spring 2018 semester.

Tarisi Vunidilo, an expert in indigenous archaeology and new assistant professor of anthropology at the University of Hawai‘i at Hilo, remembers being a student at UH Hilo 26 years ago. Vunidilo began her new position in 2018 and is now heading multiple research initiatives at the university in addition to numerous side projects in language revitalization and art intervention to raise environmental awareness. The common thread that runs through her work is a passion for connecting and sharing the histories of places, artifacts, and indigenous people. A current project is mentoring a small group of anthropology students in a project to identify Hawaiian artifacts housed at the anthropology department. 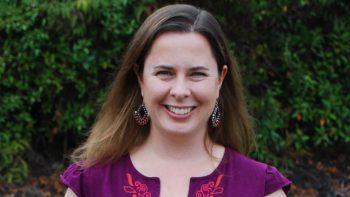 Tracy Wiegner, professor of marine science, says the major motivation in her work is the interaction she has with students and the local community. Her mission is to discover and share as much knowledge as possible about the water quality of Hawai‘i Island’s coasts, especially those near island communities. Her collaborative spirit is proving to be the greatest asset in reaching her goals. Wiegner’s work ethic is student-centered and community-based. For years, she has included students in her research into pathogens in coastal areas around the island, the findings of which arm communities with crucial information that inform remediation and conservation efforts. Wiegner says that being a resource for local communities in this way is a major motivation that drives her to publish her findings.

UH Hilo undergraduate Alexis Cabrera, who did a directed studies project with Professor of Anthropology Lynn Morrison that earned her a slot to present at the annual meeting of the Society for Applied Anthropology, a worldwide organization that met last year in Portland, OR, won 3rd prize out of 90 student submissions (mostly master’s and doctoral projects) for her poster presentation entitled, “This Skull Has A Story: Analysis of a Skull Lacking Provenience.” The work involved a recently acquired skull from a community member that lacked provenience. It was originally acquired under unusual circumstances in North Carolina, and had been housed within a family for over eighty years. The analysis on the skull includes determination of age, sex, ethnicity, and pathology; it has a unique combination of cranial and dental features that indicates a complex history. Cabrera’s presentation included an overview of the cultural context of turn-of-the century North Carolina to gain an understanding of this individual’s origins and thus, story.

Associate Professor Makalapua Alencastre was recognized by the National Indian Education Association for her 40 years of working on the reestablishment of Hawaiian as the primary language of the family and education. Her professional and research interests include Indigenous immersion education-program planning and evaluation, teacher education, and educational reform. As a member of one of the pioneer Hawaiian language immersion families, Alencastre was an early advocate of the Hawaiian language revitalization movement in the 1980s to reestablish Hawaiian as the home language and language of instruction in Hawai‘i schools. She is the founder and former program director for Ke Kula ‘o Samuel Kamakau Laboratory, a Hawaiian language medium public charter school, and currently is a commissioner on the State Public Charter School Commission, which is responsible for 37 schools and 11,000 students throughout the state of Hawai‘i.

Poignant during the current COVID-19 crisis, is the story about UH Hilo business major Sienna Wareham, who is studying abroad in South Korea for one year on a scholarship funded by the host country. She is attending Hankuk University of Foreign Studies on a Korea Global Scholarship. Hailing from Rigby, ID, Wareham is in her third year of study and already a senior. While at Hankuk, in addition to her business courses, she’s also taking classes in Korean history as well as a course on Korean popular culture and Hallyu, which is South Korea’s export industry of pop culture, entertainment, music, TV dramas, and movies. “Studying here will help my overall education in that I’m getting a real global view,” says Wareham. “Here, I have the amazing opportunity to meet not only Koreans but people from all over. We all talk about how different our countries are.”

Marilani Marciel has a broader view about how far her kuleana extends outside of UH Hilo and the local community. This is because Marciel, an office assistant in the Office of Academic Affairs, is an American Red Cross volunteer, and when the call comes, she goes to where she is needed. On the evening of Sept. 3, 2019, this meant flying out of Hilo and arriving in North Carolina the next evening. Hurricane Dorian was bearing down on the state, eventually making landfall along the Outer Banks on Sept. 6. The hurricane packed 90 mph winds with enormous amounts of rain that caused catastrophic flooding. This is what the state was preparing for when Marciel arrived. “As a Red Cross volunteer you go where you are needed, even if it’s in the next county,” she explains. “The job is physical and can be demanding at times. You sleep on cots and eat what the [evacuees] eat—usually food from local churches or schools depending on your shelter location. You’re always on duty and you take your suitcases and backpacks everywhere you go because you never know when and where you’ll be asked to help.”

List compiled by Susan Enright, a public information specialist for the Office of the Chancellor and editor of UH Hilo Stories. She received her bachelor of arts in English and certificate in women’s studies from UH Hilo.