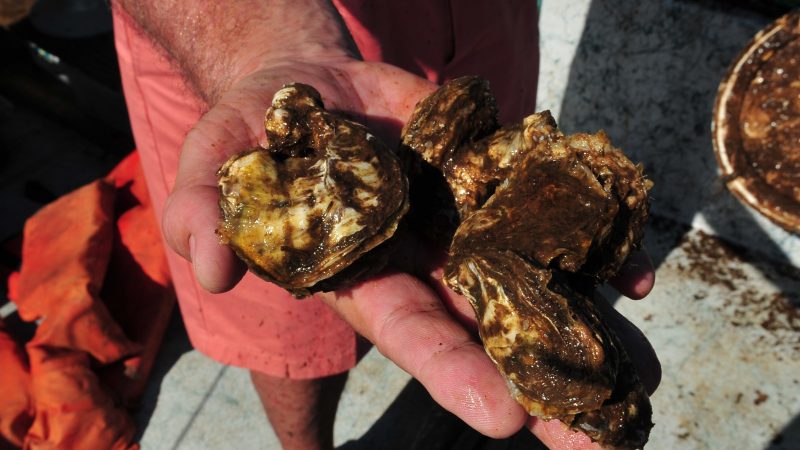 The Pacific Aquaculture and Coastal Resources Center (PACRC) at the University of Hawai‘i at Hilo is working with the U.S. Navy and O‘ahu Waterkeeper to use native species of shellfish to improve water clarity and quality in the Pearl Harbor estuary on O‘ahu. The partnership is the first large-scale effort to use native shellfish species for harbor water quality improvement, modeled on research trials by the UH Hilo aquaculture center with the native Hawaiian oyster species in Hilo Bay.

“We are developing hatchery production methods for native bivalve species, in part because many local species have become rare and may possibly require protection,” says Maria Haws, associate professor of aquaculture and PACRC director. “For example, the black-lip pearl oyster is already a protected species under state law.”

Historically, the Pearl Harbor area was known as “Wai Momi” or “pearl waters.” Native shellfish species were once abundant in the area and are preserved in history through Native Hawaiian chants, songs, and legends.

The project builds on a successful feasibility study conducted by the Department of Land and Natural Resources, Division of Aquatic Resources, utilizing a nonnative species, Crassostrea gigas (known as the Pacific Oyster), as a tool to improve clarity and quality of waters within Pearl Harbor. While the Pacific Oyster survives and grows well in Pearl Harbor and it may continue to be used for bioremediation. The new project will focus on native shellfish species because of their deep cultural significance and in hopes of replenishing and restoring these species to the marine ecosystem.

Native oysters filter between 20 and 45 gallons of water per day, depending on their size, removing harmful pollutants including sediment, bacteria, heavy metals, PCBs, oil, microplastics, sunscreen chemicals and nutrients from the water column, which improves water clarity and quality.

Oysters also remove carbon from the water and use it to build their shells, underscoring their importance in our changing climate and marine environment.

The oysters produced by the project are for restoration only, not for consumption.