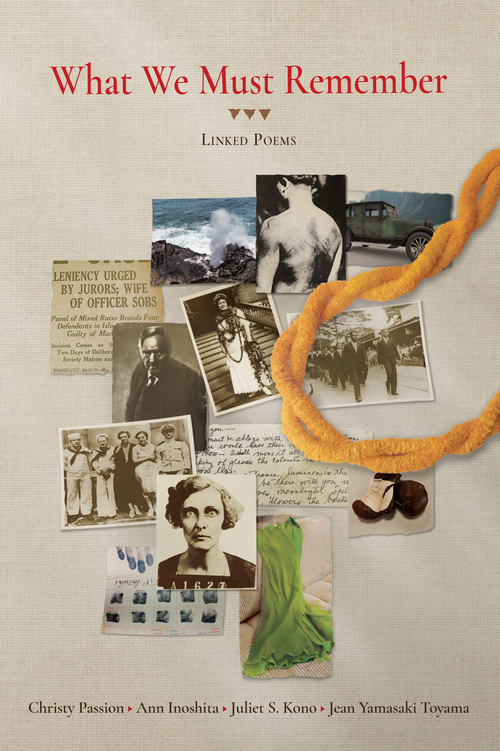 Four treasures of the local literary community have been touring the state over the past year to read from their collection of poems, What We Must Remember: Linked Poems (Bamboo Ridge Press, 2017), a collaborative work that explores the 1932 kidnapping and murder of Native Hawaiian prize fighter Joseph Kahahawai and the subsequent trials.

The quartet, known as the Renshi Poets—Ann Inoshita, Juliet S. Kono, Christy Passion, and Jean Yamasaki Toyama—visited Hawai‘i Community College on Sept. 6, and the University of Hawai‘i at Hilo on Sept. 7, where poetry lovers and history buffs gathered to hear the authors read selected works from their collection.

“Renshi poetry is the modern version of Japanese linked verse,” explains Kirsten Møllegaard, a professor of English at UH Hilo. The English department was a co-sponsor of the Hilo events.

In the renshi method, Møllegaard explains, a group of poets gets together and decides on a common topic and focus of their poetry. Each poet writes his/her verse and passes it on to the next poet, who will use the last line of the previous verse as the first line in his/her own verse. Then that poet passes on the verses to the next poet, who again will take the last line of that verse as the first line in his/her poem. This collaborative effort stretches the poets’ creative minds and facilitates a joint end product that is simultaneously combining individual poetic voices with an overarching general theme.

At the UH Hilo and Hawai‘i CC events, in addition to reading from their collaborative work, the poets also discussed their research on the murder, the trials, interviews with survivors, archival investigations, and their personal responses to each voice.

The Massie-Kahahawai trials are a milestone in Hawai‘i history; see “The Crime That Changed the Islands” (Honolulu Magazine, April 2005).

In 1931, a young Navy wife, Thalia Massie, falsley accused five local men of raping her. They were Horace Ida, David Talai, Henry Chang, Joe, Kahahawai and Ben Ahakuelo. When the jury in the rape trial deadlocked, Thalia’s husband and mother murdered Kahahawai, leading to an even more sensational trial for this “honor killing.”

“Of continuing interest today,” says Møllegaard, “is the fact that the Massie-Kahahawai event articulated several issues that are prevalent in the state of Hawai‘i today: military presence, the legacy of racism, the formation of local identity, and Hawai‘i’s at times contested relationship with mainland American culture and hegemony.”

What We Must Remember (available at Amazon) features 28 linked poems, followed by insightful commentary on each poem by its author.

With an introduction and timeline of events by Massie scholar John P. Rosa, this special issue revisits the 1932 kidnapping and murder of Native Hawaiian prize fighter Joseph Kahahawai and the events surrounding it, commonly known as “The Massie Case.”

Referred to as “one of the greatest criminal cases of modern times” by the Chicago Tribune, the incident was reflective of the racial tensions in plantation-era Hawai‘i and, according to scholar David Stannard in his book Honor Killing, “provided the seedbed for subsequent [social] change” in the local community. In this new book, each poet investigates, interrogates, and brings to light the racial, ethical, and moral complexities of one of Hawai‘i’s most controversial criminal cases, the linked verses interwoven with factual detail to create a mosaic of emotional depth that explores the implications of the historical events that took place and that continue to reverberate today.

“We were fortunate to feature the talented Bamboo Ridge poets at events that allowed our campus communities and the public to hear the poets read from their work,” Møllegaard says. “The poets’ joint reading brought to life the plurality of voices and nuances of perspectives in ways that highlighted not only the complexity of the topic, but also the poets’ artistic methods. It was inspiring to hear how respectful they were of their subject matter, and how conscientious they were of staying true to historical facts. During the Q and A it was clear that the audience was keen to hear more about their research and what guided their creative work.”

Several people who attended the event filled out anonymous surveys to provide feedback for the organizers.

“What pulled me in is that the poets didn’t force us to any conclusion,” writes one person. “They allowed us to reflect and come to our own understanding.”

Another member of the audience comments, “Even though I don’t know the full story of The Massie Case, I found myself immersed upon listening to those poems. It was such a powerful delivery and I was inspired by the messages conveyed through those beautiful and yet so sad poems at the same time.”