Kirsten Paxton and Patrick Hart have started a study funded by the National Science Foundation to research the effects of Rapid ʻŌhiʻa Death on animal communities in Hawaiʻi.

A fungal disease is ravaging native forests on Hawai‘i Island, killing huge swaths of ʻōhiʻa (Metrosideros polymorpha), the most abundant native tree in the state of Hawaiʻi. On Hawaiʻi Island, hundreds of thousands of ʻōhiʻa have already died from the fungus, Ceratocystis. Healthy trees die within a few days to a few weeks, hence the name Rapid ʻŌhiʻa Death or ROD. The disease has killed trees in all districts of Hawaiʻi Island and has the potential to kill ʻōhiʻa trees statewide.

So far, ROD research has concentrated on understanding the pathology of the disease, how it is spread, and the impacts of it on ‘ōhi‘a trees. But the decimation of the trees is destroying native forests as a whole, and in turn, posing a serious threat to the plants and animals that depend on healthy ecosystems created by ‘ōhi‘a trees.

This summer, UH Hilo biologists started a one-year study on the effects of ROD on animal communities in Hawaiʻi. The research is funded by a $197,000 grant from the National Science Foundation’s Grants for Rapid Response Research or RAPID program. The project is entitled “RAPID: Cascading effects of rapid and widespread mortality of a foundation tree species on animal communities in Hawai‘i.”

“[T]here has not been an examination of how ROD is affecting animal communities reliant on ‘ōhi‘a forests, which is an important nesting substrate and food resource for both insectivorous and nectarivorous Hawaiian forest birds, 57 percent of which are threatened or endangered,” explains lead scientist on the study Kristina Paxton, an adjunct assistant professor in the UH Hilo tropical conservation biology and environmental science program. “Given the foundational role of ‘ōhi‘a in Hawaiian forests as the dominant tree in the canopy, widespread or total loss of ‘ōhi‘a would likely be catastrophic for endemic Hawaiian forest birds.”

Acoustics: Recording the animal sounds of the forest as an indicator of biodiversity

Paxton is working on the study with colleague Patrick Hart, a UH Hilo professor of biology and a specialist in conservation of Hawaiian forests and forest birds. The team will be basing the research on high-tech recorded acoustics—bird song and other animal sounds of the forest—using technology out of the UH Hilo bioacoustics lab called the Listening Observatory for Hawaiian Ecosystems or LOHE, which was founded by Hart.

Paxton says the project will use advances in recording technology to continuously record over an extended period of time the entire sound-producing animal community within ‘ōhi‘a forests across Hawaiʻi Island. 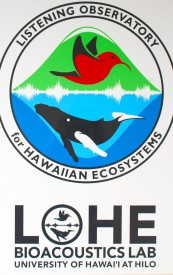 “By using soundscape analysis tools developed within the growing field of soundscape ecology, we will be able to rapidly assess changes in the biodiversity of audible birds, insects, and amphibian species associated with the mortality of ōhi‘a across the landscape,” she says.

The research also will evaluate whether the diversity and composition of understory plant species moderates how reliant animal communities respond to the loss of a dominant forest tree species.

Paxton says the use of soundscape to assess ecological change could serve as a model in studying a range of ecosystems outside Hawaiʻi.